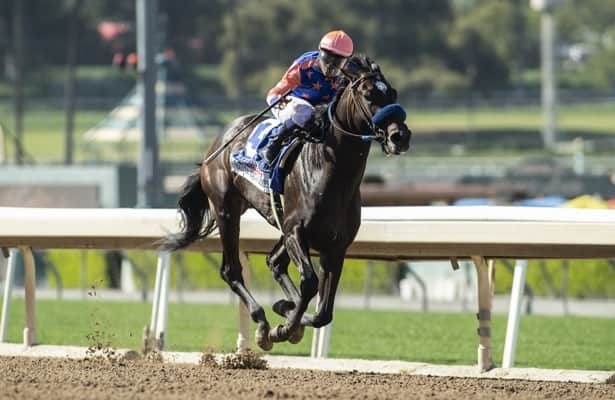 Undefeated in a trio of starts, Rock Your World won his debut on New Year’s Day in a six-furlong turf sprint. He followed up with a sharp 2 1/4-length victory in the listed Pasadena Stakes at a mile over the Santa Anita lawn. He has $546,600 in earnings and 100 qualifying points for the 2021 Kentucky Derby.

Half of the last dozen Santa Anita Derby winners hit the board in Kentucky. Justify (2018), California Chrome (2014) and I’ll Have Another (2012) wore the roses; Exaggerator (2016) and Pioneerof the Nile (2009) finished second. Dortmund (2015) placed third. Justify, California Chrome, I’ll Have Another, and Exaggerator won the Preakness Stakes. Justify is the only Santa Anita Derby winner to hit the board in the Belmont Stakes in 12 years.

Pedigree: Rock Your World (Candy Ride (ARG) - Charm the Maker, by Empire Maker) has the breeding and conformation to handle classic distances. In his last two starts, the long-striding colt switched leads a couple of times through the stretch. (See Rock Your World's pedigree chart here.)

Candy Ride, a champion miler in his homeland of Argentina, captured his initial California start, a 1 1/16-mile dirt allowance event, by three lengths. He returned to post a three-quarter length victory in the nine-furlong American Handicap over the Hollywood Park turf course. In what would be the last race of his career, Candy Ride made short work of Medaglia d’Oro in the 1 1/4-mile Pacific Classic, dominating by 3 3/4 lengths. He set a track record in 1:59.11 in 2003, which still stands.

Rock Your World’s distaff line is filled with winners. Four of his first five dams are stakes winners and blacktype producers. Additionally, he and 2019 Kentucky Derby winner Country House are distant relations; they share the same fifth dam, Like a Charm (Pied D’or).

Rock Your World is the second foal and second blacktype earner out of multiple stakes winner Charm the Maker. His full sister She’s Our Charm is successful as a turf miler and was third, bested only three-quarters of a length, in last year’s 1 1/8-mile Robert J. Frankel Stakes (G3), over the Santa Anita lawn after setting the pace.

The pair have a full 2-year-old brother, He’s Our Maker, a yearling half-sister by Curlin, and a new 2021 full sister.

Charm the Maker (Empire Maker - Charm the Giant (IRE), by Giant’s Causeway) was bred by Ron and Deborah McAnally and trained by Ron McAnally. The mare was in the money in eight of 19 starts, with earnings of $340,290.

She was a precocious 2-year-old, winning her debut on the Del Mar Polytrack and following up with a third-place finish in the 1 1/16-mile Oak Leaf Stakes (G1) over the Santa Anita dirt. She showed a fondness for Del Mar and won the Sharp Cat Stakes next out.

The following year, Charm the Maker decided she preferred Polytrack and turf. She missed the victory by a half-length in the Unzip Me Stakes to Byrama (GB) (who, incidentally, is the dam of Known Agenda) and was third in the one-mile Autumn Miss Stakes (G3). As a 4-year-old, Charm the Maker was in the money twice, winning the Adoration Stakes and finishing third in the Swingtime Stakes.

Charm the Maker’s half-brother Liam the Charmer (Smart Strike), also bred by the McAnallys, fittingly won the John Henry Turf Championship Stakes (G2) at 1 1/4 miles over the Santa Anita turf. He was third in the San Gabriel (G2) and the Rainbow Stakes, both at nine furlongs.

Rock Your World’s second dam, Charm the Giant (IRE) (Giant’s Causeway), finished off the board only three times but spent much of her career in the allowance/optional claiming class as a turf miler. Charm the Giant’s best season was as a 5-year-old. She captured the Wilshire Handicap (G3), plus the Hillsborough and Intercontinental Handicaps, and dead-heated for third (placed second on DQ) in the Tuzla Handicap.

Rock Your World’s third dam, Olympic Charmer (Olympio), was conditioned by McAnally, and she did her best work as a dirt sprinter. She was out of the money only four times in a 16-race career and captured a pair of Grade 2s, the Railbird Stakes and El Encino Stakes, plus two listed events. Olympic Charmer placed in the La Brea (G1), plus, in one of her rare ventures from California, was best of the rest in the Bonnie Miss Stakes (G2) behind ill-fated sensation Three Ring.

Empire Maker’s daughters produce winners over all surfaces and at all distances. Empire Maker also is the damsire of Risen Star (G2) champ Mandaloun.

Rock Your World will attempt to follow Apollo and Justify’s lofty hoofprints to win the Derby without competing as a 2-year-old. Both he and Justify started thee times before the Derby, at a sprint, mile, and nine furlongs. Their Santa Anita Derby final times are comparable, 1:49.72 for Justify, with a 12.70 final eighth, and 1:49.17 for Rock Your World, with a 12.90 final eighth. They even have similar pace-pressing/setting running styles.