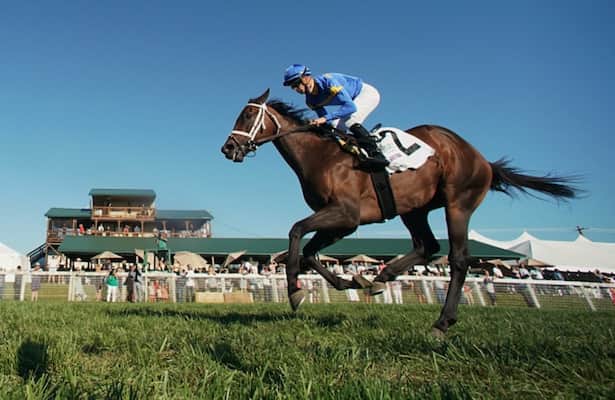 The $200,000 Jessamine Stakes (G2) is the highlight of Wednesday’s racing at Keeneland. The 1 1/16-mile event over the lawn is the U.S. finale in the 2021 Breeders’ Cup Challenge race series, which began last December.

The Jessamine winner earns a berth in the Juvenile Fillies Turf starting gate at Del Mar.

Billed as race 8, the final of the day, the Jessamine drew an oversubscribed field of 16 2-year-old fillies. No rain is in the forecast, and the turf should be firm.

All speed ratings are Brisnet Speed Ratings. All statistics are compiled from Stats RaceLens.

Let’s review the fillies most likely to hit the top four spots.

No. 3 Turnerloose (5-2) is the impressive five-length winner of the one-mile Kentucky Downs’ Juvenile Fillies Stakes. The Brad Cox trainee has won both of her starts in front-running style, and in a race filled with closers, Turnerloose may be hard to catch. Cox and jockey Florent Geroux teamed to win last year’s Jessamine with Aunt Pearl.

No. 12 Dressed (9-2) captured two of her three career starts, the last being a 6 1/2-furlong allowance optional claiming event at Kentucky Downs over a field of 11 rivals. Piloted by Joel Rosario, Dressed hugged the rail through much of the race. She faced a wall of horses in the stretch and squeezed through a narrow opening. Once in the clear, the Wayne Catalano trainee opened up to win by 3 1/2 lengths in a hand ride, and Dressed gained valuable experience in navigating her way through a full field. The race yielded a next-out winner and a runner-up performance. Dressed gets a jockey switch to Flavien Prat, who has won or placed in three of four turf routes this meet.

Dressed is a daughter of More than Ready out of a daughter of Lohnro. Her dam is a half-sister to Maqsad, a 10-furlong listed winner in Great Britain. Dressed’s third dam Aquarelliste is a three-time Group 1 winner in France, and she placed second in the Arc de Triomphe (G1) and Hong Kong Vase (G1). Dressed outclassed maidens by 5 1/4 lengths at 1 1/16 miles in her second start, and she is one of two fillies in the Jessamine with a victory at the distance. Win contender.

No. 14 Diamond Wow (8-1) scratched from the Alcibiades (G1) in favor of another chance on turf.  In her debut, she beat Jessamine rival Opalina by three lengths at Gulfstream Park. Her 1 3/4-length victory in the seven-furlong, off-the-turf Our Dear Peggy Stakes proved Diamond Wow is capable over all surfaces. Patrick Biancone has three juvenile stakes winners from six starters in the last five years. Mike Smith picks up the mount, and he may hustle Diamond Wow to the early lead.

A daughter of Lookin at Lucky, Diamond Wow is out of Patriotic Dimond, a restricted stakes-winning half-sister to multiple graded winner Diamond Oops, who is also by Lookin at Lucky. Diamond Oops is a graded-stakes earner of $1,362,340 in 22 starts and most recently was second in the Turf Sprint Stakes (G3) at Kentucky Downs. Two turns should suit Diamond Wow, but she is hampered by a far outside post. Exotics.

No. 10 Misthaven (6-1) overcame trouble and graduated in style in her debut at Kentucky Downs. Stuck in traffic in the 12-horse field, Tyler Gaffalione had to check Misthaven around the six-furlong marker. They took the turn five wide, and the Joe Sharp trainee put in a powerful move one furlong from home to win by 1 3/4 lengths. Misthaven earned a Brisnet late-pace speed rating of 96, one of the highest in the field.

If they draw in, Blissful and Haughty are worth a look.

No. 15 AE Blissful (12-1) graduated at first asking in a 1 1/16-mile maiden event over the Saratoga lawn in August. Benefiting from a well-timed ride from Luis Saez, Blissful circled the field and mowed them down late, getting up to win by a head. The Cherie DeVaux trainee earned a late-pace speed rating of 95, which fits with this group.

Blissful is a daughter of Empire Maker out of a two-time winner of the Senator Ken Maddy Handicap (G3), and Blissful’s full sister Keri Belle is a Grade 3-winning turf miler. As a closer, Blissful can drop back and get a good position so she doesn’t have to go wide around the first turn. Exotics.

No. 16 AE Haughty (8-1) was a three-length winner in her one-mile debut at Belmont but was disqualified to third place after bulling her way to the outside and bashing into Diamond Hands, who finished third. But second-place finisher Gal in a Rush benefited from the disqualification, and she returned to finish second in the Matron Stakes (G3).

By Empire Maker out of a daughter of Kingmambo, Haughty is bred to run all day. Her War Front half-brother Souper Colossal won the Tyro and Sapling Stakes as a 2-year-old and the Texas Glitter, a turf sprint, at 3. He also placed in the nine-furlong West Virginia Derby (G2). The far outside post might be difficult to win from, but this Chad Brown trainee could be talented enough to hit the board. Exotics.

Favorites finished out of the money only three times in the last decade. Pace pressers and closers won the majority of the time, but the previous two editions of the Jessamine were won by pacesetters. Winners broke from posts 1 through 8 over the last decade.

With no speed to her inside, Turnerloose can grab the rail and take the short way around the track. She is a confirmed front-runner with high cruising speed, although she might be hounded by Diamond Wow to her outside.