Pedigree Stars: Wit vs. Gunite in the Champagne Stakes 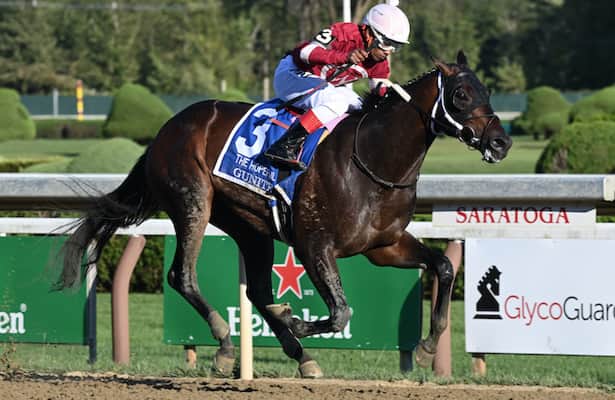 The Grade 1, $500,000 Champagne Stakes at Belmont Park is New York’s final qualifying prep for the Breeders’ Cup Juvenile. The prestigious event is also is a 2022 Kentucky Derby qualifier, with a points scale of 10-4-2-1.

The one-mile event is a relatively good benchmark of Breeders’ Cup form. Seven of the last 10 Champagne winners competed in the Juvenile, and five of them hit the board.

The Champagne Stakes is billed as race 8 of 11 at Belmont Park. Post time is 4:40 p.m. EDT, and the track should be fast.

Pletcher’s bid for his sixth Champagne victory since 2010 could be foiled by Steve Asmussen’s Gunite, who handed Wit his only loss in the Hopeful Stakes (G1). Asmussen won last year’s Champagne Stakes with Jackie’s Warrior.

Gunite’s Hopeful performance earned him one of the month’s highest juvenile stakes speed figures, and you can check out his pedigree here.

Wit had a nightmare trip in the Hopeful. He stumbled at the start and had to make a sustained drive to get into contention in the stretch. The son of 2016 Champagne winner Practical Joke was clearly tired, but his class kept him in second place, three lengths in front of third-place finisher Kevin’s Folly.

Wit drew the rail in the Champagne and was installed as the 2-1 favorite, while Gunite will break from post five and has morning-line odds of 4-1.

No. 2 My Prankster (5-2) enters the Champagne Stakes off an eye-catching 10-length victory against maidens at Saratoga. The race produced next-out winner Cogburn and two runner-up finishes from Seal Beach and Fromanothamutha. My Prankster teamed with Wit for their final Champagne tune-up, getting five furlongs in 1:01.84. Wit, racing on the inside, moved easier while My Prankster was urged to keep pace through the stretch and past the wire.

No. 3 Jack Christopher (9-5) graduated at first asking by 8 3/4 lengths. Although the Chad Brown trainee broke on top, he was content to press a 21.83 first quarter. Jack Christopher eyeballed the pacesetter through a 44.61 half, then opened up, getting five furlongs in 56.77 and six furlongs in 1:09.85. By Munnings out of a half-sister to Grade 1-winning sprinter and sire Street Boss, Jack Christopher is bred for speed, and he owns the field’s highest speed figure of 99. He tuned up for the Champagne with a bullet five-furlong move in 1:00.0.

No. 6 Commandperformance (10-1) did not break well in his debut and ate mud through much of the race. But once the Pletcher trainee saw daylight in the stretch, he took off and gained ground with every stride. The pretty gray son of 2011 Champagne winner Union Rags is out of a stakes-placed Tapit mare and will appreciate the extra distance.

No. 4 Kavod (50-1) was not a happy camper at the Spa on dirt or turf and was thrashed by a combined 35 lengths in both stakes. But he graduated at Belmont and finished second, beaten 3/4 length in the Tremont. James Chapman gave the son of Lea a second-to-last bullet breeze of five furlongs in 1:00.2. If you like long shots and think Kavod will improve his form now that he’s back at Belmont, here’s your chance.

Favorites have finished first or second in eight of the last 10 editions of the Champagne. No particular running style is favored. The majority of the Champagne winners since 2010 have carved out careers as sprinter/milers.

The Champagne Stakes might not be as clear-cut as we think. Gunite might go to the front and tangle with the speedy Jack Christopher, giving Wit a chance to get revenge. But Gunite might have tactical speed since he closed from off the pace in his first two starts. My Prankster could be in the mix, and don’t ignore Commandperformance.