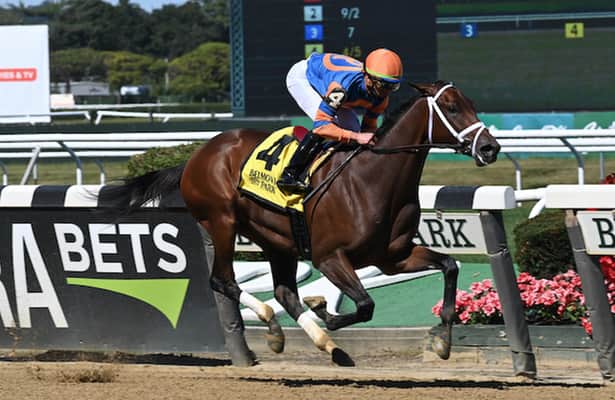 The $250,000 Demoiselle Stakes (G2) is an opportunity for juvenile fillies to test their stamina at 1 1/8 miles and to pick up qualifying points for the 2022 Kentucky Oaks.

Wonder Gadot (2017) earned Canadian honors as a 2 and 3-year-old, including Horse of the Year when she bested the boys in the Queens Plate and Prince of Wales Stakes. She also finished second in the Kentucky Oaks behind eventual Champion 3-year-old Filly Monomoy Girl.

Stating the obvious, Nest looks like the one to beat. After a dominating five-length score against maidens, the Pletcher trainee cut back to a mile in the Tempted Stakes. Nest was slow out of the gate, but finishing a fast-closing third, beaten only three-quarters of a length. Win contender.

Pedigree: Nest (Curlin - Marion Ravenwood, by A.P. Indy) is bred to run all day, and her full brother Idol is a Santa Anita Handicap (G1) winner and half-brother Dr Jack is multiple stakes-placed, so the class is there.

Magic Circle regressed in the Frizette (G1) in her second start but returned with a reasonable effort in the Tempted, holding off Nest by a neck. She bore out in the stretch, which could have cost her the win; however, her gallop out wasn't as energetic as Nest's and the winner Gerrymander. Exotics.

Pedigree: Magic Circle (Kantharos - Magic Humor, by Distorted Humor) has a sprinter/miler pedigree. She's the first blacktype earner in her immediate family, and her second dam, Barracks Road, is a multiple stakes-winning turf miler. There's plenty of class in the third generation of this distaff line, including Grade 3 winners Flying Scotsman and Leigh Court.

A pair of last-out maiden winners from the barns of Clement and Mott could post an upset.

In her one-mile debut at Belmont, Tap the Faith dove towards the rail when the gat opened and had to be straightened out, leaving her in last place. She was hard-held at the back of the pack early, then showed athleticism cutting the corner and battling to the wire to win by a head. The Christophe Clement was full of run and galloped out miles in front of the field. One of her rivals has started and finished third in their next outing. Win contender.

Pedigree: Tap the Faith (Tapit - Embellish the Lace, by Super Saver) is the first competitor out of Alabama Stakes (G1) heroine Embellish the Lace. That one is a half-sister to Travers (G1) winner Afleet Express and multiple stakes winner Reporting For Duty. Florida Derby (G1) winner Materiality and Kentucky Oaks runner-up My Miss Sophia are also part of the family.

Nostalgic closed into a glacial pace to win her 1 1/16 mile debut at Belmont by a decisive 7 3/4 lengths. However, I'm not sure what she beat, as only two rivals have returned, both finishing off the board. Bill Mott won the 2019 Demoiselle with Lake Avenue and in 2007 with Mushka. Both were last-out maiden winners, although the Demoiselle was their third start. Exotics.

Pedigree: Nostalgic (Medaglia d'Oro - Been Here Before, by Tapit) is the first competitor out of a stakes-placed miler. Her second dam Connie Belle is a stakes-winning turf miler and a half-sister to Grade 1 winner Bob and John.

After winning her maiden, Miss Interpret looked like a good thing at Saratoga when she captured the off the turf P. G. Johnson Stakes. But, draw a line through her Alcibiades (G1) performance; she was off slow and never got involved. The Demoiselle is a good chance for her to regroup. The "other" Pletcher trainee looks like a Live longshot.

Pedigree: Miss Interpret (Street Sense - All Mettle, by Touch Gold) is by a Kentucky Derby hero, out of a daughter of a Belmont Stakes winner, with another Kentucky Derby winner as her second damsire, so it's safe to say that Miss Interpret should be able to run all day. She's the first stakes earner in her immediate family. However, Her dam's half-sister Paulassilverlining won the Matron (G2) as a juvenile and earned $1,516,230 in 23 starts. Half-brother Dads Caps was juvenile placed and was a back-to-back Carter Handicap (G1) winner.

Yes, Full Count Felicia is still a maiden, and yes, she is bred for the turf. However, she could be the lone speed of the Demoiselle and looks like she handles the dirt just fine in morning works. She made the pace in her last start, only to miss by a head on the wire. The Chad Summers trainee resented the whip, lashing her tail, and she was intimidated in close quarters on the rail as she fought through the stretch. However, Full Count Felicia drew the far outside post, and if Tyler Gaffalione keeps her in the clear, she has a longshot chance of messing up the superfecta. Live longshot.

Pedigree: Full Count Felicia (War Front - Claire de Lune (IRE), by Galileo (IRE)) hails from a family filled with international Group winners. Her dam is French listed placed at 1 1/4 miles, and the rest of the stakes winners in the family are successful from a mile to 1 1/2 miles.

Venti Valentine puts her unbeaten two-race record on the line in the Demoiselle. She was much the best in the restricted Maid of the Mist Stakes, clearing the field by 3 1/4 lengths. She likes to win, which puts her one up on the field. Exotics.

Venti Valentine (Firing Line - Glory Gold, by Medaglia d'Oro) should handle the stretch out; however, her sire's offspring are making their names as sprinter/milers. Venti Valentine's half-sister Espresso Shot has earned $516,625 in 24 starts as a multiple restricted stakes-winning sprinter miler.

Golden Essence got the job done by a nose in her fourth start, a one-mile and seventy yards maiden event at PARX. It took her the entire length of the stretch to grind out the victory and looks up against it here. Toss.

Pedigree: Golden Essence (Super Saver - Sinister Tale, by Tale of the Cat) has a miler pedigree. Her stakes-placed dam owns the only blacktype in two generations of the distaff line, and the most accomplished runner in the third generation is Grade 3-winning sprinter Wacky Patty.

Most of the previous five Demoiselle winners were pacesetters or pressers, and the favorite hit the board in four of the last five editions.

The pacesetter could be Full Count Felicia, although Nest and Magic Circle could be right there, and Tap the Faith could be closer with a better start.

Nest gets the nod over Tap the Faith, as Nest has the experience and two starts under her girth.