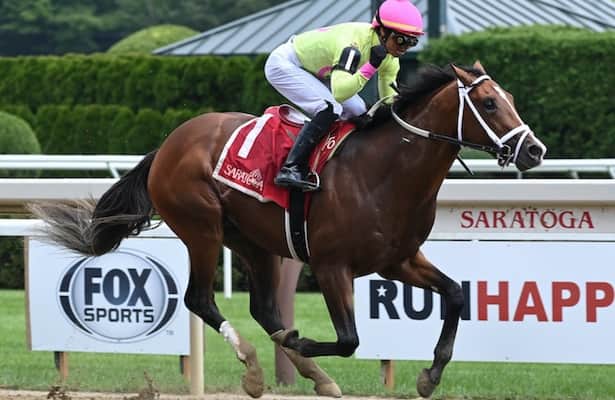 The $200,000 Funny Cide Stakes for 2-year-old colts at Saratoga on Friday is one of two New York-bred juvenile races of the day, along with the Seeking the Ante for juvenile fillies.

In the seven years since the inception of the Funny Cide Stakes, six winners went on to win listed stakes and become graded placed. The inaugural winner, Upstart (2014), placed in the Champagne (G1) and Breeders’ Cup Juvenile. The following year, he was a leading contender on the Kentucky Derby trail, winning the Holy Bull (G3) and placing in the Fountain of Youth (G2) and Florida Derby (G1).

The 6 1/2 furlong Funny Cide over the main track attracted eight colts and is carded as the fourth race. Six of the eight colts enter off a victory.

#7 Run Curtis Run (7-2) beat three others in the Rick Violette Stakes by 3 3/4 lengths without a serious challenge. While the Mike Maker trainee’s speed figures are on the low side, Run Curtis Run is the only one in the field with two starts under his girth, and he’s the class of the Funny Cide field.

#8 Daufuskie Island (9-2) pressed the pace in his debut here 15 days ago before drawing clear in the stretch by five lengths over Who Hoo That's Me. The son of Goldencents was professional, switching leads on cue and keeping a straight path, and earned a 93 Brisnet speed figure for his effort. IN the last three years at Saratoga, Jeremiah Englehart’s 2-year-olds return to win their second start an impressive 40 percent of the time.

#1  Senbei (6-1) splashed home by 4 3/4 lengths here in July, earning an 85 speed figure. The Christophe Clement trainee didn’t beat much; none of his competitors hit the board in their next start. In the last five years, Clement’s juveniles have won their second start at a 23 percent clip.  Senbei, a son of Candy Ride, is a half-brother to two multiple restricted winners, Filibustin and Indy’s Lady, plus Man O Manassas, a stakes-placed runner.

#5 Montebello (3-1) led the entire way, holding on by a head in his six-furlong debut at Del Mar for Bob Baffert. The $400,000 Keeneland yearling purchase didn’t switch leads until strides from the wire but, despite this shortcoming, earned a high 90 late-pace speed figure. The son of Curlin is out of a multiple restricted stakes-winning sprinter/miler, and his second dam Beautiful America was New York’s 2002 champion juvenile filly. Baffert rarely ships his 2-year-olds to New York, especially for their second start. He hasn’t had success with this angle the few times he has done so.

#3 Shipsational (8-1) splashed home by 6 3/4 lengths in the Saratoga mud after tracking the early pace. It was a sharp debut – but two rivals returned from that race to finish out of the money, so what did he beat?  Baker has one winner from 23 second-time out 2-year-old starters in the last five years. Shipsational’s speed figures are middling, so perhaps an exotic placing is possible.

#6 Bourbon's Hope (6-1) showed plenty of zip while graduating at first asking at Belmont. He hooked in an early speed duel, put away his rival and held off a half-hearted challenge to win by three lengths. The Charlton Baker trainee was flagging his tail but kept a straight path down the stretch. Bourbon’s Hope’s late-pace speed figure is the slowest in the Funny Cide field.

#4 Who Hoo Thats Me (12-1) tracked the pace on the outside in his Saratoga debut. He ranged up three wide and was all out to catch Daufuskie Island but had to settle for second best. This son of Keen Ice, out of a winning daughter of Hard Spun, is bred to love classic distances and to improve with maturity, so the extra distance will help – especially if there’s an early speed duel.

#2 Happy Happy B (6-1) dueled down the stretch and put away the third-place horse but didn’t see the winner blow by them strides from the wire. Happy Happy B and third-place finisher Surprise Boss were clearly tired and going up and down in the stretch. Although Happy Happy B’s half-brother is the precocious and classy Kentucky Jockey Club (G2) winner Keepmeinmind, Happy Happy B will need to improve in his second start. Trainer Robertino Diodoro 2-year-olds win 12 percent of the time in their second start.

There’s plenty of early speed in the Funny Cide field. Five of the eight colts either set or pressed the early pace in their debut, so it’s hard to know who will rate.