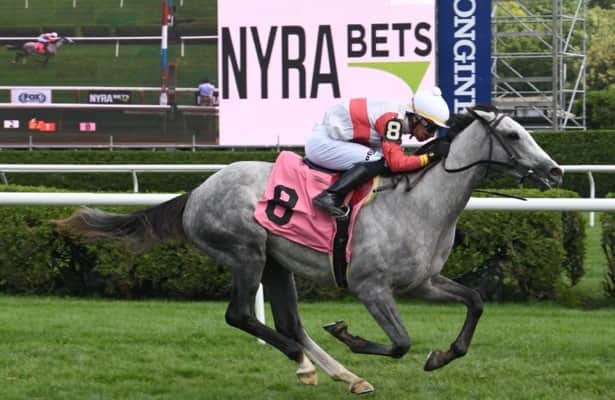 Wednesday’s feature at Saratoga is the Grade 3, $150,000 With Anticipation Stakes for 2-year-olds navigating 1 1/16 miles over the lawn.

This year, seven colts line up in the With Anticipation, carded as race 9 with a post time of 5:39 p.m. EDT. The turf should be firm.

#1 Limited Liability looks like the one to beat after his eye-catching debut on the Saratoga lawn in July. The pretty gray son of Kitten’s Joy made a powerful move from the back of the pack to beat maidens by 2 3/4 lengths.

Limited Liability is a descendant of the multiple graded producer Meghan’s Joy, whose offspring include graded winners Hunting, Ironicus, Norumbega, On Leave and Quiet Harbor.

The Shug McGaughey trainee owns the highest Brisnet speed figure and late-pace figure in the field and is the one to beat. McGaughey's turf juveniles have a 15 percent win rate second time out, and Jose Ortiz is winning turf routes at 14 percent this meet.

#4 Portfolio Company also graduated at first asking over this track and distance in July. The Chad Brown trainee tracked the pace on the rail, then switched to the outside and took over. The bay son of Kitten’s Joy held off the swift closing James Aloysius by three-quarters length. Portfolio Company owns the second-highest late pace speed figure on turf in the With Anticipation.

Portfolio Company has two stakes-winning full brothers; Charming Kitten, a multiple graded-winning turf router third in the 2012 With Anticipation Stakes, and Queen’splacekitten, who is also multiple graded placed on the lawn and Polytrack.

Chad Brown’s turf juveniles win a remarkable 32 percent of the time in their second outing. Irad Ortiz Jr. is winning turf routes at 19 percent this meet.

#3 Gooch Go Bragh closed for second while impeded by traffic in his debut. But it was a reasonable effort, and he galloped out in front of the winner. His 78 speed figure is lower than the top pair’s effort, but he has every right to improve in his second start.

The Chestnut son of Distorted Humor is out of a stakes-placed daughter of Giant’s Causeway, herself a half-sister to the Grade 1 winning turf mare Arunda.

#6 Coinage was under a stranglehold behind pacesetter Run Curtis Run on the main track in the restricted Rick Violette Stakes at six furlongs. This proved to be the wrong strategy as Run Curtis Run opened up on the field while Coinage could not improve his position.

Mark Casse switches things up, sending Coinage long on turf. The trainer is successful with 18 percent of his 2-year-olds switching from dirt to turf. But Junior Alvarado has zero wins from 36 mounts in turf routes this meet.

Coinage is by Tapit out of Bar of Gold, a Breeders’ Cup Filly & Mare Sprint winner. Coinage should have no difficulty with the turf transfer; Tapit babies win 15 percent in their initial turf races at a route. Additionally, there is turf black type in the second generation of Coinage’s female family; his dam’s half-brother Homeland is stakes place on the lawn, and his second dam Khancord Kid is a Grade 3 winner on turf.

#5 Kavod tries a surface and distance switch and takes the blinkers off with hopes of a better result after he threw a clunker in the Sanford (G3), never firing and finishing 15 lengths behind Wit.

James Chapman has not been successful with the dirt-to-turf angle; in the last five years, he has had 23 starters, with no wins. Additionally, Manny Franco has an 8 percent win rate in turf routes this meet.

Kavod may do well on the lawn. Sire Lea’s juveniles win at 15 percent of their first turf outings, and five of Kavod’s half-siblings have won or placed on turf, including two stakes-placed runners, Gran Brandy and Sirilanka.

Ready to March is the first turf runner for his sire Tom’s Ready, a multiple graded-winning dirt sprinter. However, the colt has “turfy” bloodlines through his distaff side. His dam was in the money six of 13 tries as a turf sprinter, and his damsire War Front is a leading sire of turf black-type earners.

Chapman has a poor dirt-to-turf record, and jockey Castro Rodreguez hasn’t hit the board in seven attempts in turf routes this meet.

#2 Silipo graduated in his dirt sprint debut against maiden claimers and was promptly claimed by Bruce Brown. Brown has one winner and four in the money in the last five years with the surface switch in the first start after the claim.

The son of Candy Ride is a half to two black-type earners: stakes winner and Grade 3-placed Not that Brady and juvenile stakes-placed Lisa’s Legacy, who won her debut on the lawn.

The With Anticipation Stakes lineup is pretty easy to figure out. #1 Limited Liability, #4 Portfolio Company and #3 Gooch Go Bragh are the three most likely to fill out the trifecta. The well-bred #6 Coinage could fill out the superfecta.