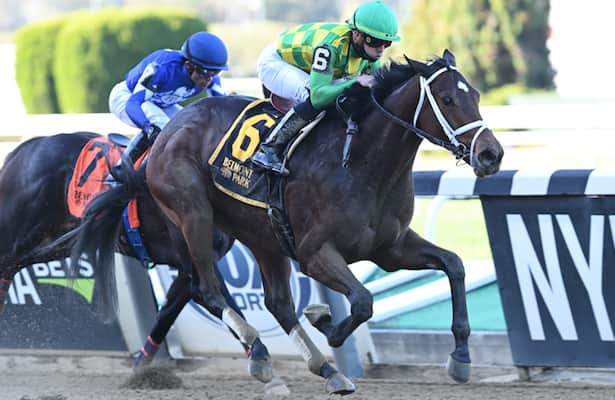 The $250,000 Remsen Stakes (G2) on Aqueduct's opening weekend offers 2-year-olds the chance to compete at 1 1/8 miles for the first time in a stakes. The top four finishers of each race will earn 10-4-2-1 points toward inclusion in the 2022 Kentucky Derby.

In the last decade, colts who placed in the Remsen also affected the Kentucky Derby Superfecta. Mucho Macho Man (2010) finished third in Kentucky, and Frosted (2014), Wicked Strong (2013) and Normandy Invasion (2012) finished fourth. The last colt to pull off the Remsen/ Kentucky Derby double was Thunder Gulch in 1994.

Fast forward to this year, where eight colts will compete in Saturday's eighth race, with a post time of 3:14 PM EST.

After winning his six-furlong debut at Belmont, Zandon takes on winners at nine furlongs. The Chad Brown trainee won his initial start by 1 1/2 lengths in a sharp 1:10.61 after tracking the early pace. This might become a key race because the second through fourth finishers returned to win or place in their next outing. Zandon recorded a second-to-last bullet five furlongs move as a Remsen prep. Brown and Jose Ortiz teamed to win the 2014 Remsen with Leave the Light On. Win contender.

Pedigree: Zandon (Upstart - Memories Prevail, by Creative Cause) has a miler/middle distance pedigree. He is the first foal out of an unraced half-sister to a pair of stakes-winning turf milers, the full sisters Cariba and Cairo Memories. This family produced Grade 3-winning turf milers Hay Dakota and Significant Form plus restricted dirt sprinter Hello Hot Rod, winner of this year's Jimmy Winkfield Stakes.

Mo Donegal got the job done in his second start when he stretched to 1 1/16 miles at Belmont. Irad Ortiz Jr. kept him four to five wide the entire way, and although Mo Donegal looked a little leg weary, he gained ground through the stretch to beat Fromanothamutha by 1 1/2 lengths. Todd Pletcher won the 2012 Remsen with Overanalyze. Win contender.

Pedigree: Mo Donegal (Uncle Mo - Callingmissbrown, by Pulpit) has middle distance/classic breeding and conformation. His second dam Island Sand is the most accomplished competitor in the family. She's a multiple graded-stakes earner of $1,182,777, including victories in the one-mile Acorn (G1) and 1 1/4 mile Delaware Handicap (G2) and a second-place finish in the Kentucky Oaks.

Who Hoo Thats Me faced winners for the first time in the restricted Sleepy Hollow Stakes over a sloppy Belmont track. He had a good trip with every chance to run down the winner, but the Jorge Abreu charge backed off when second-place finisher Overstep moved out to challenge. Who Hoo Thats Me has a slower maturing pedigree, and he is still finding his stride. Exotics.

Pedigree: Who Hoo Thats Me (Keen Ice - Calculation, by Hard Spun) is bred to run all day. Keen Ice is infamous for upsetting American Pharoah in the 2015 Travers Stakes (G1); he also won the 1 1/4-mile Suburban (G2). Damsire Hard Spun was best between seven and nine furlongs and placed second in the 2007 Kentucky Derby to Street Sense and that year's Breeders' Cup Classic to Curlin. Who Hoo Thats Me is the first foal out of Calculation. The mare's half-brother Saint Dynaformer is turf stakes-placed at nine furlongs.

After beating Fromanothamutha by three-quarters length, Judge Davis returned to finish a distant third in the one-mile Nashua (G3). The Shug McGaughey trainee held third place on the rail all the way around without improving in a mediocre effort. Perhaps he can improve with the dreaded "maiden bounce" out of the way and with first-time blinkers. In the last five years, McGaughey's juveniles hit the board 35 percent their first time wearing the hood. The veteran trainer captured the 2013 Remsen with Honor Code, who earned 2015 Champion Older Male honors. Exotics.

Pedigree: Judge Davis (Distorted Humor - Mylitta, by Sky Mesa) has a sprinter/miler pedigree, and turf may also be an option as the legendary turf sire Kingmambo is his second damsire. Additionally, Judge Davis' dam won her debut over the lawn, and her half-brother Malossol is a Group 3-winning turf miler in Italy. Next Move Handicap (G3) winner Wow Me Free and her son, San Vicente (G2) runner up Treasury Bill are part of the family.

Pedigree: Eloquist (Nyquist - Our Gal El, by Tapit) is bred to handle middle to classic distances. His unraced dam's half-sister Fifth Avenue won the Fashion Stakes and placed in the Adirondack (G2) at 2. A pair of half-sisters bore stakes winners Imprimis, a multiple graded sprinter, Shoplifted, winner of the Springboard Mile, and multiple Grade 1-placed at seven furlongs.

Mr Jefferson has a win/lose cycle going on, and he won his last start against optional claimers at Laurel despite minor trouble in the stretch, where he faced a wall of horses and had to steady slightly. A small hole opened on the rail in mid-stretch, and Michael Sanchez pushed Mr Jefferson through. They turned back a brief challenge to win by 1 1/2 lengths, giving Michael Trombetta his 2,000th victory. Mr Jefferson has been struggling against lesser at Laurel. Toss.

Pedigree: Mr Jefferson (Constitution - Clockstrucktwelve, by Malibu Moon) has classic breeding and conformation. He has a 4 x 2 inbreeding to A.P. Indy, as Constitution is a great-grandson, and Malibu Moon is a son of the legendary stallion. There's little black type in Mr Jefferson's distaff line, with only two stakes winners in three generations: Never Enough Time, a multiple restricted winning sprinter, and Strike the Moon, a stakes-winning sprinter/miler who placed at the Grade 2 and 3 level.

After finishing a distant third against optional claimers as a turf miler, Midnight Chrome hopes to shake up his form with a switch back to dirt. He was a 4 1/2-length winner on the lawn in his second start, but only one rival returned to hit the board. Tyler Servis, son of Smarty Jones' trainer John Servis, gave Midnight Chrome a final bullet gate drill for the Remsen, and Luis Saez takes over the reins. Midnight Chrome might switch back to front-running style, which will give him the best chance to hit the board. I'll take the wait-and-see approach. Toss.

Fromanothamutha is still a maiden after four starts and, although he placed in three of those starts, he was beaten by Judge Davis and Mo Donegal in his last two starts. The Raymond Handal charge is a pacesetter and has lost ground in the stretch in each start. Toss.

Pedigree: Fromanothamutha (Unified - Prevention, by Aptitude) has a miler pedigree. First-crop sire Unified won stakes from seven to nine furlongs. His half-sister Tiz Lately is stakes-placed at 1 mile 70 yards. Although there are minor stakes winners in his family's second generation, the class in his third-generation includes Grade 1 winner Safe Play, dam of Grade 1 winner, and sire Defensive Play.

Favorites have finished second or third in four of the last five editions of the Remsen. Three have won in the last decade; the last was Mohaymen in 2015.

Two pacesetters won, and the most successful running style is pressing the pace within two lengths of the lead. All Remsen winners had two or more previous starts.

The lone speed could be Fromanothamutha, although Midnight Chrome and Mr Jefferson have won as pacesetters. Judge Davis might show early interest with the addition of blinkers.

It is tough to choose between Mo Donegal and Zandon. Both are capable of moving up in their first start against winners. Mo Donegal gets the nod, as he has two starts under his girth, and Zandon, with only one start, returns from a 56-day layoff, so he might get a little leg weary in the stretch.