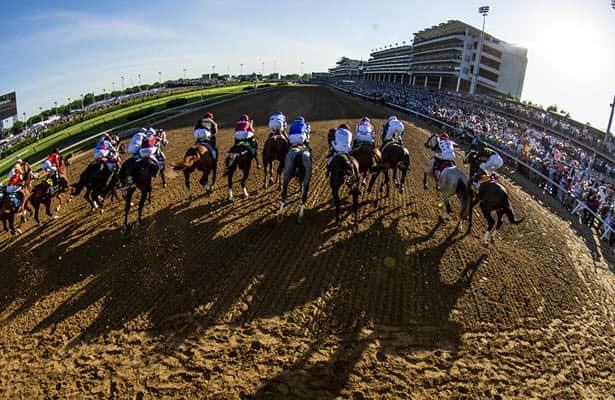 The $300,000 Pocahontas Stakes (G3) for 2-year-old fillies is one of three stakes on Churchill Downs opening weekend fall meet. After being run at a one-turn mile last year, the race reverts to its previous 1 1/16-miles distance this year.

The race is a "win and you're in" for the Breeders' Cup Juvenile Fillies. It is also the first prep race for the 2022 Kentucky Oaks, offering points on a 10-4-2-1 scale to the top four finishers.

The inaugural Pocahontas was held in 1976. Although none of the winners over the last decade have won the Breeders' Cup Juvenile Fillies, three of four Pocahontas winners returned to win or place in the Kentucky Oaks.

Carded as race 8 of 11, the Pocahontas attracted a field of eleven fillies. Post time is 9:39 PM EDT. The track should be fast.

Code for Success chased a quick early pace in her Ellis Park debut and powered down the lane to win by a length, completing six furlongs in 1:11. Despite the average final time, it was a weak race; the second and third-place finishers were off the board in their next start. Additionally, none of Vicki Oliver's last-out maiden winners have finished on the board in stakes in their next start. Toss.

Once Goddess of Fire got straightened out in the stretch, she made up ground to graduate at first asking by a neck at Saratoga. The race wasn't visually impressive; most runners were clearly tired in the stretch. However, the Todd Pletcher trainee's speed figures were an even 87 early and 88 late, meaning she maintained a steady speed. Pletcher seeks his first Pocahontas victory. Toss.

Mama Rina is the only filly with a race under her girth at 1 1/16 miles, although it was on the lawn. She battled gamely down the stretch and gained the victory by a nose in an exciting photo finish. Gormley's daughter could transfer her form to the dirt because others in her family are successful over all surfaces, and her half-sister Spirituality was third in the Matron (G3). Trainer Ken McPeek gets 16 percent winning juvenile making the turf to dirt switch. Long shot look.

Ontheonesandtwos returns to Churchill, where she has hit the board in both starts, including the Debutante Stakes. In her last start, the Norm Casse trainee bobbled slightly at the start of the Adirondack (G2) and could do no better than sixth. Although her speed figures have declined in each start, Jimmy Creed's daughter has worked strongly in the mornings. Win contender.

In her debut, Majestic d'Oro outclassed a herd of maidens by 5 3/4 lengths at Indiana. Sure, there weren't any world-beaters in the group, but the Brendan Walsh trainee ate dirt early, breezed past the pacesetter, and opened up under a hand ride, earning a strong 90 late-pace speed figure. Exotics.

Maxine Machine, a daughter of Pioneerof the Nile out of Grade 1-winning sprinter Encore, is a full sister to stakes placed turf miler Man Friday. The filly graduated by 1 1/2 lengths at first, asking as a turf miler at Ellis Park. This Brad Cox trainee has high knee action, and while she may carry her form to dirt, her speed figures are among the lowest in the field. Her work tap at Ellis is average. Have to respect the Cox/ Geroux team, though. Exotics.

Kneesnhips graduated on a firm Ellis Park turf course and then shipped to Saratoga to face winners in the Bolton Landing Stakes on yielding turf. The Tom Amoss trainee was off slow and raced wide the entire way, yet made a late run to earn third place. By first-crop sire Connect, Kneesnhips' half-siblings are capable over all surfaces, so she could be capable on dirt. She has a shot of hitting the board; her speed figure improved, and she's making the second start off a layoff. Additionally, Amoss has a 17 percent win rate with 2-year-old shippers switching to dirt. Exotics.

The most experienced filly in the field with four starts, Miss Chamita got the job done against lesser foes in Indiana. She earned a 72 Brisnet speed figure despite winning by 6 3/4 lengths and appears up against it here. Toss.

By Connect out of a daughter of Awesome Again, Hidden Connection is bred to love two turns, yet she had the speed to graduate at first asking sprinting at Colonial Downs, winning by 7 1/2 lengths. The Bret Calhoun trainee earned an 88 late-pace figure, the co-highest in the field. Calhoun's last-out maiden winners win 13 percent of their next starts. Exotics.

Lemieux is one of two confirmed pacesetters in the Pocahontas field. The pretty gray daughter of Nyquist won her third start, bumping up to seven furlongs, but she faced only two rivals in an off the turf maiden event and had things her way.  Previously, she was beaten a head by Miss Interpret, who won the P.G. Johnson Stakes in her next outing. Mark Casse's charges win 21 percent in their third start off the layoff. Win contender.

Joyrunner is undefeated in two starts against lesser company. She's shown tactical speed, winning initially from off the pace, and in her last start against winners, she pressed the early pace before drawing off by 8 1/4 lengths. The daughter of Gun Runner is out of the multiple stakes-winning turf mare Joy, who was successful at nine furlongs. The Laura Wohler's trainee shares the co-highest late pace figure with Hidden Connection. Live longshot.

In the last decade, one Pocahontas favorite won, and three finished in the money.

Pacesetters and closers combined to win six of the last ten times.

Lemieux is lone speed, and that can be dangerous, especially when ridden by a hot jock. On Churchill's opening day, Tyler Gaffalione had seven mounts. Tow won, and two hit the board.