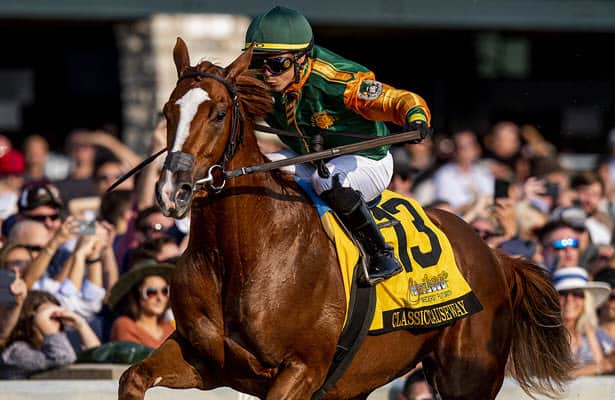 The second "Stars of Tomorrow" card at Churchill Downs showcases a dozen races for 2-year-olds, featuring the Kentucky Jockey Club (G2), which offers a scale of 10-4-2-1 qualifying points towards the 2022 Kentucky Derby.

Kentucky Jockey Club winners have not fared particularly well on the long journey to the first Saturday in May. Last year's winner, Keepmeinmind, finished a not-so-bad seventh in the Derby. Tiz the Law placed third in the 2019 Kentucky Jockey Club and returned the following year to capture Florida Derby (G1), Belmont (G1), and Travers (G1) before having a four-race win streak snapped with a second-place finish in the Kentucky Derby (G1).

Super Saver was the last colt to pull off the Kentucky Jockey Club/Kentucky Derby double in 2009-2010.

No. 6 Tiz the Bomb (3-1) switches back to dirt after a fast-closing run in the Breeders' Cup Juvenile Turf to earn second place in the shadow of the wire. He was spectacular in his second dirt start, dominating maidens at Ellis park by an eye-catching 14 lengths over a fast track. The Ken McPeek trainee followed up with two victories on the lawn, including the Bourbon Stakes (G2). Class plus talent equals a win contender.

Pedigree: Tiz the Bomb (Hit It a Bomb - Tiz the Key, by Tiznow) followed in his sire's hoof prints but fell a little short in the Juvenile Turf. Hit It a Bomb captured all three starts, including the 2015 Breeders' Cup Juvenile Turf (G1).

The appropriately named No. 5 Howling Time (7-2) stepped up in his second start to win the 1 1/16-miles Street Sense Stakes easily beating Kentucky Jockey Club rivals Red Knobs and Guntown. The Dale Romans trainee relaxed behind a moderate pace on the outside until the far turn, when Joe Talamo let him loose. Howling Time opened up by 3 1/4 lengths. Howling Time recorded a sharp pre-race five-furlong move in 1:00, and he is a strong Win contender.

Pedigree. Howling Time (Not This Time - Werewolf, by Arch) has classic conformation and breeding. His sire Not This Time, the exciting 8 3/4-length winner of the Iroquois Stakes (G3), finished second by a neck as the favorite in the 2016 Breeders' Cup Juvenile. Unfortunately, he was injured and retired to stud and is the current leading second-crop sire by earnings. Howling Time's distaff line class skips to the third generation and includes the precocious Desert Party, winner of the Sanford (G2), and the UAE Two Thousand Guineas (G3).

In his first try around two turns in the Breeders' Futurity (G1), No. 1 Classic Causeway (7-2) broke sharply from the far outside post and was used early to clear the field. Unfortunately, the move cost the Brian Lynch trainee, as he could not hold off the brilliant move of Rattle N Roll  and Double Thunder.

Classic Causeway got a bit tired and finished third, a 4 3/4 lengths behind Rattle N Roll and a half-length behind runner-up Double Thunder.  Classic Causeway recorded two strong pre-race breezes at Churchill, including a five-furlong move timed in 59.4, and draws the rail. Speed on the rail can be dangerous, but he'll have to hold off Tiz the Bomb and Howling Time. Exotics.

The multi-talented No. 7 Vivar (12-1) brings a two-race win streak into the Kentucky Jockey Club, one on yielding turf and the other over fast dirt. In his first start against winners, Vivar spent much of his time playing in traffic, hard-held on the inside, and then between horses. But, once Joel Rosario got running room, Vivar responded, passing horses and holding off a challenge. Now the Brad Cox trainee has to pass the class test. Live longshot.

Pedigree: Vivar (Cairo Prince - Debit, by Tapit) has a miler/middle distance pedigree. Cairo Prince gets the occasional stakes winner at nine furlongs, mainly on the lawn; however, overall, his offspring are best up to 1 1/16 miles on all surfaces. Vivar is the first blacktype earner in his immediate family.

No. 9 Red Knobs  (15-1) is a one-paced closer who passes tired horses. He made up ground in the Iroquois and Street Sense Stakes but was no threat to either winner. He has a lumbering gait with high knee action. The Dale Roman's trainee may occasionally win if closing into a fast pace but is more likely to fill out the superfecta. Lower exotics.

Her half-sister Surya is a multiple graded winning turf miler, and that one bore Aruna, winner of the Spinster (G1) over the Keeneland Lawn, along with three other stakes up to 1 3/16 miles. Aruna's full sister Hoop of Colour is a Grade 2 turf winner, and this family also includes Her World, who beat the boys in this year's Tyro Stakes, sprinting on the lawn.

After a trio of third-place finishes in Ireland, No. 13 Mannix  (20-1) entered the care of Mark Casse, switched to Gulfstream's new Tapeta course, and promptly recorded a 3 1/4 length victory over maidens. Mannix settled into a good rhythm in mid-pack of a 13-horse field before circling five-wide around the turn and clearing the field under a hand ride.

In two breezes over the Palm Meadows dirt, Mannix was urged to record a bullet four furlongs in 47.2 and five furlongs in 1:00.25. He handled the dirt well in both works and ate a little dirt in his first breeze. Live longshot.

Pedigree: Mannix (IRE) (Australia (GB) - Many Hearts, by Distorted Humor) has excellent leg and body extension, showing none of the choppy, high knee action often seen in turfy types. His sire Australia, a son of Galileo out of two-time Eclipse Award-winning turf mare Ouija Board, captured the Epsom and Irish Derbies, plus the prestigious Juddmonte International Stakes (G1).

No. 10 White Abarrio  (8-1) also ships in after beating optional claimers at Gulfstream. He's won both starts by a combined 10 3/4 starts, and while none of his competitors have returned to win, five have finished second or third.

White Abarrio was professional in his debut, racing bottled up early. He showed no hesitation to merge through a narrow opening, splitting horses and taking the lead. He kept a straight path down the lane in both starts.

Saffie Joseph, Jr. gave the pretty gray colt two sharp works at Gulfstream, a four-furlong move in 47.47 and a pre-race bullet five-furlongs in 59.11, in which he paired with the older Grade 3-placed filly, Allworthy. White Abarrio settled a couple of lengths off his rival and passed her slightly in the stretch while not being asked. The filly came back at him, but she was under aggressive urging. Live longshot.

No. 14 Call Me Midnight  (15-1) finally got his picture taken in his fifth start just 14 days ago. The lightbulb went on in his second-to-last start when he closed to finish second behind eventual Breeders' Cup Juvenile third-place finisher Giant Game. That was a key race; Out of a field of ten, two other rivals returned to win, and three hit the board in their next outing.

Fast-forwarding to Call Me Midnight's last race, James Graham reserved the colt near the back of the pack early. They moved between horses around the far turn and opened up by 3 1/4 lengths over a struggling field that was going nowhere fast. Call Me Midnight could be improving at the right time. Live longshot.

Pedigree: Call Me Midnight (Midnight Lute - Overseen, by First Defence) has a strong turf pedigree, although half-sister Bayerly Seen, a stakes-placed turf sprinter, won her debut in an off the turf event. Their second dam Jibe is Group 1 placed in England, and Call Me Midnight's third and fourth dams, Slightly Dangerous and Where you Lead, are Rene-de-Course (Blue Hens).

After getting a brief freshening from a summer of racing at Ellis, No. 4 Texas Red Hot  (12-1) returned to beat optional claimers at Churchill. After chasing a quick pace, he made a sustained drive to pass tired horses, finishing first by 1 3/4 lengths, under aggressive handling by Joe Talamo, although the victory wasn't visually impressive. Previously, the Randy Morse trainee won his maiden at Ellis Park over Guntown. Talamo sticks with Howling Time, and Julien Leparoux rides Texas Red Hot for the first time. Toss.

No. 2 Guntown  (15-1) made headlines as another well-bred exciting son of Gun Runner when he won his second start by 4 1/2 lengths. However, the sparkle is off after two poor finishes in the Iroquois and Street Sense Stakes. Steve Asmussen switched Guntown's running style from pace presser to closer in those races. Either that or Guntown just wasn't fast enough to keep up.

The blinkers go on, and Tyler Gaffalione, who was aboard in the Iroquois, returns to the saddle. Perhaps the blinkers will give Guntown more speed. I'll take a wait-and-see approach. Toss.

Last out maiden winners Smile Happy and Ben Diesel will try to win the Kentucky Jockey Club in their second start against more experienced foes.

No. 8 Smile Happy  (12-1) was professional in his 1 1/16 mile debut at Keeneland, relaxing in mid-pack early and getting a taste of dirt. Then he shifted into high gear around the far turn, zipping between horses and taking aim on the leaders. The Ken McPeek trainee whipped three-wide around the turn and opened up to win by 5 1/2 lengths. Talented, but would like to see him with another start before taking on this salty group. Toss.

Smile Happy's distaff line is all stamina, starting with his Champion damsire, continuing with the second damsire Relaunch, a graded winner at nine furlongs, and finishing up with the third damsire, Classic/Stout Chef-de-Race Graustark.  Smile Happy has little black type in the first three generations of his distaff line, however, his fourth dam is also the fourth dam of Kentucky Derby winner Funny Cide.

In his 1 1/16 mile Churchill debut, No. 12 Ben Diesel (15-1) showed decent early speed, tracking the pace from the outside in third. He denied a challenge from Bourbon Heist to win by 3 1/4 lengths. Like Smile Happy, Ben Diesel could be any kind, but I'm not convinced the Dallas Stewart trainee can beat this group in his second start. Keep an eye on him when he hits the Fairgrounds next year. Toss.

Ben Diesel (Will Take Charge - Girls Secret, by Giant's Causeway) has the pedigree and conformation of a middle distance/classic contender. His full sister Will's Secret is a Grade 3 winner who finished third in this year's Kentucky Oaks (G1). Their second dam Well Monied is a Grade 2-turf winner at nine furlongs and Grade 1-placed at ten furlongs.

A pair of former claimers, Rich Strike and Ready Pursuit look up against it. No. 3 Rich Strike (50-1) looked the better of the pair, making a mild bid in the stretch and passing horses while racing greenly. He finished third by 3 1/2 lengths.

Only three Kentucky Jockey Club victors in the last decade won their previous start, and the last four winners finished third in their last start, two of them in the Breeders' Cup Juvenile. All the winners had at least two prior races. The favorite hit the board 80 percent of the time, winning 40 percent.

Only one pacesetter has won in the last decade, while mid-pack and closers have done well in four of the last five editions.

Classic Causeway looks like lone speed, although White Abarrio could keep him honest. Howling Time, Tiz the Bomb, Vivar, and Ben Diesel have tactical speed and probably won't be too far back. I'm giving the nod to Tiz the Bomb with his class and experience.