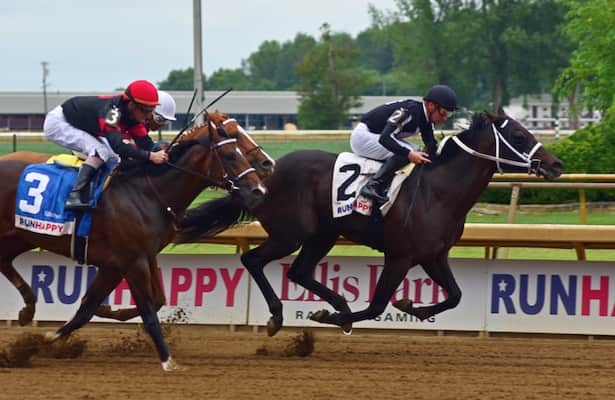 The $300,000 Iroquois Stakes (G3) for 2-year-old colts kicks off Churchill Down’s fall meet. The one-mile event holds two designations; it is a challenge event for the Breeders’ Cup Juvenile. It is also the first prep race for the 2022 Kentucky Derby, offering points on a 10-4-2-1 scale to the top four finishers.

The Iroquois was created in 1982. None of the winners have returned to win the Kentucky Derby, and most find their niche later in their careers as sprinter/milers. However, that’s not to say the In the Iroquois doesn’t have merit. In the last decade, two Iroquois runner-ups, Midnight Bourbon (2020) and Looking at Lee (2016) and fourth-place finisher Ride on Curlin (2013), all hit the board in a Triple Crown event. Looking at Lee was second in the Kentucky Derby, Midnight Bourbon and Ride on Curlin were second in the Preakness.

One Iroquois winner from the last six who ran in the Breeders’ Cup Juvenile hit the board. Not This Time (2016) missed the Juvenile victory by a neck, and unfortunately, was injured and retired.

Carded as race 9 of 11, Iroquois attracted a field of nine colts. Post time is 10:11 PM ET. The track should be fast.

Let’s review the field and those most likely to hit the board.

Tough to Tame has won two of three starts. He beat winners in his third start at Indiana Grand by 3 3/4 lengths. Although Speightster’s son can close from off the pace, the Chris Davis trainee’s speed figures are low, and he fits into the “what did he beat?” category. Toss.

Lucky Boss gave it his all but just couldn’t get by Roger McQueen in the Ellis Park Juvenile Stakes. In his second-to-last workout, he breezed four furlongs in a second-best 47.8 seconds at Keeneland. Street Boss’ son’s speed figures are lower than others in here, and he’ll have to show significant improvement to stand in the winner’s circle. Toss.

Roger McQueen is the only stakes winner in the field and has experience at Churchill. In his Churchill debut, he was third, beaten two lengths for second by eventual Hopeful Stakes (G1) winner Gunite. After graduating in his second start, the Larry Rivelli trainee showed tenacity while winning the Ellis Park Juvenile. Roger McQueen dueled on the early lead, took over while racing between horses and turned back a challenge from Lucky Boss to win by a half-length. Although this son of Uncaptured’s speed figures are on the low side, Rivelli has won the Iroquois twice with horses exiting a previous stakes. Exotics.

Strike Hard raced wide the entire way, traveling a mile in his second start at Gulfstream Park. He was a little green down the stretch, not switching leads and drifting, but prevailed by 2 1/4 lengths. Flashback’s son owns the highest late pace speed figure of 101; he showed improvement from his first to second start and has second-to-last bullet work, all positive signs; additionally, trainer Matt Williams has hit the board with two of six out-of-state shippers. Exotics.

In his second start in an off the turf maiden event, Magnolia Midnight handled the dirt just fine winning at Colonial Downs. The dark brown, almost black son of Midnight Storm was never touched and galloped home 7 1/4 lengths in front. While the victory was impressive, the Dallas Stewart trainee is taking a massive jump in class. Toss.

In his debut at Saratoga, Stellar Tap hooked up in an early speed duel, and after putting away his rival, the pretty gray colt opened up to win by 5 1/4 lengths. The victory made Steve Asmussen North America’s all-time leading trainer. Stellar Tap is coming out of a key race; two rivals won, and another finished third in their next start. In his second-to-last work, Stellar Tap had a five-furlong tune-up in 1:00.4. Here’s a helpful stat: In the last five years at Churchill, Tapit’s 2-year-olds have won twice in 23 starts, with four hitting the board.

Red Knobs graduated at a mile in his second start. He closed steadily from the back of the pack to put away a group of maidens at Ellis Park by 6 1/4 lengths. Union Rags’ son has a smooth, ground-eating gait, and his pedigree and conformation suggest that he’ll enjoy longer distances. Red Knobs’ speed figures aren’t as eye-catching as some of his Iroquois rivals, but trainer Dale Romans has won four of the last eight editions of this race and is looking for a fifth. Exotics.

Major General won his debut at Saratoga on talent. He put away early, mid-race and late challenges, and he outlasted all rivals in the end. The son of Constitution was very green, weaving down the stretch in response to the crop, and almost impeding another horse. He was clearly tired, and at one point, his third challenger, Bourbon Heist, put a neck in front. Racing on the inside of that rival, Major General refused to give up and surged back to win by a neck. The Todd Pletcher trainee tuned up with a 1:00.6 five-furlong breeze over the Saratoga training track. Todd Pletcher is seeking his first Iroquois victory. Talented, but he needs to grow up. (The horse, not Pletcher.) Toss.

Stretching out to a mile in his second start at Ellis Park, Guntown tracked a sensible pace, then opened up in the stretch by 4 1/2 lengths when asked. The son of leading freshman sire Gun Runner earned the Iroquois field’s second-highest late pace speed figure of 99, and the colt should improve with extra distance. Steve Asmussen drilled Guntown five furlongs in 1:00 in his second-to-last work for the Iroquois. Guntown’s half-sister, champion 3-year-old filly Untappable, won the 2013 Pocahontas. Win contender.

Husband Material had a paid workout in his second start, beating two rivals by 20 1/2 lengths over a wet-fast Delaware track. Husband Material crawled around the track, getting the mile in a poky 1:40.29. Despite the slow fractions, the James Toner trainee recorded a respectable 98 late-pace figure. The son of American Pharoah has plenty of class in his family. He’s a half-brother to stakes winner Uncle Lino. His unraced dam is a full sister to Alabama Stakes (G1) winner Lady Joanne and a half-sister to Preakness hero and sire Shackleford. Long-shot exotics.

Bourbon Heist is hoping his fourth start will provide the elusive victory. The Ian Wilkes trainee was beaten a head in his third start and by a neck in his last, showing an unwillingness to pass – or perhaps his rivals didn’t want to lose? On a positive note, Practical Joke’s son’s speed figures have improved in each start.  Exotics.

In the last decade, two favorites have won the Iroquois and four finished in the money. One-run closers have won seven times, while pressers within two lengths of the lead have won the rest.