Pedigree Stars: Eda is a vulnerable favorite in the G1 Starlet 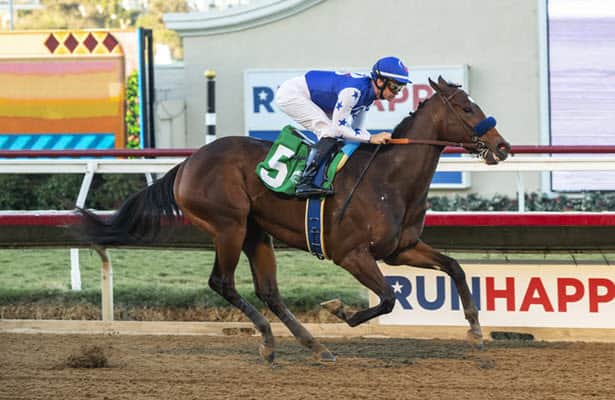 Bob Baffert is in an excellent position to earn his fifth straight victory in the Starlet since his charges account for half of the six-horse field.

The most accomplished filly in the short field is two-time stakes winner Eda. Munnings' daughter will navigate two turns for the first time after two easy sprint victories in the Anoakia and Desi Arnaz Stakes. Her only off-the-board finish was in the seven-furlong Del Mar Debutante (G1), where she faded to last after dueling on the lead. Win contender.

Tonito's was no match for the more experienced Eda in the Desi Arnaz Stakes. Yet Tonito's did not do too badly in her first start against winners and initial try on the dirt. The Doug O'Neil trainee placed a clear second, and as a daughter of Blame out of a Street Cry mare, Tonito's should appreciate the extra distance of the Starlet.  Win contender.

Which Grace Adler will show up in the Starlet?  After her sensational 11-length triumph in the Del Mar Debutante (G1), she fell apart like a soggy taco in the Chandelier (G2), beaten 13 lengths. The Baffert trainee was pushed to complete five furlongs in 1:01.60 in her second to last breeze while teamed with stakes-winner Enbarr. Exotics.

Desert Dawn has two starts at 1 1/16 miles under her girth, a distant third-place finish in the Chandelier Stakes, and an even more distant sixth-place finish in the Breeders' Cup Juvenile Fillies. The Phil D'Amato trainee meets a much weaker field in the Starlet, and Mike Smith picks up the mount. D'Amato and Smith teamed up to win the 2015 Starlet with Street Fancy after that one placed third in the Desi Arnaz Stakes. Live longshot.

Cairo Memories experiments with dirt after a tough trip in the Breeders' Cup Juvenile Fillies Turf (G1). Previously she was undefeated, including an easy 2 1/4 length victory in the Surfer Girl. However, this Bob Hess, Jr. trainee has a high-choppy knee action and looks more comfortable in her morning works on turf. As a side interest, her full sister Memories Prevail is the dam of Remsen Stakes entrant Zandon. Exotics.

Benedict Canyon returned off a short layoff to finish a distant third to Eda in the Anoakia stakes, beaten 9 1/2 lengths. The second-place finisher was 7 1/4 lengths in front of Benedict Canyon, so class could be an issue. Benedict Canyon drilled five furlongs in 1:00.40 from the gate with debut winner Newgrange, but she was pushed and given a few taps of the whip to keep up with the colt despite being on the rail. Toss.

Picking a Baffert filly is boring unless you like the 12-1 longshot Benedict Canyon. Eda looks like a vulnerable favorite at 2-1, and I'm not convinced that Grace Adler is all she's touted to be, despite Flavien Prat seemingly choosing her over Eda.

Tonito's was no match for Eda sprinting, but now she's stretching to two turns in her third start and can turn the tables. Plus, the price is right at 8-1.