Pedigree Stars: California Angel is on Oaks trail in Untapable 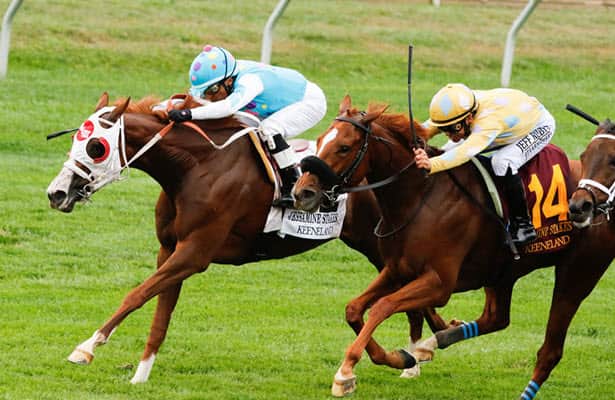 The new Oaks qualifier offers a scale of 10-4-2-1 points to the top four finishers, and the event at one mile and 70 yards is named in honor of the 2014 champion 3 -year-old filly and Fair Grounds Oaks heroine Untapable.

The Untapable Stakes is carded as race 10 of 13, and eight promising youngsters will line up in the starting gate.

Grade 2 winner California Angel switches back to dirt after an 11th-place finish in the Breeders' Cup Juvenile Fillies Turf (G1). She was off last in her initial dirt start after tossing her head at the start and was on the wrong lead down the stretch, but the George Leonard trainee ran all out every step of the way and got up for third. Then, California Angel returned to win the Jessamine Stakes (G2) on the lawn. She has a beautiful stride, and getting a face full of dirt didn't bother her. Win contender.

The 3-1 favorite Cocktail Moments won her seven-furlong debut by a heady 9 1/4 lengths. The Ken McPeek trainee was 8 1/2 lengths behind at the quarter-pole and then poured on the speed down the lane under Corey Lanerie. The daughter of Uncle Mo is the first foal out of 2016 champion sprinter in Canada River, Maid but has the pedigree, conformation and running style to handle longer distances. The quality of Cocktail Moments rivals is unknown; so far, three of the 11 returned, and none hit the board. McPeek gave Cocktail Moments a pre-race, four-furlong bullet work at Keeneland and tabbed Brian Hernandez Jr. to ride. Win contender.

The undefeated North County steps up after beating allowance foes at Keeneland. Brendan Walsh's filly took over in the stretch of the 1 1/16 mile event to won by two lengths over a sloppy track while on her left lead. The race yielded a next-out winner and runner-up from three starters. North County's speed ratings fit with this group. Exotics.

Fannie and Freddie boasts a victory at 1 1/16 miles at Fair Grounds. Although she beat only three rivals, the Al Stall Jr. trainee did it in style, winning by 3 3/4 lengths, and she returned to post a four-furlong bullet. Fannie and Freddie was eager and tightly held on the rail behind the pacesetter through slow fractions. Finally, Colby Hernandez shifted her outside around the turn, and Malibu Moon's daughter opened up on her own. Fannie and Freddie's Brisnet speed ratings are lower than others here, but the Malibu Moon filly is one of the few with early speed. Exotics.

Alittleloveandluck showed steady progression before winning her fourth start when dropped into state-bred maidens over Gulfstream's Tapeta surface. The pretty gray daughter of Arrogate has competed at a different track in each of her four starts and gets her third jockey switch. Alittleloveandluck has a later-maturing pedigree and is a half-sister to Canadian Grade 1 winner Victory to Victory, so the class could be there. Exotics.

Shotgun Hottie needed three starts and a stretch out to 1 1/16 miles against state-bred maidens to find the winner's circle. Gun Runner's daughter should improve with maturity and distance, and she fired a pre-race four-furlong bullet at Fair Grounds. But the Tom Amoss trainee's speed ratings are lower than her rivals, and Shotgun Hottie must prove she can handle the step up. Toss.

After finishing third in a blanket finish behind Feeling Happy and Hot Gun Hottie, Implosion returned to beat state-bred maidens at a mile but could do no better than a distant fourth against open company in her most recent start. Feeling Happy beat her out for third place by 1 1/2 lengths. Steve Margolis cross-entered Implosion in Monday's Letellier Memorial at six furlongs. Toss.

Feeling Happy won her debut over Shotgun Hottie and Implosion but has been outclassed in open company by 14 3/4 lengths, despite hitting the board. Her speed ratings are going the wrong way, and the only feeling I have about her chances here is doubt. Toss.

The Untapable Stakes has little early speed signed on. Implosion and Alittleloveandluck showed previous pacesetting style and could do so here. Fannie and Freddie could show life from the rail or sit just behind the pace.

Cocktail Moments might switch her style to be closer if the pace is slow, and North County should also get a stalking trip. California Angel had problems coming out of the gate in three of four starts, and the pace may not set up to her liking. So perhaps new jock Marcelino Pedroza Jr. can keep her steady.

I dislike picking the favorite on top; but Ken McPeek has a way with the fillies, and Cocktail Moments could follow in the hoofprints of Swiss Skydiver and Daddy's Lil Darling. McPeek also conditioned the incredible Take Charge Lady.