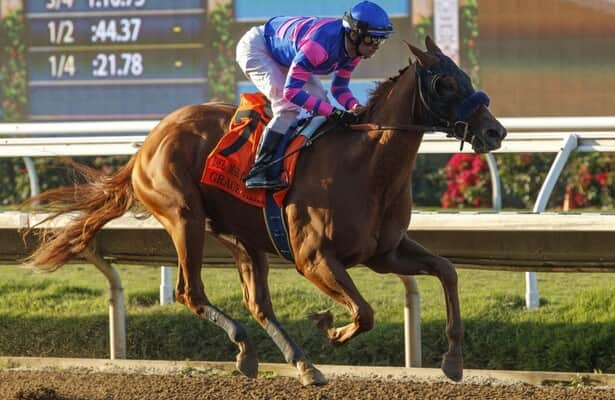 Baffert conditions this year's favorite No. 4 Grace Adler (9-5). Undefeated in two starts, she ran away from the Del Mar Debutante (G1) field by eleven lengths, and Curlin's daughter earned one of the highest Brisnet Speed Ratings of the month. Read more about her pedigree and prospects here.

No. 6 Elm Drive (8-1) regressed in the Debutante, fading to last, 36 lengths behind Grace Adler. Previously, the Philip D'Amato trainee prevailed after a long battle in the Sorrento (G2). None of the fillies that she beat in the Sorrento hit the board in their next outing, so was Mohaymen's daughter exposed in the Debutante, or can she bounce back?

Two debut winners, Electric Ride and Ain't Easy graduated by big margins, and we'll find out how good they are in the Chandelier.

No. 1. Electric Ride (3-1) galloped to an 8 1/2 length victory at Del Mar last month and was geared down at the end. Despite the race looking like a paid workout, the John Sadler trainee clocked six furlongs in 1:11.18, got her final furlong in 12.83, and owns the Chandelier's highest late-pace speed figure. Maybe this daughter of Daredevil will follow in the hoofprints of Swiss Skydiver and Shedaresthedevil.

2. Ain't Easy (5-2) made it look easy in her debut. She tucked in behind the early pace, split horses in the stretch, and galloped off by 5 1/2 lengths under a hand ride. One rival returned to win next out while another placed third, so this maiden event may turn into a key race. In her last two breezes, the Philip D'Amato trainee worked in company with Desert Dawn. Ain't Easy moved effortlessly over the track without being asked, while Desert Dawn wasn't as smooth and was pushed a little to keep up in one work.

3. Dance to the Music (5-1) was a clear second best in the Debutante behind Grace Adler and bested third-place finisher Bicameral by 2 3/4 lengths. It was a reasonable effort for the Mark Glatt trainee, and she's capable of hitting the board.

5. Desert Dawn (15-1) had zero early speed in her debut and was pushed through much of the five-furlong event. She finished third beaten 5 3/4 lengths by the more precocious Censorship. In her next start at a mile, Cupid's daughter was more forwardly placed. She eyeballed Censorship, then pulled clear to beat her rival by 4 1/4 lengths.  Desert Dawn's speed figures are mediocre, and she would benefit from an early speed duel.

7. Censorship (12-1) is still a maiden after three tries. By Tonalist out of a stakes-winning daughter of Curlin, Censorship should love the extra distance of the Chandelier; however, she may be slower maturing than her rivals.

The Chandelier Stakes history is similar to its American Pharoah Stakes counterpart. The favorite has hit the board in the last ten editions of the Chandelier, and five of them were, unsurprisingly, trained by Bob Baffert. Seven of the last ten Chandelier winners also captured the Del Mar Debutante. The pacesetter/presser style is favored, although a closer has won previously.

Now that we have the winner sorted out, who can fill in the lower positions? Electric Ride put in a tingling performance in her debut, and she finished with plenty in reserve. Dance to the Music and Ain't Easy look like the best of the rest.