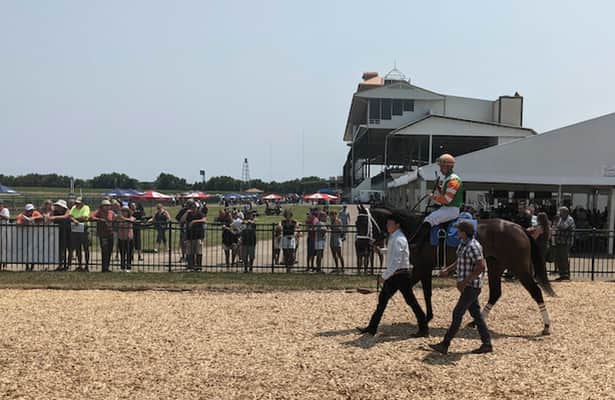 Two-year-olds will stretch out to two turns over the Ellis Park lawn this weekend. First-crop sires Bal a Bali and Mastery are represented, plus offspring from the families of Scat Daddy, Maximum Security, Laura’s Light and Higher Power will make their two-turn debuts.

Brad Cox might have another future turf star in the Godolphin homebred Already Charming (More Than Ready - Alluring Miss, by Shamardal). Cox has 24 percent winners and 49 percent in the money with 2-year-olds making their debut on the lawn.

Pedigree: Already Charming’s 3-year-old half-sister Candy Jar is 0-for-6 but placed in three turf sprints. Their dam Alluring Miss is a half to Scat Daddy, sire of Triple Crown Champ Justify, and many other high-class competitors. Alluring Miss is also a half-sister to 2014 Shuvee (G3) winner Antipathy and restricted winning sprinter Grand Daddy. Another half-sister bore stakes-winner and Grade 2-placed miler Classic Fit.

Bali Kuta (Bal a Bali (BRZ) - Paladin Bay, by Sligo Bay (IRE)) chased a slow pace in her first start over the Ellis Park Turf. She made a bid down the stretch but placed second, bested a neck by the winner, who had plenty left after setting soft fractions. The extra distance should suit the Jason Barkly trainee.

Pedigree: First-crop sire Bal a Bali, a son of Put it Back, has two winners, including Hoover Stakes winner Corner Office, from 16 starters. The Brazilian Triple Crown winner was successful from five to 12 furlongs over the lawn. Then, he transferred his form to Santa Anita, winning the Grade 1 Frank Kilroe and Shoemaker Mile plus the American Stakes (G3). His offspring show that they need a few starts and are best on turf at longer sprints to classic distances.

Pedigree: Bali Kuta’s dam Paladin Bay won three stakes, including the Selene (G3), over Woodbine’s Polytrack. The mare earned $607,316 in 18 starts and is the most accomplished runner in this family.

No embarrassment getting beat by @bradcoxracing with your $7,000 yearling purchase first time on the turf. Big kudos to @jbark131 @skurtz_05 @Gabesaezjockey for today's excitement, and the team @MasonSprings for finding her and putting a solid Aiken, SC foundation under her. pic.twitter.com/1AxzDq5S8F

Beckynkari (Mastery - Transportation, by Giant's Causeway) might be one to watch down the road. Mike Maker has 11 percent winners and 31 percent in the money with 2-year-olds making their debut on the lawn.

Pedigree: First-crop sire Mastery (Candy Ride) is represented by only three runners, but two are winners. All won in their second start, including Up Her Sleeve, who captured a turf sprint at Gulfstream.

Beckynkari’s dam Transportation is a half to 2019 Pacific Classic (G1) winner Higher Power and multiple graded winning handicap horse Alternation, who was capable on dirt and turf. Transportation’s half-sister Interrupted is a multiple stakes-winning miler. Beckynkari’s second dam Alternate is a multiple stakes winner, including back-to-back editions of the Robert B. Dick Memorial at 1 3/16 miles over the lawn.

Another one to watch is Surprising (American Pharoah - Harriett Lane, by Giant's Causeway) The Wayne Lukas filly has five top 10 breezes, including consecutive bullets at Ellis Park.

Lukas’ stats aren’t what they once were – he has only one winner from 92 debuting turf 2-year-olds, and 10 finished in the money. But that winner was recent. Mohaylady won a turf sprint at Ellis on July 3, and finished third on the 24th in an allowance race. Mohaylady’s works weren’t as speedy as Surprising’s.

Pedigree: No surprise that American Pharoah (Pioneerof the Nile) is continuing his male line as an excellent turf sire.  Surprising is a half to stakes-winning turf milers Street of Gold and Heiko, plus a half-sister produced multiple French Group placed French Pegasus. Surprising’s dam Harriett Lane is a stakes-winning turf sprinter and is Grade 3-placed.

Colts get their turn in Saturday’s fifth race.

Play Action Pass (Cairo Prince - Light of a Star, by Muqtarib) switches to the lawn after finishing fourth against Gunite (Gun Runner) in a dirt sprint. The Robert Medina trainee put in a good effort, holding position throughout. You might want to use Play Action Pass in an underneath position since Medina is 0-5 with the dirt to turf angle but has 20 percent in the money.

Pedigree: Play Action Pass is a half to Laura’s Light, a multiple graded turf winner from a mile to nine furlongs. She was victorious in three graded stakes last year and won this year’s Ouija Board Distaff by 4 1/2-lengths. Play Action Pass’ half-brother Barry Lee won the 2017 Arlington-Washington Futurity and placed in a pair of Grade 3 sprints.

Coming out of the same race as Play Action Pass, Rocket One (Into Mischief - London Mist, by Afleet Alex) had no excuse. He just ran around at the back of the pack and finished eighth. Bill Mott has 13 percent winners and 39 percent in the money with the dirt-to-turf angle.

Pedigree: This $600,000 Keeneland yearling is a half to Dancing Bell, who placed in the 2017 Sorrento Stakes (G2). Their dam London Mist is a half to two graded winners, the hardy handicap veteran Last Gunfighter who earned $1,219,205 in 21 starts, and Tiger Moth, who captured a pair of Grade 3s.

Mentioned previously, Gingrich (Mr Speaker - Lily of the Nile, by Pioneerof the Nile) should enjoy the stretch out in distance and be fit in his second start. Brian Lynch gave Gingrich a sharp pre-race 5-furlong gate work of 1:00.40, second-best of 18 for the day.