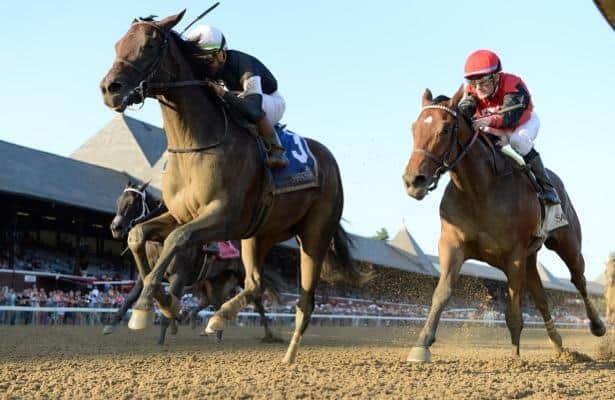 Six stakes races for the 2-year-old contingent were contested at Saratoga, Del Mar, and Gulfstream Park this weekend.

Out in California, Amalfi Sunrise and Bulletproof One are tearing up the track.

Amalfi Sunrise was clearly the best in the Sorrento Stakes (G2).

Bulletproof One dominated in all three starts by a combined 29 3/4-lengths.

Amalfi Sunrise could be favored for the Del Mar Debutante.

Will we see a match up between her and Bulletproof One?

Meanwhile, at Gulfstream Park, Chance It and Lenzi’s Lucky Lady took their respective first legs of the FTBOA Florida Sire series for 2-year-olds.

The Simon Callaghan trainee lined up in a group of five vying for the early lead.

She dueled between horses early, then cleared before the 5/16 pole and galloped home six lengths in front under a hand ride from Norberto Arroyo, Jr.

Pedigree: Amalfi Sunrise has the pedigree to handle sprints to middle distances.

The son of Tapit is off to a strong stud career.

As of this writing, he has 13 runners who have started 16 times.

Five have won, and eight have hit the board.

Their second dam is multiple stakes winning miler Bella Chiarra, who earned over $600,000 in 29 starts.

PERFECT ALIBI (Sky Mesa – No Use Denying, by Maria’s Mon) became a graded stakes winner Saturday by taking the Adirondack.

The Mark Casse trainee raced between horses while pressing the pace in the early stages.

Around the turn, Perfect Alibi faced a wall of horses.

Under jockey Irad Ortiz, Jr., Perfect Alibi launched through a seam and took the lead, holding off a late challenge by Frank’s Rockette, who was in tight on the rail.

She previously placed in the Astoria Stakes.

Their dam is a stakes winning miler who won and placed over dirt and turf.

FRANK’S ROCKETTE (Into Mischief – Rocket Twentyone, by Indian Charlie) fought gamely while in very tight down on the rail in the stretch.

Pedigree:  Frank’s Rockette has a sprinter/miler pedigree with a precocious pedigree.

The bay filly is a half-sister to stakes placed sprinter Firewater Rocket.

This is the family of two-time champion Indian Blessing.

The Peter Miller trainee dominated a field of seven other 2-year-old California-bred fillies by 6 1/4 lengths, getting 5 1/2 furlongs in 1:04.70, as the overwhelming favorite.

So far, Bulletproof One has lived up to her name.

She’s dominated in all three starts by a combined 29 3/4-lengths, including two restricted stakes.

Pedigree: Bulletproof One has a sprinter/miler pedigree.

Her half-brother I Came to the Party placed in two stakes, including the Federico Tesio.

Their dam was well-known on the California circuit and earned over $200,000 in 24 starts.

There’s little black-type in the rest of the distaff line.

BIG RETURNS (Mr. Big - Quick Chick, by Orientate) earned a win Friday in the Graduation Stakes thanks to disqualification.

The Luis Mendez trainee settled on the rail behind a trio of pace setters through a first quarter in 21.87.

Around the turn, Big Returns faced a wall of horses and didn’t get running room until late.

His second dam Kuanyan is a multiple stakes-placed sprinter.

SQUARE DEAL (Square Eddie - North Freeway, by Jump Start) raced at the back of the pack early.

He made up ground down the backstretch and flew five wide around the turn.

Square Deal was a length in front down the stretch, but a sixteenth from the wire he bore in slightly, impeding Pas de Panique who had to check off heels.

Square Deal was disqualified and placed third after drifting in.

He’s a half-brother to Take The One O One, a multiple stakes winner from seven furlongs to 1 1/8 miles over dirt and turf.

Their dam is a stakes-winning miler.

The Saffie Joseph, Jr. trainee pressed the pace setter from the inside over the sloppy track.

Chance It, the post time favorite, took over just past the 1/2-mile pole and drew clear, galloping home by 3 1/4-lengths while drifting.

Pedigree: Chance It has a sprinter/miler pedigree.

His dam is a half-sister to Aireofdistinction, a multiple stakes winning sprinter who earned over $300,000 in 22 starts.

There’s no other black-type in three generations of the distaff line.

LENZI’S LUCKY LADY (With Distinction - Blue Eyed Sweetie, by West Acre) on Saturday at Gulfstream Park remained undefeated as she took down her second stakes victory in the Desert Vixen Stakes the first leg of the FTBOA Florida Sire series for 2-year-old fillies.

The Kathleen O’Connell trainee took just off the early pace.

She took the lead by the five-sixteenths pole, and was much the best, winning by 4 1/2-lengths under hand urging.

Pedigree: Lenzi’s Lucky Lady has a miler’s pedigree, with plenty of precocious black-type throughout the distaff line.

Her dam placed second in the 2010 Desert Vixen Stakes and captured the Lindsay Frolic and Brave Raj Stakes the same year.

She also placed in the John Franks Juvenile Fillies Turf.

The second generation includes My Brown Eyed Guy, winner of two legs of the Florida Sire stakes: the 2013 Dr. Fager and Affirmed Stakes.

Brown Eyed Sue placed in the Lindsay Frolic, and Domenick’s Duene was third in a turf mile stakes for juveniles.

The second and third dams are stakes placed, and multiple stakes winning turf horse Tannersville is part of this family.