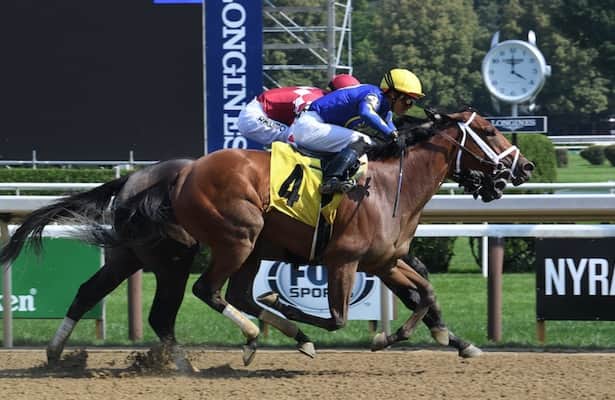 Is there anything like opening day at Keeneland's fall meet, with the vibrant colors of changing leaves, that crisp autumn smell and the excitement of full fields?

The Alcibiades is also an early 2022 Kentucky Oaks points race, with a scale of 10-4-2-1. Only Alcibiades winner Restless Rider (2017) has competed in the Oaks in the last decade, and she placed 12th.

Let's take a look at the field.

No. 2 Miss Interpret  (10-1) enters the Alcibiades off a two-race win streak, including a 1 1/2 length victory in the off-the-turf, seven-furlong P. G. Johnson Stakes. True, she only beat three other fillies, but there's a lot to like about this Todd Pletcher trainee as she hopes to follow in Simply Ravishing's (2020) hoofprints to pull off the P. G. Johnson/ Alcibiades double.

Miss Interpret was quick enough to take the lead from the outset if she had wanted it but settled behind the dueling pacesetters for Jose Ortiz before passing them in the stretch with little encouragement. The third-place finisher Sail By returned to win the Miss Grillo (G2).

By Street Sense, out of a daughter of Touch Gold, Miss Interpret is bred to run all day, and the two turns of the Alcibiades will suit her. Additionally, she owns the field's highest late-pace speed figure of 96. Win contender.

No. 1 Juju's Map (5-2) had a paid workout in her second start at Ellis Park, graduating in a mile event for maidens by 5 3/4 lengths while under wraps the entire way. Two rivals returned to hit the board next out. The Brad Cox trainee earned a 95 Brisnet Speed Rating, a 10-point jump from her debut.

By Liam's Map out of a half-sister to Grade 1 winner Fault (Santa Margarita Stakes, nine furlongs), Juju's Map should have no trouble with a little extra distance. FYI, Brad Cox's British Idiom won the Alcibiades in 2019 on her way to champion 2-year-old filly honors. Win contender.

In her debut at Saratoga, No. 8 Distinctlypossible (8-1) circled the field widest of all and meandered down the lane to grab second place in a six-furlong maiden event. The Chad Brown trainee drifted in response to Irad Ortiz, Jr.'s encouragement, but it was an excellent first effort against a strong group. The winner, Gerrymander, and third-place finisher A Mo Reay finished second and third, consecutively, in the Frizette Stakes (G1) in their next start. Two others from the maiden event returned to hit the board in their next outing.

By Curlin out of Funny Proposition, a Grade 2 winning daughter of Medaglia d'Oro, Distinctlypossible should love the extra distance and gets a jock switch to Tyler Gaffalione. Win contender.

Juju's Map's stablemate No. 7 Matareya (4-1) has the dangerous combo of a long-smooth stride and high cruising speed. Both were on display when she graduated at first, asking in a 6 1/2-furlong maiden event at Ellis Park. Pioneerof the Nile's daughter recorded interior splits of 22.09, 45.07, and 1:09.44, with a final time of 1:15.87 with little urging through the stretch. Six of her seven rivals returned, but only one hit the board in their next outing, so put her in the "visually impressive but who did she beat?" category.

Additionally, Matareya received an 81 Brisnet Speed Rating, one of the lowest in the Alcibiades field. Definitely the weaker of the two Brad Cox entries. Exotics.

No. 10 Penny Saver (4-1) has improved in each of her three starts, cumulating in a 9 1/2 length victory in her first two-turn attempt just two weeks ago at Churchill. Penny Saver paddles with her left fore and isn't the prettiest mover, but she got the job done under a hand ride the entire way from Brian Hernandez Jr.

By Super Saver, Penny Saver is a half-sister to 2020 Starlet Stakes (G1) third-place finisher Nasreddine. Their dam Appreciating was third in the Natalma (G2), so there's precocious class in her family. Trainer Ken McPeek won last year's Alcibiades with Simply Ravishing and in 2018 with Restless Rider. Exotics.

No 6 Mama Rina (12-1) had a ground-saving trip in the Pocahontas Stakes (G3) and was best of the rest against the runaway 9 1/4 length winner Hidden Connection. The Ken McPeek trainee slowly passed tired horses to her outside to grab second place by a neck. Mama Rina could pass tired horses to pick up a check if there is a hot early pace. Lower exotics.

No. 9 Pipeline Girl (20-1) switches back to dirt after tiring to third against optional claimers on the Kentucky Downs lawn. Tom Amoss was in the money 52 percent with the turf-to-dirt angle with juveniles in the last five years. Despite the stat, Air Force Blue's daughter has some of the lowest speed figures in the field and needs improvement to handle this group. Toss.

Patrick Biancone ships No. 11 Diamond Wow (8-1) from Gulfstream Park, where the daughter of Lookin at Lucky is undefeated in two starts. Her 1 3/4-length victory in the seven-furlong Our Dear Peggy Stakes wasn't as visually eye-catching as others in here, getting her final furlong in 13.25. However, on a positive note, she earned a 90 late-pace figure, and Mike Smith picks up the mount.

Diamond Wow might have the class to compete in the Alcibiades. Her dam Patriotic Dimond is a restricted stakes-winning half-sister to multiple graded winner Diamond Oops, who is by Lookin at Lucky. Diamond Oops is a graded stakes earner of $1,362,340 in 22 starts and was most recently second in the Turf Sprint Stakes (G3) at Kentucky Downs. Toss.

No. 12 Runup (12-1) dominated lesser types in her last two starts, including a three-length win in the one-mile Sorority Stakes at Monmouth. The Laura Wohlers trainee drifted a bit in the stretch but was hand-ridden the entire way in what amounted to a paid workout. Runhappy's daughter is another that fits in the "who did she beat" category. The second-place finisher finished eighth, whipped 26 1/4 lengths in the Frizette (G1); however, the Sorority Stakes fifth-place finisher won the Finest City Stakes at Presque Isle Downs next out. Runup has improving speed figures, but they are near the lower half of the field. Toss.

The Alcibiades favorite has hit the board at a 60 percent rate in the last decade, with a 30 percent win rate. Pace pressers and closers are favored over pacesetters.

There is a lot of early speed in the Alcibiades. Matareya, Pipeline Girl, Penny Saver, and Runup all won their last race as pacesetters. None of them appear to be need-the-lead types, but with lightly raced 2-year-olds, it's anyone's guess who will act up when asked to rate.

Todd Pletcher has a good shot of picking up his first Alcibiades trophy with Miss Interpret. She has four starts under her girth and will sit off the pace.

Juju's Map showed rating ability in her debut and owns the highest speed figures in the field.

Distinctlypossible faced a strong group in her debut and is another who should improve in her second start.