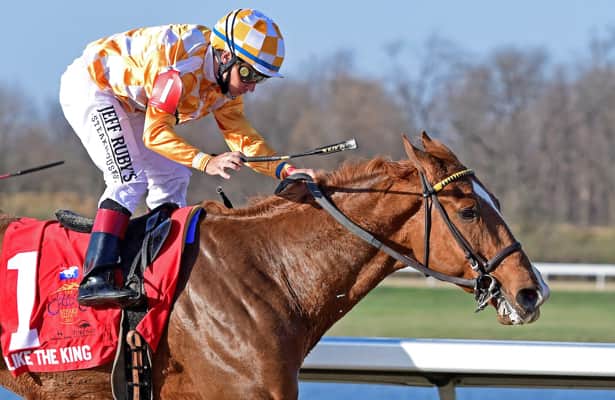 Like the King added his name to the list of 2021 Kentucky Derby hopefuls when he captured the Jeff Ruby Steaks (G3) over Turfway Park’s Polytrack surface.

The chestnut colt lingered near the back of the pack for six furlongs before switching to the far outside. He made a six-wide bid around the turn and gradually passed tiring horses to win by a length under a well-timed ride by Drayden Van Dyke. The Wesley Ward trainee traveled 1 1/8 miles in 1:50.22, getting his final furlong in 12:99.

Like the King earned 100 Kentucky Derby qualifying points and has a total of 104. Previously, he earned four points for finishing second in the John Battaglia Memorial.

Like the King was bred by Horseshoe Racing LLC. He sold for $28,000 at the 2018 Keeneland November sale as a weanling. The following year, he brought $170,000 at the OBS October Yearling auction. Like the King is campaigned by M Racing Group LLC.

The Jeff Ruby Steaks formerly was known as the Jim Beam Stakes and then the Spiral Stakes. Lil E. Tee (1992) and Animal Kingdom (2011) continued to win the Kentucky Derby, while Jeff Ruby alumni Summer Squall (1990) and Prairie Bayou (1993) were second in the Derby and captured the Preakness. Since the switch to Polytrack in 2006, many of Turfway’s Kentucky Derby prep winners went on to successful stakes careers over turf and Polytrack.

Pedigree: Like the King (Palace Malice - Like a Queen, by Corinthian) has the pedigree and conformation to handle middle to classic distances. He has slightly high knee action and tactical speed and has won on the lead and off the pace. Like the King has been successful over turf and Polytrack and has placed on dirt. He was second sprinting in his debut on dirt at Belterra Park and after pressing the pace, finished third in an Allowance race over Keeneland’s main track last year (Click here to see Like the King's pedigree chart.)

Palace Malice (Curlin - Palace Rumor, by Royal Anthem) flashed talent as a 2-year-old and early 3-year-old, earning graded status in the Risen Star (G1) and Bluegrass Stakes (G1). He matured in the middle of his 3-year-old season, winning the Belmont Stakes over Preakness winner Oxbow and Kentucky Derby hero Orb by 3 1/4 lengths. After winning the Jim Dandy (G2), Palace Malice went off form, although he was best of the rest behind Ron the Greek when facing older horses in the Jockey Club Gold Cup Invitational Stakes (G1).

Palace Malice came into his own as 4-year-old, reeling off four straight victories in the  Gulfstream Park Handicap (G2), New Orleans Handicap (G2), Westchester Stakes (G3),and Metropolitan Handicap (G1), where he bested Breeders’ Cup Dirt Mile winner Goldencents by a length. After an uncharacteristic sixth-place finish in the Whitney, Palace Malice was set to retire because of bone bruising. However, it was decided to let him heal and bring the game chestnut back for another year. After two sub-par performances as a 5-year-old, Palace Malice retired with a 19: 7-4-2 ($2,691,135) record.

Like the King hails from a modest distaff line. He is the first foal out of the stakes-placed turf miler Like a Queen (Corinthian - Arcanum, by Unbridled). The mare spent the bulk of her career competing over the Gulfstream lawn, from five furlongs to a mile. She placed second in the Our Dear Peggy Stakes as a juvenile and was a fixture in the allowance/optional claiming classes. Like a Queen retired as a 4-year-old with a 29: 2-6-3 ($125,125) record. Like the King has a 2-year-old half-brother Kiss Principal (Maclean’s Music) and a yearling half-brother by Fast Anna.

Like a Queen’s sister bore the stakes-winning sprinter Ournationonparade (Cal Nation), winner of the Maryland Million Nursery. He also placed in a pair of sprints, the Hutcheson and Carry Back Stakes.

Like the King’s third dam Twin Bet (Bet Twice) raced in France for two years before heading to Hollywood Park. The long-winded turf router captured the listed Waya Stakes at 1 1/2 miles over the lawn and placed in three other turf stakes at 1 3/8 miles. Her best foal was the listed turf miler, Rahy’s Chance (Rahy).

Corinthian, a well-bred son of Pulpit from an illustrious Claiborne female family, was known for his hot temper and antics before and during races. He refused to go to the post with a pony before the Aventura Stakes, reared up in the gate, and had to be scratched. He was disqualified from first to third in the Fountain of Youth (G2) for weaving around in the stretch. Despite his quirks, the brilliant Chestnut won the Gulfstream Park Handicap (G2) at 1 3/16 miles, he defeated Lawyer Ron in the Metropolitan Handicap (G1) and captured the initial running of the Breeders’ Cup Dirt Mile in 2007.

Despite his blue-blooded pedigree, Corinthian sired only a dozen stakes winners out of 454 starters. His best foal is Grade 2 winner Prince Lucky. As a damsire, Corinthian has 98 winners from 175 starters and four stakes winners.

Like the King has enough points to enter the Kentucky Derby starting gate. His form on dirt is questionable, and he might not be as good over the surface as he is on turf and Polytrack.