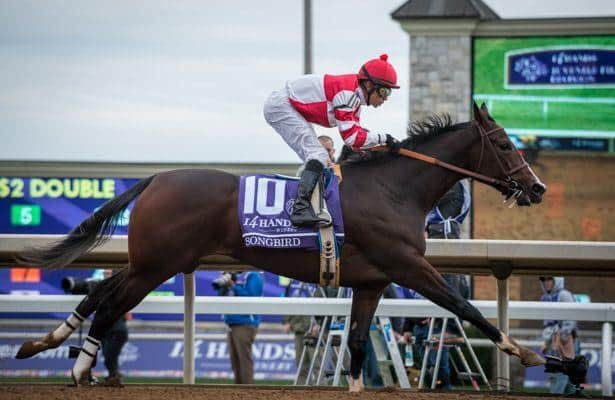 The Breeders’ Cup Juvenile Fillies has been contested for 31 years. During this time, racing fans have witnessed thrilling finishes and champions in the making.

Santa Anita has hosted six of the last sixteen Breeders’ Cup events. This year, the Breeders’ Cup will once again head to the Southern California track. The local fillies have the home advantage. The local horse won four of the last six times that the track hosted the year-end event and locals have finished in the top three spots seven times.

The favorite has succeeded in ten of the last sixteen editions of the Juvenile Fillies, so the event is considered to be a straightforward race to handicap. That is true, except when Santa Anita is the host.

Two favorites and a second favorite have captured three of six editions of the BC Juvenile Fillies at Santa Anita. Halfbridled (2003) and Stardom Bound (2008), were overwhelming favorites. In 2012, Beholder was considered the second favorite behind Executiveprivilege.

The highest payout in the history of the BC Juvenile Fillies occurred at Santa Anita. Just two years ago in 2014, trainer D. Wayne Lukas proved that he is still sneaky at pulling off the upset when Take Charge Brandi took advantage of a speed bias over a drying out track to score at 61-1. Backers of the well-bred filly were rewarded with $125.40 for a $2 win ticket. In 2013, again at Santa Anita, Ria Antonia paid $66.60 via disqualification of She’s a Tiger, a 5-1 shot.

Still, just because the favorite normally doesn’t win the Juvenile Fillies at Santa Anita isn’t a reason to cross her out completely. Since 2000, the beaten favorite has placed fourth or better in all but two instances, no matter which track hosts. The second and third favorites don’t fare so well. The second favorite has won once in the last sixteen years and placed fourth or better seven times. The third betting choice has never won but has crossed the wire in second or third six times.

Which Breeders’ Cup prep race produces the most Juvenile Filly winners? It’s a tie between the Frizette Stakes and the Chandelier Stakes, formerly known as the Oak Leaf Stakes. Four two-year-olds exited one of the two Grade 1 races and captured the Breeders Cup.

Two fillies prepped in the Darley Alcibiades Stakes. She Be Wild prepped over the Keeneland Polytrack before capturing the Juvenile Fillies over Pro-Ride at Santa Anita. It shouldn’t have been a surprise, but the youngster paid $10.60 to win. Take Charge Brandi went to the Breeders’ Cup via the Keeneland prep, this time on dirt. She is one of only two fillies who didn’t win or place second in their Breeders' Cup prep.

The rest of the Juvenile Fillies winners took various routes to the Breeders’ Cup, including the Arlington-Washington Lassie, Matron, Summer Stakes (Canada), and My Dear Girl (FL Stallion Stakes Series).  Beholder was second in the Del Mar Debutante (G1) but skipped the Chandelier Stakes, which was scheduled 28 days later. Trainer Richard Mandella sent Beholder out to dominate allowance runners a week after the Chandelier. The veteran trainer captured his second Juvenile Fillies trophy with his developing superstar.

It’s no secret that since Santa Anita switched back to a dirt surface, the track favors front runners and pace pressers, especially early in the day.

The last three years that Santa Anita hosted the Breeders’ Cup, the Juvenile Fillies winner wired the field – the only notable exception was when pace setter She’s a Tiger was DQ’ed in favor of Ria Antonia, who was seventh of ten in the early stages of the race. Previous editions hosted at Santa Anita were more favorable to fillies racing off of the pace.

D. Wayne Lukas has a way with the ladies. He has sent 44 starters into the Breeders’ Cup Fillies starting gate, more than twice the number of any other trainer. Eighteen of his charges have captured the top four spots, 6 of them winners.  Lukas has trained two winners of the Juvenile Fillies since 2000, the last was Take Charge Brandi, the longest shot in the field in 2014. Lukas may not have a filly entered this year.

Bob Baffert is a fixture on the Southern California racing circuit and always has a herd of classy two-year-olds in his barn. He has sent 20 juvenile fillies to the Breeders’ Cup. Only two have won, but four have placed second. This year, Baffert will be represented by Chandelier heroine, Noted and Quoted.

Surprisingly, the East Coast giant Todd Pletcher doesn’t have a Breeders’ Cup Juvenile Fillies trophy in his showcase. He’s sent a dozen fillies to the post. Four have come in second, and two each in third and fourth place. Last year, Pletcher conditioned Rachel’s Valentina to a second place finish behind the spectacular Songbird. This year, Pletcher’s charge, Spinaway winner Sweet Loretta will try to give the trainer his first Juvenile Fillies trophy.

Ken McPeek has also sent numerous fillies to the Breeders’ Cup without success. He has an 11-0-2-3 record in the race. The last two times that McPeek has been represented in the Juvenile Fillies, his charges have finished third; Rosalind (2013) and Dothraki Queen (2015). His main hope this year is Daddys Lil Darling, who was second in the Alcibiades Stakes.

Richard Mandella has won with three of five of his Juvenile Fillies, twice at Santa Anita. Mandella doesn’t have a charge entered in the race this year.

So here’s how to pick the Breeders’ Cup Juvenile Fillies winner:

Won/placed in their last start, preferably a stakes;

Competed at a mile or farther in their last start;

Logical longshot at 5-1 or greater odds.

Keep the favorite and second favorite in your exotic wagers. If the filly is locally based, she has a good chance of winning or hitting the board.

Now, armed with these facts and figures, picking the winner is easy, right?