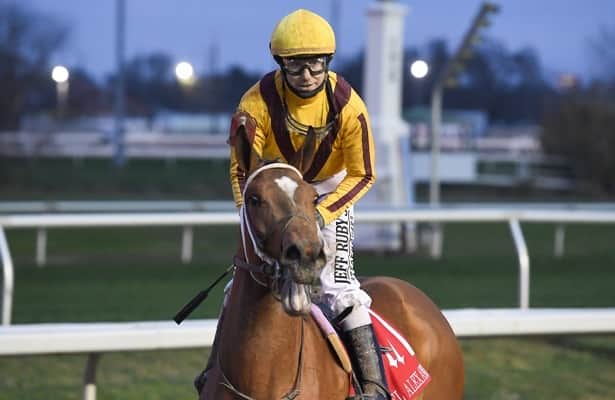 Curlin, Medaglia d’Oro, and Frosted have daughters on the 2021 Kentucky Oaks trail, while Bernardini is continuing his legacy as a broodmare sire.

Let’s take a closer look at the pedigrees of Grade 2 Rachel Alexandra winner Clairiere, and her nemesis Travel Column, who has an intriguing backstory. Santa Ynez (G2) heroine Moonlight d’Oro and Suncoast Stakes winner Curlin’s Catch are also ones to watch.

Clairiere looked beaten in the stretch of the Rachel Alexandra Stakes down on the rail and a length behind Travel Column. Once Joe Talamo switched the Steve Asmussen trainee to the outside, she switched gears and was up in time to beat her rival by a neck. It was 6 1/2 lengths back to third-place finisher Moon Swag. A Stonestreet Stables homebred, Clairiere has a 3: 2-1-0 record and $270,492 in earnings. She earned 50 Kentucky Oaks qualifying points and sits atop the leaderboard with a total of 54 points. She earned four points when finishing second to Travel Column in the Golden Rod Stakes (G2) last year.

Curlin is third by earnings on the North American general sire list. His offspring win at all distances and over all surfaces. His daughters Curlin’s Catch and Souper Sensational also are on the Oaks trial, while his son Overtook earned Derby points with a runner-up finish in the Withers Stakes (G3).

Clairiere is the first foal out of multiple Grade 1 winner Cavorting. She has a 2-year-old half-sister by Medaglia d’Oro and a full yearling brother. Cavorting was barren for 2021.

Cavorting competed against the best of her generation and twice beat 2017 champion older mare Forever Unbridled in the Personal Ensign (G1) and Ogden Phipps Stakes (G1). The mare earned $2,063,000 in 13 starts, and she was successful from six to nine furlongs.

Cavorting is the most accomplished earner from five winners in her immediate family. Her half-brother Moon Colony (Uncle Mo) won the 2019 Penn Mile (G2). Her hardy half-brother Thirstforlife (Stay Thirsty) is a veteran of 37 races and is a multiple graded stakes-placed sprinter/miler.

Clairiere’s second dam is Grade 2 winner Promenade Girl The mare was successful from a mile to nine furlongs.

Travel Column looked home free in the stretch of the Rachel Alexandra Stakes until she was challenged in the shadow of the wire by Clairiere. The Brad Cox trainee bested her less-experienced rival in the Golden Rod (G2) last year by a length. The pretty gray filly was bred by Mr. & Mrs. Bayne Welker Jr. and Denali Stud. She sold to OXO Equine for $850,000 from the Fasig-Tipton Select Yearling Sale. Travel Column has a 4: 2-1-1 record and $269,184 in earnings. She is in second place behind Clairiere on the Oaks leaderboard with 32 points.

Multiple Grade 1 winner Frosted is off to an excellent start at stud. Tapit’s son won from eight to nine furlongs. As a 3-year-old, Frosted won the Wood Memorial (G1) before finishing fourth in the 2015 Kentucky Derby. He returned to finish second behind American Pharoah in the Belmont Stakes. The Kiaran McLaughlin trainee put it all together as a 4-year-old, capturing the Whitney (G1) and Met Mile (G1) as well as the Al Maktoum Challenge (UAE Gr. 2).

Frosted is the leading second-crop sire by earnings. Besides Travel Column, who is his first graded winner, Frosted’s offspring include Santa Ynez Stakes runner-up Frosteria and Ten for Ten, who placed second in the Nashua (G3) and Remsen (G2).

Their dam Swingit is a multiple-listed-winning turf miler. She captured the Jessamine Stakes as a 2-year-old and continued her winning ways with victories in the Edgewood Stakes and Furl Sail Handicap. Swingit’s half-sister Singit (Sultry Song) is a stakes-winning turf sprinter.

Travel Column’s fourth dam has a harrowing story with a happy ending. Carnauba, a daughter of Carnival Queen, was the Italian champion 2-year-old and champion 3-year-old filly who was kidnapped by Italian horsenappers and held for $250,000 ransom. Owner Nelson Bunker Hunt refused to pay a dime. Desperate, the horsenappers, in constant contact over four months, lowered their ransom to $13,000. Hunt agreed, and arrangements were made to toss the money over a hedge. Hunt got the police involved, cleverly made up a bundle of old newspapers and tossed the money. The police rounded up the group of six horsenappers but were unable to find Carnauba. The horsenappers had hidden the filly in a girls school riding academy. The high-spirited Carnauba was too high-spirited for the youngsters to handle, and Carnauba was eventually sent to a butcher’s yard. Fortunately, Carnauba was found slightly the worse for wear. She was shipped to Hunt’s Blue Grass Farm, where she happily lived out her life.

Moonlight d’Oro was successful in her first graded stakes attempt and won the Las Virgenes (G3) by 1 1/2 lengths over Santa Ynez Stakes winner Kalypso. The Richard Mandella trainee has a 4: 2-1-1 record and $163,040 in earnings. Her Las Virgenes (G3) victory netted her 10 Oaks qualifying points. Stonehaven Steadings bred Moonlight d’Oro. Spendthrift Farm bought her for $620,000 from the Keeneland September yearling sale, and she’s campaigned in conjunction with MyRacehorse.

Medaglia d’Oro is consistently ranked in the top 20 of the North American General Sire List. His son Risk Taking captured the Withers Stakes (G3) the same day that Moonlight d’Oro won the Las Virgenes, and his daughter Javanica was a gallant second against the boys in the El Camino Real Derby.

Moonlight d’Oro is the fourth foal and third winner out of Venetian Sonata. Her half-sister Olive Branch (Speightstown) was third in the 2016 Adirondack Stakes (G2). Venetian Sonata has a yearling Justify colt.

Curlin’s Catch made short work of six Kentucky Oaks hopefuls in the listed Suncoast Stakes at 1 mile 40 yards at Tampa Bay Downs. The Mark Casse trainee led gate to wire, drawing away by 4 1/2-lengths. The bay filly has a 4: 2-1-0 record with $103,454 in earnings. She owns 10 Oaks qualifying points. Sam-Son Farm bred Curlin’s Catch. The filly sold for $180,000 at the Keeneland September Yearling Sales and returned in the OBS April 2-year-olds In Training Sale, where she attracted $430,000 from Breeze Easy LLC.

Catch the Thrill is the only stakes winner out of Canada’s 2000 champion 3-year-old filly, Catch the Ring (Seeking the Gold). Catch the Thrill won the restricted Princess Elizabeth Stakes at Woodbine at 1 1/6 miles as a 2-year-old. Three half-siblings, Cognashene (Dynaformer), Finn’s Jewel (Giant’s Causeway), and Kitten’s Boy (Kitten’s Joy) are restricted stakes placed at Woodbine, although Cognashene did finish third in the Grade 3 Singspiel Stakes.

The class continues with the third dam, Radiant Ring (Halo). The mare raced for four years, earning $775,478 in 33 starts. She was a multiple Grade 2 and 3 winner and placed in the Queen Elizabeth II Challenge Cup (G1).