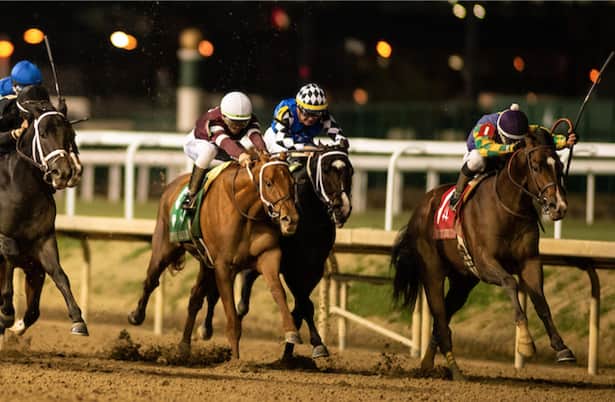 There was a mad, exciting scramble down the stretch in the Grade 2 Kentucky Jockey Club Stakes, with five lined up across the track. But, in the end, Instant Coffee broke free in the final sixteenth to win the race by 1 1/4 lengths as the favorite. Only a head and two noses separated the second through fourth-place finishers.

Instant Coffee showed similar fortitude when he won his seven-furlong debut at Saratoga by 3/4 length. Next, the Brad Cox trainee was asked to ship, stretch to 1 1/16 miles and face the formidable Forte in the Breeders' Futurity (G1). Instant Coffee made a late run and earned a credible fourth place, losing the photo for third by a head.

Instant Coffee is by leading first-crop sire Bolt d'Oro out of a daughter of Uncle Mo, the champion 2-year-old colt, so it's no surprise that he's a win-early type. Despite the precociousness, there's quality and stamina in his pedigree.

Bolt d'Oro won his first three starts, including a pair of Grade 1s, the Del Mar Futurity and FrontRunner Stakes. But after an extremely wide trip, he failed as the favorite in the 2017 Breeders' Cup Juvenile.

Bolt d'Oro regrouped the following year to capture the San Felipe Stakes (G2) and was second to Justify in the Santa Anita Derby (G1). The bay son of Medaglia d'Oro retired to Spendthrift Farm after off-the-board finishes in the Kentucky Derby and Metropolitan Handicap (G1).

Bolt d'Oro's pedigree is filled with graded winners. His sire and first three damsires are in the bloodlines of past classic heroes, and his distaff line is filled with class.

Bolt d'Oro originally stood for $25,000 and saw his fee rise to $35,000 for the coming year. He is off to an excellent start at stud, getting talented, precocious youngsters, including graded winners Major Dude and Boppy O, plus Best Pal (G3) runner-up Agency, Bashford Manor Stakes runner-up Owen's Leap, and Surfer Girl runner-up Bolt's Broad.

It all started with Instant Coffee's third dam, Miss Mary Apples (Clever Trick). A win-early type, Miss Mary Apples placed in three stakes as a juvenile, including the listed Fashion Stakes, where she missed the victory by a head, and a second-place finish in the Schuylerville (G2). At 3, she placed in the Cincinnati Trophy Stakes, and at 4, a black-type sprint at Sam Houston.

Instant Coffee's dam Follow No One (Uncle Mo - Miss Red Delicious, by Empire Maker) hit the board in eight of 12 starts as an allowance-class competitor. Her sole black-type earnings came with a third-place finish in the seven-furlong Alma North Stakes. Instant Coffee is her first foal. She has a 2021 filly by Frosted.

Follow No One's half-sister Nootka Sound (Lonhro) hit the board in four of five starts, including a victory in the off-the-turf Soaring Softly (G3) and a runner-up finish against the boys in the turf sprint Bridgetown Stakes. Follow No One's three-quarter sister Golden Delicious (Harlan's Holiday) captured the Mrs. Presidentress Stakes, a 7 1/2-furlong contest over Gulfstream Park's turf course, in her third start.

Uncle Mo is a young broodmare sire with only 122 runners, 80 winners and 10 stakes winners, including Interstatedaydream, heroine of this year's Black-Eyed Susan (G2), and last year's Iroquois Stakes (G3) winner Major General. So far, his daughters' stakes-winning offspring have been successful to 1 1/8 miles, and there's no reason they can't win going farther. Remember, Uncle Mo got Kentucky Derby winner Nyquist in his first crop.

As an interesting note for pedigree geeks, Instant Coffee and Breeders' Cup Juvenile hero Forte (Violence) are bred on similar lines. Both are by sons of Medaglia d'Oro. Instant Coffee's damsire Uncle Mo is out of an Arch mare, and Forte's damsire Blame is a son of Arch.

Showing just how quickly form and fortunes change, the Kentucky Jockey Club winners are hit or miss to make it into the Kentucky Derby starting gate. Eight of the last 13 winners vied for the roses, but only one, Super Saver (2010), was successful.

There's no telling how far Bolt d'Oro’s offspring will want to run, but with a stamina-laden distaff line that includes A.P. Indy and Lord at War as his first two damsires, I expect there will be some classic distance-winning progeny in his future.

Uncle Mo sired a Kentucky Derby winner in his first crop, so it's a matter of time before his daughters get winners beyond 1 1/8 miles.

Instant Coffee has a classic conformation, similar to his sire's. He's professional, switching leads and keeping a straight path, and he is comfortable running with other horses.

He raced three wide in the Kentucky Jockey Club and was relaxed while rating behind horses, his ears flopping slightly, waiting for the "go" signal. Instant Coffee made a sustained drive down the backstretch and went six wide around the turn. He drifted in to engage other horses down the stretch, and winning the mini-battles helped propel him forward.

Obviously, only time will tell whether this year's Kentucky Jockey Club becomes a key race for next year's preps and whether Instant Coffee's pedigree, talent and conditioning take him to the next level.