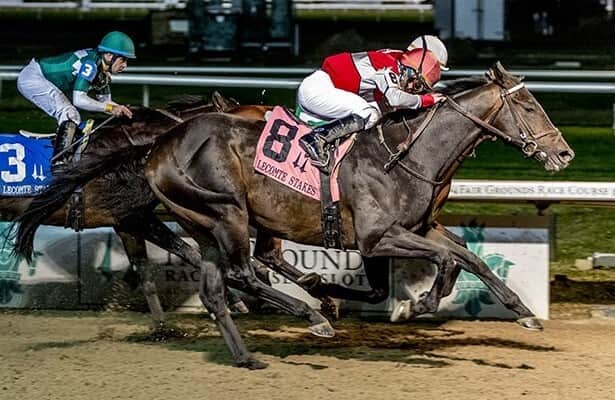 In a move reminiscent of his sire, Call Me Midnight stormed down the Fair Grounds stretch on Saturday and struck the wire in front of the pacesetter Epicenter by a head in the Grade 3 Lecomte Stakes, besting Breeders' Cup Juvenile runner-up Pappacap by three-quarters of a length.

Last year, Call Me Midnight faced challenging fields during his quest to earn his first victory. In September, in a key seven-furlong maiden race at Churchill, Call Me Midnight finished fourth, beaten a nose for third place by Giant Game and ahead of Epicenter and Surfer Dude. Next out at 1 1/16 miles at Keeneland, he followed up with a fast-closing second to Giant Game, who returned to finish third in the Breeders' Cup Juvenile.

Call Me Midnight returned to Churchill to win his fifth start, a one-mile maiden event. He returned 15 days later and finished 10th in the Kentucky Jockey Club (G2) after a very wide trip.

Call Me Midnight's breeder, Hartwell Farm, generally sells its weanlings, and he was no exception. The colt went through the sales ring as a weanling and yearling before being purchased at last year's OBS March 2-year-olds-in-training sale for $80,000 by his owner Peter Cantrell and put into the capable hands of Keith Desormeaux.

It's fitting that Call Me Midnight (Midnight Lute - Overseen, by First Defence) won the Lecomte Stakes, given his pedigree, his trainer being a Louisiana native and the race's history.

The Lecomte Stakes, originally monikered in 1943 as the LeCompte Handicap for 4-year-olds, took its name from a town in Louisiana, LeCompte. Interestingly, the town received its name from Lecomte, the only horse to defeat the famous Lexington.

From the start, trainer Bob Baffert pegged Midnight Lute as a special horse, but this is a story of "what might have been." Standing 17 hands, the muscular colt debuted in late July of his 2-year-old season. In what would become his typical running style, Midnight Lute closed powerfully on the outside and mowed down his competition by 1 1/4 lengths.

Although Midnight Lute was away from the races for a year because of a throat problem that hampered the colt's ability to perform at longer distances, there was no stopping Midnight Lute's extraordinary talent.

As a 3-year-old, he set a track record at Keeneland for seven furlongs at 1:24.38 over the Polytrack in the Perryville Stakes (G3). Then at 4, Midnight Lute splashed his way to a 4 3/4-length win in the Breeders' Cup Sprint, setting a record for the largest winning margin and earning an Eclipse Award as champion male sprinter.

Midnight Lute competed twice as a 5-year-old, and in his swan song the champ went out on a high note, winning his second consecutive Breeders' Cup Sprint in 1:07.08, the fastest time in the history of the race.

Midnight Lute retired to stud at Hill 'n' Dale Farms in Kentucky for $20,000. His fee later dropped to $15,000 after his initial season and remains steady.

Midnight Lute's listed- and graded-winning offspring are strongest from eight to nine furlongs. He has one winner at 10 furlongs, 2013 Queen's Plate hero Midnight Aria.

Call Me Midnight's stamina-filled distaff line is a study in the international excellence of the Juddmonte Farms breeding program. Three of his first five dams, Slightly Dangerous (Roberto), Where You Lead (Raise a Native), and Noblesse (Mossborough (GB)), are reines-de-course (superior females).

Call Me Midnight is the second black-type earner from the unraced Overseen (First Defence - Jibe, by Danzig). The mare bore four foals; three are winners in North America, including Bayerly Seen (Bayern), who placed in the five-furlong Woodbine Cares Stakes over the lawn. Overseen is expecting a Frosted foal this year.

Call Me Midnight's second dam Jibe (Danzig - Slightly Dangerous, by Roberto) was in the money in 5 of 9 starts, including a second-place finish in the Fillies' Mile Stakes (G1) at Ascot and a victory in the 10-furlong listed Newbury Fillies Trial Stakes.

Although none of Jibe's offspring won, her daughters are black-type producers. One of the most notable was the brilliant Taraz, who was undefeated in three starts, including the Letellier Memorial Stakes and the Martha Washington Stakes, before her untimely death.

Call Me Midnight's damsire First Defence (Unbridled's Song - Honest Lady, by Seattle Slew) raced under the Juddmonte silks in the barn of the late, great Bobby Frankel and was in the money in 9 of 14 starts, including a 6 3/4-length victory in the Forego Stakes (G1).

First Defence's dam Grade 1-winning sprinter Honest Lady was a half-sister to Grade 1-winning route horses Empire Maker, Chester House, Chiseling, and Grade 2-winning miler Decharchy. Despite his illustrious breeding, First Defence wasn't a hit at stud, and after seven years he was sold to stand in Saudi Arabia in 2016.

First Defence is a young broodmare sire with only 109 starters. However, his daughters have produced seven listed and graded winners, including Hollywood Derby (G1) winner Beyond Brilliant (Twirling Candy), plus multiple graded winners Tacitus (Tapit) and Anothertwistafate (Scat Daddy). Tacitus is the only one of them with a victory at 10 furlongs.

Lecomte Stakes winners have fared better in the Preakness than in Kentucky. In recent years, Lecomte heroes Oxbow (2013) and War of Will (2019) won the Preakness, and Oxbow placed in the Belmont Stakes before Midnight Bourbon finished second in last year's Preakness.

His pedigree and conformation indicate that nine and 10 furlongs should be within Call Me Midnight's scope.

The dark bay colt has his sire's late-closing running style, and these types generally fill out the exotics in the Derby because of needing a quick early pace to mow down the tiring field and having to navigate through rush-hour traffic down the stretch. So far, eight closers, including Country House, have captured the Kentucky Derby since 2000.

Keith Desormeaux might point Call Me Midnight to the Risen Star (G2) on Feb. 19.