Derby pedigrees: Can Soup and Sandwich handle the distance? 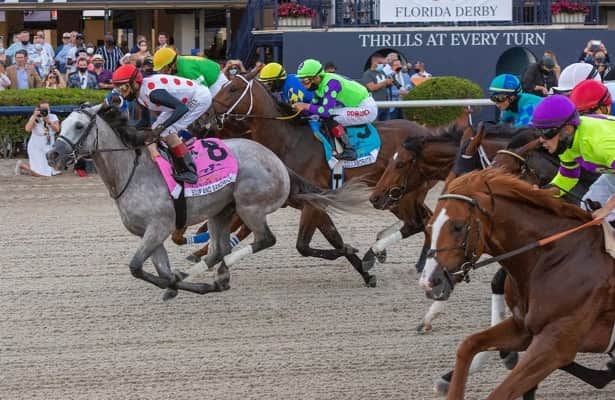 Photo: Liz Lamont/Eclipse Sportswire
Kentucky Derby 2021 Pedigree Reports on HRN
Soup and Sandwich punched his ticket to the 2021 Kentucky Derby with a runner-up finish in the Florida Derby (G1). After pressing the early pace set by Nova Rags, Soup and Sandwich grabbed the lead after a half-mile. He held the advantage until the upper stretch, then Known Agenda flew by. The pretty gray Soup and Sandwich was clearly tiring but held off the late, mild bid of Greatest Honour.

Soup and Sandwich started his career in January, dominating maidens by 7 1/4 lengths in a 6 1/2-furlong maiden event. The Mark Casse trainee followed up with a 2 3/4-length victory over two rivals in a mile and forty-yard allowance race at Tampa Bay Downs. Soup and Sandwich has two wins and a second-place finish in three starts, with earnings of $203,875. The Live Oak Plantation homebred has 40 qualifying points and is in 13th place on the Derby leaderboard.

Pedigree: Soup and Sandwich (Into Mischief – Souper Scoop, by Tapit) has a middle-distance pedigree. He strongly resembles his damsire physically and mentally. He didn’t switch leads in the stretch of the Florida Derby. (See the Soup and Sandwich pedigree chart).

The blacktype earners in Soup and Sandwich’s female family are composed mostly of sprinter/miler types, with the occasional stakes-placed runner at nine furlongs.

Soup and Sandwich is the second foal and first to race out of the allowance-class miler Souper Scoop. The gray daughter of Tapit hit the board in six of 14 starts, earning $85,556 as a dirt miler, primarily at Monmouth Park.

42 stakes winners represent Tapit as a damsire. Only Harvey's Lil Goil has won at nine furlongs, and none have been successful past that distance.

The Into Mischief/Tapit cross is popular. There have been 10 winners from 13 starters and one stakes winner, Travieza, who captured the 2018 Unzip Me Stakes as a turf sprinter. Besides Soup and Sandwich, other stakes-placed runners on this cross include Grade 2-placed miler Just a Smidge and turf miler Nate Nite Mischief.