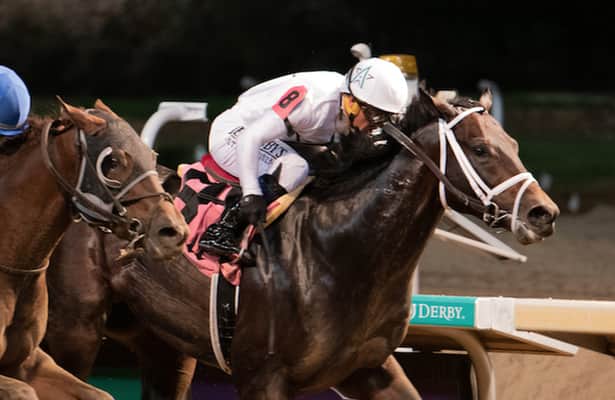 Major General launched the 2021-22 Kentucky Derby campaign with a neck victory over Tough to Tame in the Iroquois Stakes (G3) at Churchill Downs on Saturday.

Conditioned by Todd Pletcher and expertly ridden by Javier Castellano, Major General traveled 1 1/16 miles in 1:44.88. The dark bay colt races for the connections of WinStar Farm and Siena Farm. Undefeated in two starts, he has earned $232,525, plus 10 Kentucky Derby points and a berth in the Breeders’ Cup Juvenile.

So, is Major General a Kentucky Derby contender or a pretender?

Excitement over Constitution, the newest Kentucky Derby hopeful, rose as he captured the 2014 Florida Derby by a neck. Just weeks later, fans and his connections hit a low when Constitution withdrew from Derby contention because of a hairline fracture in his front right cannon bone. Tapit’s son returned at year-end to finish third in the Clark (G1) and captured the Donn Handicap (G1) in his 4-year-old debut. After dismal efforts in the Bernard Baruch Handicap (G2) and Jockey Club Gold Cup (G1), Constitution retired to WinStar Farm.

Constitution has the classic conformation of his third tail, sire A.P. Indy. His original stud fee of $25,000 has risen to $85,000, making him Tapit’s leading son at stud.

As the leading third-crop sire by earnings, Constitution has sired 26 stakes winners, eight of them listed or graded, and they’re capable over all surfaces and from sprints to classic distances. Although Tiz the Law is perhaps his most famous son, Constitution’s son Independence Hall earned 2019 Derby points for victories in the Nashua (G3) and Jerome Stakes.

Major General’s first five dams were indifferent runners if they made it to the track at all. But they have made up for it in the breeding shed. Major General is the first foal out of Uncle Mo’s unraced daughter No Mo Lemons. His second dam Lemon Lady was unplaced in four starts but produced Lemon Juice, a precocious son of Johannesburg. As a juvenile, Lemon Juice won a pair of sprints on dirt and turf, and as a 3-year-old, he stretched to finish third in a one-mile overnight stake. A daughter of Lemon Lady bore a French-listed stakes placed runner.

All the fun is in Major General’s third generation. Leofric leads the descendants of his third dam Lady of Choice (Storm Bird), winner of the 2018 Clark Handicap (G1), plus two other graded stakes. Others include Multiple Choice, a multiple-graded-sprint veteran of 74 starts, the classy multiple stakes-winning turf sprinter Inspired, who earned $439,785 in 22 starts, and Elusive Target, who recently placed in the Richard Radke Memorial.

2010 champion 2-year-old colt Uncle Mo is an exciting young top 10 sire by earnings. He established himself at the top of the 2015 first-crop sire board, getting 2-year-old champ and Kentucky Derby winner Nyquist in his first crop.

He is a young broodmare sire, with only 56 starters, but 30 of those have won, and three are black-type winners.

The trio of modern bloodlines of Northern Dancer, Mr. Prospector and Bold Ruler are intermingled in most Thoroughbreds, so Uncle Mo brings a refreshing outcross as a descendant of Gray Sovereign through Caro on his sire’s side and Roberto blood through his dam.

Caro and Roberto were leading broodmare sires and although the verdict is still out, Uncle Mo is off to a promising start and might eventually join them.

The dark bay Major General has classic conformation and moves smoothly over the track without excessive leg action. He overcame a stumble at the start of the Iroquois and found himself behind horses but overcame the poor beginning. Major General targets and passes horses, but once he hits the lead, he waits on his rivals to catch up and seems to enjoy the head-to-head fight. He leaned on his opponents in both starts.

So, is Major General a Kentucky Derby contender or pretender?

The Iroquois was created in 1982. None of the winners have returned to win the Kentucky Derby, but we’re getting closer. In the last five years,  Iroquois runner-ups Midnight Bourbon (2020) and Looking at Lee (2016) and fourth-place finisher Ride on Curlin (2013) all hit the board in a Triple Crown event.

One Iroquois winner from the last six who ran in the Breeders’ Cup Juvenile hit the board. Not This Time (2016) missed the Juvenile victory by a neck and was injured and retired.

Major General has the pedigree chops to win at classic distances. But the youngster has some things to sort out mentally if he is to stamp himself as a Kentucky Derby contender. This may come with experience and time.