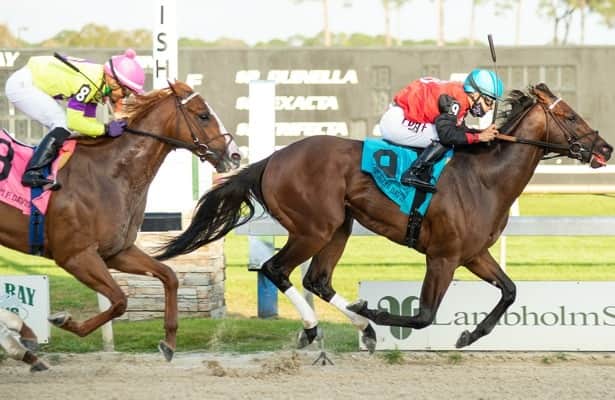 Top-ten leading sire Candy Ride is represented by two 2021 Kentucky Derby hopefuls in recent weeks. His son Candy Man Rocket continued to impress in the Sam F. Davis Stakes (G3), while Rombauer, by Twirling Candy, kicked off the year with his first stakes victory in the El Camino Real Derby.  Into Mischief’s son, Mandaloun turned the tables on rivals in the Risen Star (G2), while  Medaglia d’Oro’s Risk Taking triumphed in the Withers Stakes (G3).

Let’s take a closer look at these 3-year-old colts.

(Into Mischief - Brooch, by Empire Maker)

Mandaloun vindicated his loss in the Lecomte Stakes with a 1 1/4-length win over Proxy in the Risen Star Stakes (G2) at the Fair Grounds after adding a set of blinkers to help him focus. Lecomte victor Midnight Bourbon finished third, a half-length behind Proxy. Mandaloun owns 52 qualifying points and leads the list of Kentucky Derby hopefuls. The Juddmonte Farms homebred is conditioned by Brad Cox and has a 4-3-0-1 race record and $351,252 in earnings.

This is the second year that the Risen Star Stakes has been held at nine furlongs. Previously the race was contested at eight and a half furlongs. Last year, the Risen Star was split into two divisions, won by Mr. Monomoy and Modernist. Neither winner contested the Kentucky Derby or Preakness, and Modernist placed seventh in the Belmont Stakes.

In the last decade, seven Risen Star winners competed in the Triple Crown races. The best finishes were by Preakness winner War of Will (2019) and runner-up  Bravazo (2018). Mucho Macho Man (2011) finished third in the Kentucky Derby.

Pedigree: Mandaloun has a middle to classic distance pedigree. Turf could be an option as he matures  (see pedigree chart).

Into Mischief needs no introduction as leading sire. Out of 56 graded/listed winners, three -- Kentucky Derby (G1) winner Authentic, Super Derby (G2) winner Vicar’s in Trouble, and Pan American (G2) turf router Bema’s Boy -- are winners at ten furlongs and farther. Eleven of Into Mischief’s graded/listed winners have been successful at nine furlongs. Besides Mandaloun, the stallion is represented on the Kentucky Derby trail by Sham Stakes winner (G3) Life Is Good.

The stakes earners in Mandaloun’s distaff line are European milers and middle-distance runners.

He is the second foal and first stakes winner out of Brooch, a multiple Group winner in Ireland. The daughter of Empire Maker captured the Ridgewood Pearl Stakes (G2) by two and a quarter lengths traveling a mile, and stretched her speed to nine and a half furlongs and won the Denny Cordell Lavarack Fillies Stakes (G3) by a half-length. Brooch also captured the one-mile listed Ruby Stakes.

Mandaloun has two unnamed full brothers, a 2-year-old and a yearling.

Brooch’s half-sister Caponata (Selkirk) captured two listed events in Ireland at about a mile and placed in four Group 2 and 3 contests between nine and ten furlongs. Two of her foals are competing and have won as turf sprinters but don’t own blacktype.

The third generation of Mandaloun’s female family is much the same. His second dam Daring Diva (Dansili (GB)) is a listed-winning miler in France. Her full sister Emulous (GB) captured the one-mile Matron Stakes (G1) as well as five other group stakes between seven and eight furlongs.

After graduating at nine furlongs at Aqueduct by 2 1/4-lengths, Risk Taking beat a field of eight others by 3 3/4-lengths at the same distance in the Withers Stakes (G3). The Chad Brown trainee has a 4-2-0-0 record with $182,530 in earnings and owns 10 Kentucky Derby qualifying points. Risk Taking was bred by G. Watts Humphrey Jr. and sold as a Keeneland September Yearling for $240,000. He’s campaigned by Klaravich Stables.

In the last decade, five Withers winners made it to the Triple Crown races. The best placing was by Revolutionary (2013), who was third in the Kentucky Derby, and last year, Max Player finished third in the Belmont Stakes.

Pedigree: Risk Taking handles middle distances and should also be proficient at classic distances. Turf could be an option as he matures (see pedigree chart).

When Medaglia d’Oro’s name is mentioned, fans often think of him as the sire of great fillies. His most accomplished offspring are fillies, the champions Songbird, Rachel Alexandra, and Wonder Gadot, plus multiple Grade 1 winners Marketing Mix and Elate. However, Medaglia d’Oro’s sons are noteworthy too and include Grade 1 winners Mshawish, Bolt D’oro, Violence, and his Australian champion Vancouver.

Risk Taking is the third foal, and first winner out of out the multiple stakes-placed turf miler Run a Risk. He has two unnamed half-brothers, both by Gun Runner,  a 2-year-old and a yearling.

His second generation includes a trio of turf stakes winners, Grade 3 winners Rey De Cafe (Kingmambo) and El Crespo (A.P. Indy), capable up to nine furlongs, and Tricky Causeway (Giant’s Causeway), who won the eleven furlong Awad Stakes. Risk Taking’s second dam is a half-sister to King Cugat (Kingmambo), a multiple graded winner between eight and a half furlongs and eleven furlongs. He placed twice at twelve furlongs in two Grade 1 events, the Sword Dancer Invitational behind the pretty gray With Anticipation and Turf Classic Invitational behind Timboroa.

The Medaglia d’Oro/ Distorted Humor cross has yielded 45 starters from 74 foals. 31 are winners, and eight are stakes winners, including Elate, winner of the Alabama (G1) and Delaware Handicap (G2) at ten furlongs, and New Money Honey, who captured the Belmont Oaks Invitational (G1) at ten furlongs over the lawn.

Rombauer added his name to the Kentucky Derby qualifying list when he captured the El Camino Real Derby by a neck in his 3-year-old debut. Last year, the Michael McCarthy trainee was a fast-closing second to Get Her Number in the American Pharoah Stakes (G1). Rombauer was bred and is campaigned by John & Diane Fradkin. He has a 5-2-1-0 record and $210,500 in earnings.

In the last decade, two El Camino Real Derby made it to the Triple Crown Races. Azul Coast (2020) was tenth, and Daddy Nose Best (2012) was unplaced in the Derby and Preakness.

Candy Ride’s son Twirling Candy is a graded winner from seven to nine furlongs, and he placed twice at ten furlongs. Beaten a head by Acclamation in the Pacific Classic Stakes (G1), in which a new track record of 2:00.61 was set, and a third-place finish in the 2011 Hollywood Gold Cup (G1).

Rombauer is the fourth foal and third black type earner out of the unraced Cashmere. His brother Cono (Lucky Pulpit) is restricted placed at nine furlongs over the turf. Treasure Trove (Tapizar) is a restricted placed miler. Rombauer’s sister Republique (Strong Mandate), is a 2-year-old, and he has a yearling brother named Alexander Helios (Cairo Prince).

Out of 14 foals in the second generation, Cashmere and a half-brother never raced. The family is lead by the aforementioned California Flag (Avenue of Flags) and his full sister, the downhill turf sprint specialist, Cambiocorsa, who captured five Grade 3/listed races at Santa Anita and Hollywood Park. Their brother Shadow Raider (Memo (CHI)) was beaten by a nose in the Bay Meadows Breeders’ Cup Handicap (G3) at nine furlongs on the turf.

Cambiocorsa is creating her own dynasty. Out of eleven foals, eight have started, six are winners and five of those own black type. Schiaparelli (Ghostzapper) and Moulin De Mougin (Curlin) are a Grade 2 winners; Alexis Tangier (Tiznow) and Bronson (Medaglia d’Oro) are listed winners. Grade 1-placed Vionnet (Street Sense) bore 2008 Cartier Horse of the Year, Roaring Lion.

Candy Man Rocket continued to impress in the Sam F. Davis Stakes (G3) after a spectacular 9 1/4-length maiden score. After following the early pace, the Bill Mott trainee took over in the stretch and held off stablemate Nova Rags by a length. R. S. Evans bred Candy Man Rocket. The dark bay colt went through the auction ring three times; the final time was the OBS April 2-year-old in training sale, where he was purchased for $250,000 by Frank Fletcher Racing Operations. Candy Man Rocket has a 3-2-0-0 record and $144,824 in earnings, plus ten Kentucky Derby qualifying points.

Five Sam Davis Stakes winners made it into the Kentucky Derby starting gate in the last decade. The best was Destin (2015) who placed sixth, and returned to finish second in the Belmont Stakes.

Pedigree: Candy Man Rocket has a miler pedigree, although he might go to nine furlongs with maturity and other factors (see pedigree chart).

Candy Ride was a champion miler in his homeland of Argentina. He captured his first California race by three lengths in a 1 1/16 mile dirt allowance event. Candy Ride returned with a 3/4 length victory in the nine-furlong American Handicap over the old Hollywood Park turf course. In what would be the last race of his career, Candy Ride made short work of Medaglia d’Oro in the 1 1/4 mile Pacific Classic, dominating by 3 3/4 lengths.  He set a new track record in 1:59.11 in 2003, which still stands.

Candy Ride is consistently in the top ten of the leading sire ranks. His most accomplished progeny are 2017 Horse of the Year Gun Runner, 2013 Champion 2-Year-Old Colt Shared Belief – who later captured the Santa Anita ‘Cap and Pacific Classic at 1 1/4 miles, and 2018 Champion 2-Year-Old Colt Game Winner, who stretched to nine furlongs in the Los Alamitos Derby (G3).

Candy Man Rocket’s half-siblings are sprinter/milers, and his dam Kenny Lane won as a turf sprinter at the allowance level.  Candy Man Rocket is the first in the immediate family to earn black type status. He has a 2-year-old half-brother Notacry (Orb), who sold for $10,000 in last year’s Keeneland January sale and also has a yearling half-sister by Tonalist.

The second generation of the distaff line is comprised of sprinter/miler black type earners on dirt and turf. Although Funny Kid (Lemon Drop Kid) out of Kenny Lane’s grade 3-placed half-sister Pitamakan (Danzig) is a French Group 3 winning marathon horse, successful at 15 and 16 furlongs.

The Candy Ride/Forestry bloodline cross has produced a dozen starters, ten winners, one blacktype winner, and one stakes-placed runner.