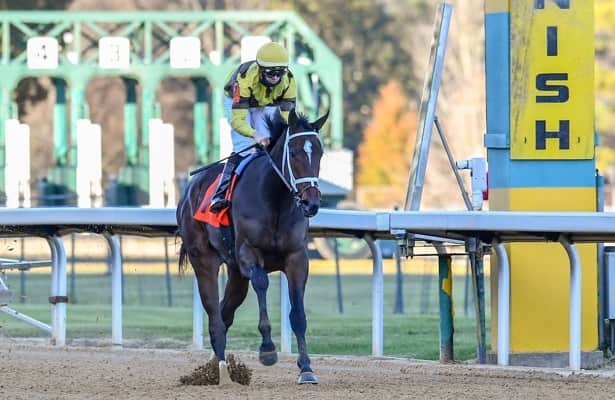 Caddo River was the 10-length hero of the Smarty Jones Stakes. He regressed to fifth place in the Rebel Stakes (G2) when he became rank while being asked to rate behind Concert Tour.

Reverting to his customary pacesetting tactics, the Brad Cox trainee rebounded in the Arkansas Derby (G1) and dueled with Rebel Stakes (G1) winner Concert Tour. The pair were passed late by Super Stock.

Caddo River has 50 qualifying points for the 2021 Kentucky Derby and is 11th on the leaderboard. As of this writing, Brad Cox is unsure whether he will send Caddo River or Risen Star (G2) hero Mandaloun to the Kentucky Derby. After his Risen Star victory, Mandaloun finished an uncharacteristic sixth in the Louisiana Derby (G2) after pressing the pace.

Pedigree: Caddo River (Hard Spun - Pangburn, by Congrats) might find nine furlongs at the top of his comfort zone because of his pacesetting style. (Click here for the Caddo River pedigree chart.)

In 2007, Hard Spun was a member of the stellar 3-year-old crop that included Kentucky Derby hero Street Sense, future Hall of Fame member Curlin and the amazing Rags to Riches, who beat Curlin in an epic Belmont Stakes. Grade 1 winner Any Given Saturday was part of this group, and although she owned only a maiden and allowance win at the time, Zenyatta would become one of the best mares of her generation.

Hard Spun won graded stakes from seven to nine furlongs and placed at 10 furlongs. His offspring have no limitations and win at all distances and over all surfaces.

Caddo River is out of stakes winner and multiple-graded-placed miler Pangburn, an honest mare who hit the board in nine of 17 tries. The Smarty Jones winner is her second foal to compete and first stakes winner. Pangburn has a 2-year-old Into Mischief filly named Como Square, plus a yearling Nyquist colt.

Pangburn is one of a trio of stakes winners produced by It’s True Love (Is It True). It’s True Love won at 1 1/16 miles and placed at a mile and 1 1/8 miles. Her daughter Eres Tu (Malibu Moon) captured the Allaire DuPont Stakes at 1 1/8 miles, and a son, Ain’t Got Time (Roman Ruler), is a stakes-winning miler.

Congrats, a well-bred son of A.P. Indy, is a young broodmare sire with just four graded/listed winners. The most accomplished of his daughters’ offspring is last year’s Kentucky Oaks heroine Shedaresthedevil. Two winners are turf routers, which gives a good indication that he will pass along his sire’s stamina.