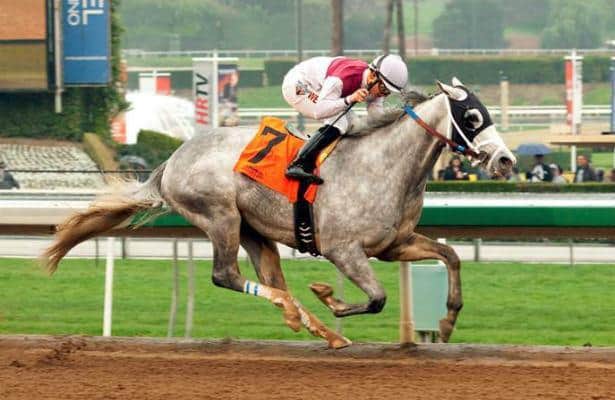 An update on the 2015 Kentucky Derby contenders that are off the trail, had setbacks, or haven’t breezed in a month.

Off the Trail
Conquest Typhoon (4 points) – Runner-up in the Grey Stakes at Woodbine will stay on turf after winning the Cecil B. DeMille Stakes (G-2) at Del Mar.
Calculator (17 points) – Injured (again) after his runaway victory in the Sham.  Out of action for the next six months.  Barn declined to state the nature of the injury.
Leave the Light On (10 points) – hurt his right hind ankle during a morning work and had surgery, knocking him out of the spring classics.
Mawthooq (0 points) – third in the Mucho Macho Man Stakes, McLaughlin was pointing the son of Distorted Humor towards the Withers. Out of action after suffering a recent tendon injury.  Might see him later this summer.
Injured/Setbacks/MIA
Flashaway (1 point) – worked twice at Palm Meadows in December. MIA since then.
Saratoga Heater (1 point) – hasn’t recorded a breeze since his fourth place finish in the Delta Jackpot.
Tough Customer (1 point) – MIA since his fourth place finish in the Keeneland Breeders’ Futurity.
Updates/Back on the Trail
American Pharoah (10 points) -  Withdrawn from the Breeders’ Cup Juvenile due to a bruised foot. Had his first  breeze on February 2 and will have only two starts before the Kentucky Derby.
Bold Conquest (6 points) – Third in the Claiborne Breeders’ Futurity at Keeneland. Son of Curlin has been breezing regularly at Fair Grounds since January.
Competitive Edge (0 points) -  Hopeful Stakes victor  endured a hairline fracture in his left foreleg. All healed now and he’s been breezing since January 11.  He should surface in a race sometime in February.
Hashtag Bourbon (2 points) – Third in the Iroquois Stakes, he missed some time due to surgery for an ankle chip. Since recovered, he's been breezing at Tampa Bay Downs since January 10.
American Pharoah Tough Customer Competitive Edge Saratoga Heater Bold Conquest Calculator Conquest Typhoon Flashaway Leave the Light On Hashtag Bourbon Mawthooq Kentucky Derby Trail