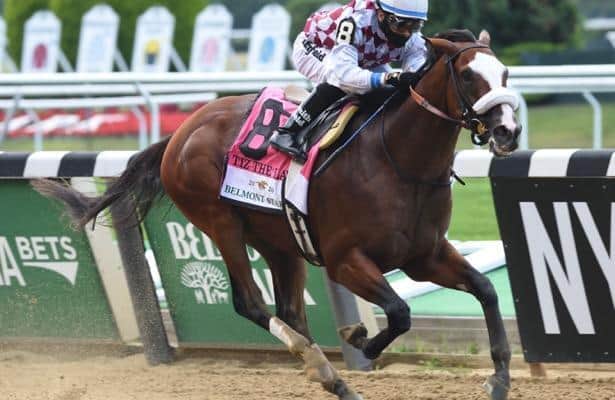 The countdown to the 2020 Kentucky Derby kicks off with pedigree profiles of the major contenders. This week we review the Derby favorites, Travers Stakes hero Tiz the Law, Blue Grass winner Art Collector, and Santa Anita Derby victor Honor A. P.

Let’s take a closer look at the pedigrees of our Kentucky Derby favorites.

Tiz the Law toyed with Uncle Chuck and the rest of the Grade 1 Travers field, winning by 5 1/2 lengths in 2:00.95. If he had been pushed, Tiz the Law could have eclipsed Arrogate’s record. Manny Franco did the right thing and left plenty in the tank for the Kentucky Derby. He has 327 qualifying points, the most of any Derby contender.

Tiz the Law is on top of his game, the likely favorite, and the class of the Kentucky Derby. He also has a varied running style and can sit just about anywhere. Undefeated in all four starts this year, including the Florida Derby and Belmont Stakes, racing fans consider him the best of this year’s crop of 3-year-old colts. 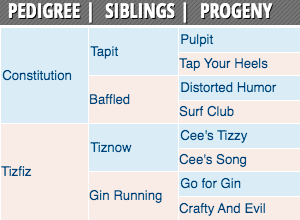 Pedigree: Tiz the Law has the breeding to enjoy classic distances. He’s a powerful-looking colt with the conformation of a distance horse. He moves smoothly, with no paddling.

Constitution, a young son of Tapit, is the leading second-crop sire, in part because of the exploits of Tiz the Law. His six graded/listed winners include multiple graded turf miler Laura’s Light, plus last year’s precocious juveniles Independence Hall, Amalfi Sunrise and By Your Side.

Constitution won multiple times at 1 1/8 miles but failed in his only attempt at 1 1/4 miles in the Jockey Club Gold Cup Stakes (G1), which was held over a sloppy track. Tiz the Law is his first foal to handle 10 furlongs. I expect Constitution may become Tapit’s best son at stud in ensuing years.

Tiz the Law was a bargain for $110,000 at the 2018 Fasig-Tipton August sale of New York-breds. He is the fifth foal and first stakes winner in the immediate family, although his three-quarter sister Awestruck (by Constitution’s sire, Tapit) is a multiple stakes-placed sprinter. Tiz the Law has a 2-year-old half-sister named Angel Oak (Mission Impazible) and an unnamed yearling half brother by the same sire. Neither has sold at auction.

Tizfiz, by Tiznow out of a daughter of Go for Gin, is a multiple winner over turf and Polytrack. She captured the San Gorgonio Handicap(G2), and the boys in the Edward J. Debartolo Sr. Memorial Handicap, both races at 1 1/8 miles. The hardy mare earned $410,944 in 20 starts. Tizfiz is a full sister to Grade 3 winner and sire Fury Kapcori, and she’s a half-sister to Turf Paradise Derby hero Dixie Commander. This is the distaff line of Champion Juvenile Favorite Trick and multiple Grade 1-winning juvenile, Moonshine Memories.

Surprisingly, Tiz the Law is the only graded or listed winner based on the Tapit/ Tiznow cross.

Art Collector also is riding a four-race win streak into the Kentucky Derby, although his resume holds only two stakes wins: the Blue Grass Stakes (G2) and the listed Ellis Park Derby. 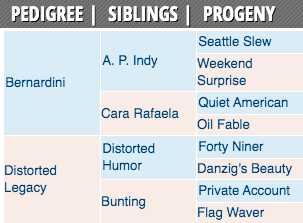 Pedigree: Art Collector has the pedigree to handle classic distances.

Bernardini is the sire of 50 graded/listed stakes winners in the U.S. and Canada. His offspring win at all distances and over all surfaces.

Art Collector is the second foal and first stakes winner out of Distorted Legacy. After a career of hit-or-miss in the allowance ranks, the chestnut mare captured the Sky Beauty Stakes at 1 1/16 miles over the Belmont dirt. Two starts later, the daughter of Distorted Humor finished second in the prestigious Flower Bowl Invitational just two lengths behind Stacelita, who would earn year-end honors as Champion Grass Mare. Distorted Legacy closed out her year with a fourth-place finish in the 2011 Breeders’ Cup Filly and Mare Turf (G1) in an exciting blanket finish, beaten only 3/4 lengths. The following year, the mare’s best work was on-the-board finishes in the Wait a While and Jersey Lilly Stakes, both at 1 1/16 miles over the lawn. The hardy competitor earned $421,466 in 26 starts.

Distorted Legacy is a half-sister to Vision and Verse, winner of the Illinois Derby (G2), who was a runner-up in the Belmont (G1) and Travers (G1). After two years at stud in the U.S., Vision and Verse moved to South America. Distorted Legacy’s half-sisters include Performing Diva, who placed in two juvenile stakes, including the Alcibiades (G2), and Broadway Express, a restricted placed runner. The distaff line also includes 2015 Breeders’ Cup Distaff heroine Stopchargingmaria and veteran turf router Bourbon Bay.

Art Collector is bred on the same cross as 2017 Vosburgh (G1) winner Takaful and My Sweet Girl, winner of the 2016 Perfect Sting (G3).

Honor A. P. announced his presence as one of the top California 3-year-olds with a 2 3/4-length victory in the Santa Anita Derby over Authentic, who had defeated him in the San Felipe Stakes (G2). Authentic returned after his Santa Anita Derby defeat to win the Haskell (G1). In his final Kentucky Derby prep, Honor A. P. finished a surprising second to Thousand Words in the listed Shared Belief Stakes at Del Mar. 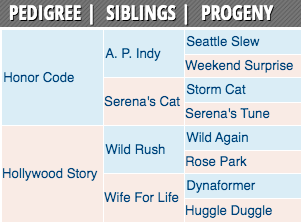 Honor A. P. is a member of the first crop of Champion Older Horse Honor Code. On the track, the stallion was a strong miler/middle distance competitor and finished third the only time he tried 1 1/4 miles. Besides Honor A. P., Honor Code’s progeny includes Travers (G1) third-place finisher and Kentucky Derby hopeful Max Player, plus three stakes-placed runners, including Bama Breeze, who placed at 1 1/8 miles over the Churchill lawn in the Audubon Stakes in June.

Honor A. P. is a member of an illustrious female family. He’s a half-brother to a trio of three blacktype earners. Miss Hollywood dominated rivals by five lengths in the 2015 Monroe Stakes sprinting seven furlongs over Gulfstream’s main track. Half-brother Hollywood Star placed in the Saratoga Special (G2), and Iroquois (G3) in 2017, and Hoorayforhollywood is a multiple listed earning sprinter.

Their dam, Hollywood Story, is a multiple Grade 1 winner from a mile to 1 1/8 miles. The daughter of Wild Rush gave notice of her class with runner-up performances in the Del Mar Debutante and Oak Leaf Stakes before finishing fourth in the 2003 Breeders’ Cup Juvenile Fillies. She returned two months later to win the Hollywood Starlet (G1). Later in her career, Hollywood Story won the Vanity Invitational Handicap (G1) at 1 1/8 miles. The mare competed for four years, and 26 of her 27 starts were in graded stakes. She retired with a 27: 4-6-6 record and earnings of $1,171,105.

Honor A. P. is bred on the same cross as multiple stakes winner Flattering Bea, who is a sprinter/miler on dirt and turf, plus Grade 3 winning turf miler Pass the Buck.