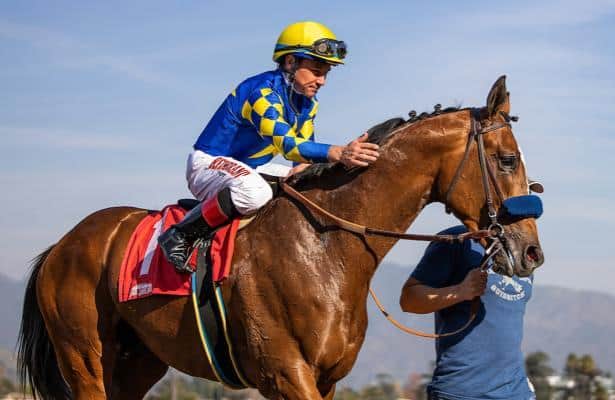 The countdown to the 2020 Kentucky Derby continues, with the spotlight on a pair of Hall of Fame trainers who generally have multiple entries in the classic race. Bob Baffert and Todd Pletcher typically have two or three contenders in the Kentucky Derby. Despite the changing Derby roster throughout the year, Bob Baffert still has a pair of Derby hopefuls in Authentic and Thousand Words, while Todd Pletcher is represented by Dr Post.

Let’s take a closer look at the pedigrees of the Hall of Fame trainer’s Kentucky Derby horses.

(Into Mischief - Flawless, by Mr. Greeley)

Authentic enters the Kentucky Derby off a desperate nose victory in the Haskell Stakes. He set an unpressured pace, stalked by multiple graded placed Ny Traffic. Authentic seemingly had Ny Traffic put away in the stretch, but his competitor made a late surge to narrowly miss the victory. Previously, Authentic tasted defeat in the Santa Anita Derby, the first loss of his career. Authentic heads to Kentucky with a 5-4-0-1 ($1,011,200) record and 200 qualifying points, more than any contender except for Tiz the Law.

Pedigree: Authentic has a miler/middle-distance pedigree.

Last year’s leading sire, Into Mischief, needs no introduction. He is represented by 59 graded/listed stakes winners in the U.S. and Canada, including dual Eclipse Champion Covfefe and the sensational track record-setting Gamine, who will meet up with Swiss Skydiver in the Kentucky Oaks. Into Mischief’s offspring are brilliant but distance challenged. Only one of his 59 graded and listed winners has won at classic distances, turf router Bemma’s Boy.

Authentic is the first foal out of Flawless, who started only twice as a sprinter/miler. She’s only one of two foals to race out of an unraced dam. The third generation of Authentic’s female family is speed-oriented. It includes Dubai Golden Shaheen hero Reynaldothewizard, multiple Grade 1 winning sprinter American Gal, Go For Wand heroine Seventh Street, and her foal, Grade 1-placed sprinter Marking.

Mr. Greeley is the damsire of 71 listed/graded winners, who are strongest up to middle distances. A few have won at classic distances, such as Eskimo Kisses, winner of the 2018 Alabama Stakes.

Authentic is bred on the same cross as Listed winning sprinter More Mischief.

Thousand Words surprised the odds-on favorite Honor A. P. in the listed Shared Belief Stakes. The large, dark-bay son of Pioneerof the Nile grabbed the lead at the outset and was pressured by Honor A. P., who was kept three wide by Thousand Words stablemate Cezanne. Thousand Words kept on determinedly and won the 1 1/16-mile contest by 3/4-length. Bob Baffert’s charge has a 7-4-1-0 ($327,000) record and 83 Kentucky Derby qualifying points.

Pedigree: This $1 million baby has a stamina over speed pedigree and the conformation to handle middle distances. However, mentally, he may not want to go farther than 1 1/16 miles.

Pioneerof the Nile gets winners at all distances, and his legacy lives on in his most accomplished son American Pharoah.

Thousand Words’ distaff line is speed-oriented. He’s the third foal and second winner out of  Pomeroys Pistol, a multiple graded winning sprinter who earned over $574,000 in her 14-race career. Pomeroys Pistol captured the Forward Gal (G2), Gallant Bloom (G2) and Sugar Swirl (G3), and placed in the Test and Prioress, both Grade 1 events.

Pomeroys Pistol is a half-sister to the multiple stakes placed sprinters Wildcat Creek and D’Cats Meow. Another half-sister bore Good Credence, who was third in the 2019 Maid of the Mist Stakes at a mile. Thousand Words’ third dam Swearingen was a multiple stakes-earning veteran turf mare who was successful from a mile to 1 1/8 miles. The hardy mare earned $673,233 in 37 starts.

Thousand Words’ damsire, Pomeroy, is a multiple Grade 1-winning sprinter who earned $845,050 in 18 starts. He sired 14 stakes winners in the seven years that he stood in America before shipping to Saudi Arabia. Thousand Words is Pomeroy’s only stakes winner as a broodmare sire.

After capturing the Unbridled Stakes at Gulfstream Park, Dr Post put forth an excellent effort in the Belmont Stakes, racing four to six wide and finishing second, clearly best of the rest. The Pletcher trainee made a mild bid in the Haskell Stakes, but could manage only third place. He has earned $361,635 with a 5-2-1-1 record. Dr Post has 80 Derby qualifying points.

Quality Road has sired 39 graded/listed stakes winners in the U.S. and Canada. His best performers include 2017 Champion 3 Year Old Filly Abel Tasman, 2017 Breeders’ Cup Dirt Mile hero City of Light and multiple Grade 1 winning sprinter/miler Bellafina. There are a couple of exceptions, but for the most part, Quality Road’s offspring are distance challenged beyond 1 1/8 miles.

Mary Delaney is a multiple graded stakes winning sprinter who earned $305,879 in 16 starts and holds the only noteworthy blacktype in three generations of the female family. Grade 1 winning turf miler Thorn Song is a distant relative.