Keeneland September Yearlings: Are Million Dollar Babies Worth It? 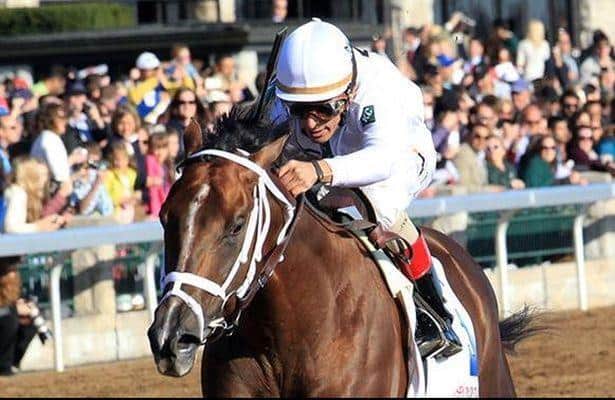 The first seven sessions of the 2015 Keeneland September Yearling Sale are in the record books. The majority of the most royally bred babies are sold within the first week. Racing website headlines blared and social media was all a twitter over the multi-million dollar session toppers every day this week.

By the end of Session Seven, eleven yearlings have been sold for $1 million or higher. To deep pocket buyers, the six or seven-figure price for a yearling is just business as usual. The cost of getting the yearling to the race track is chump change compared to the initial investment. Is the price tag worth it? How many of these costly babies make it to the track and earn back even a fraction of their initial sales price? Let’s take a look at some of the top-tier yearlings from 2009 – 2013 and see how they've progressed in their racing careers. 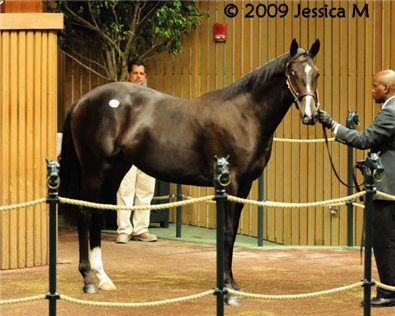 The sales topper of 2009 at $2,050,000 was Storm 'n Indian (Storm Cat – Fleet Indian, by Indian Charlie).  He is the first foal out of the Champion Older Mare of 2006. Owned by Darley Stable and trained by Kiaran P. McLaughlin, the fragile colt made just two starts and finished second in his final race.  He’s currently a show jumper.

IN STEP (Unbridled's Song - Strawberry Reason, by Strawberry Road (AUS)) was a $1 million dollar purchase by Darley Stable. The filly is a half sister to Champion Juvenile VINDICATION, plus stakes placed Scipion and Blackberry Road. In Step has won three times. She was victorious in the Queen Tutta Stakes, a seven furlong turf sprint at Belmont for Kiran McLaughlin. She also finished third in the Pin Oak Valley View Stakes (G-3). She retired after that race with a 7-3-0-0-2 ($123,110) race record.

Most accomplished yearling in the $500K + price range: TO HONOR AND SERVE (G-1). 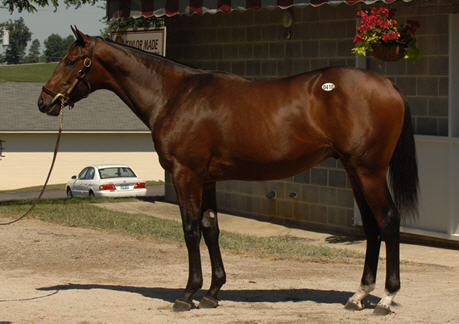 The most accomplished runner from this price group is TO HONOR AND SERVE (Bernardini – Pilfer, by Deputy Minster). Purchased by Live Oak Plantation for $575,000 and trained by Bill Mott, the colt has won multiple stakes races, including the Cigar Mile and Woodford Stakes, both Grade 1 events. Race record: 17-8-1-3 ($1,798,840). To Honor and Serve stands for $20,000 at Gainesway Farm and his first crop are yearlings of 2015. 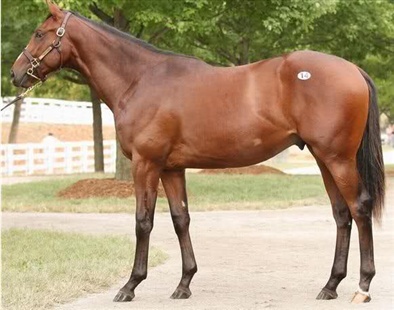 $900,000 - JIMMY CREED (Distorted Humor – Hookedonthefeelin, by Citidancer) is a full brother to stakes winner FUNNY FEELING and a half brother to multiple G-1 stakes winner PUSSYCAT DOLL. Their dam is also a G-1 winner.  A multiple stakes winning sprinter, Jimmy Creed captured his sole G-1 victory in the Malibu Stakes. He retired with a 10-4-2-2 ($439,250) record and entered stud at Spendthrift Farm in 2014 for $12,500. 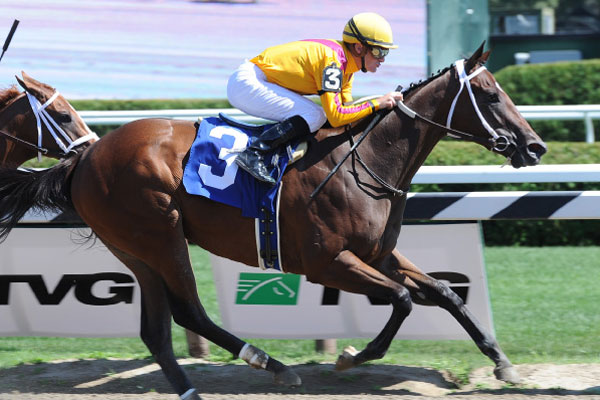 The most accomplished runner from this price group is MY MISS AURELIA (Smart Strike – My Miss Storm Cat, by Storm Cat) a $550.00 acquirement by Gorge Bolton. My Miss Aurelia was undefeated in her first five starts, but had her winning streak snapped when she finished second in the Breeders' Cup Juvenile Fillies. For her spectacular exploits, My Miss Aurelia was voted the 2011 Eclipse Champion Two Year Old Filly. Although she hit the board in four more starts, the gallant filly never visited the winners circle again and retired with a 11-6-2-3 ($2,547,000) race record. 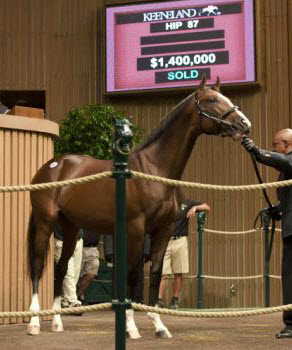 The sales topper at $1.4 million dollars was aptly named Powerful (A.P. Indy – Malka, by Deputy Minister).  Originally purchased and raced by Amerman, Evens, & Co, and trained by Neil Drysdale, Powerful finished off of the board in his first four starts.  After being gelded, Powerful won a maiden claiming race. He retired with a 13-2-0-0 ($31,234) record and sold at the 2014 KEEJAN horses of racing age sale for $20,000.  Ironically, Powerful’s younger full sister GOT LUCKY became a G-3 winner and placed in multiple G-2 races, earning $651,340.

Only one of the top ten most expensive yearlings earned blacktype.  Profetiza (A.P. Indy – Private Gift, by Unbridled) placed in the Catinca Stakes at Belmont and the restricted My Flag Stakes at Saratoga. She retired with a 9-2-2-2 ($119,672) record.

VIOLENCE (Medaglia d'Oro - Violent Beauty, by Gone West) was bought by Black Rock Stables, LLC for $600,000 and trained by Todd Pletcher. The brilliant but fragile colt won his first three outings, including the Nashua Stakes (G-2) and CashCall Futurity (G-1). He finished second in the Fountain of Youth (G-2) in his final start.  After a year of setbacks, Violence retired with a 4-3-1-0 ($623,000) record and stands at Hill 'n' Dale Farms for $15,000. His first foals are weanlings of 2015.

2012 – Seven of the top ten most expensive yearlings sold for $1 million dollars and up. Three earned blacktype. 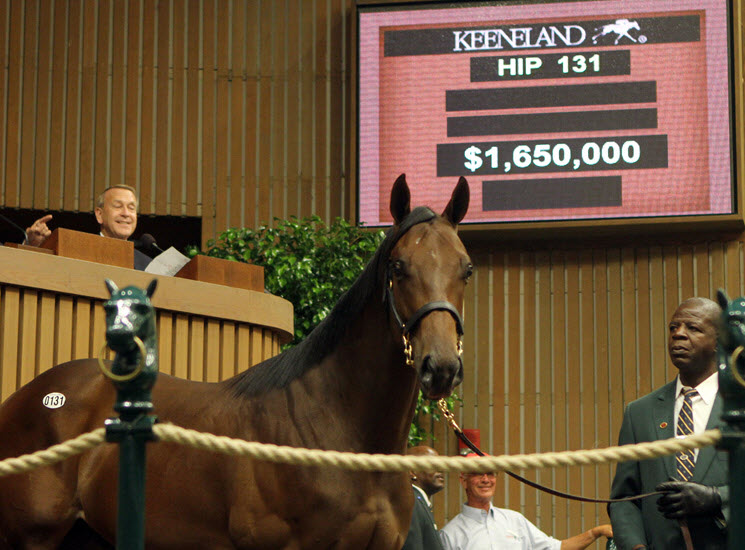 Topping the list at $1,650,000 was Heyaarat (Distorted Humor – Mushka, by Empire Maker). Owned by Shadwell Stable and trained by Kiaran P. McLaughlin, the first foal out of  the G-1 winner Mushka compiled a 9-2-1-2 ($109,974) record. He finished second in an Allowance Optional Claiming race at Saratoga on July 31 and is currently breezing at Saratoga.

LIAM'S MAP (Unbridled's Song - Miss Macy Sue, by Trippi) sold for $800,000. A late bloomer, the pretty gray colt didn’t make his initial start until he was three. Brought along slowly by trainer Todd Pletcher, Liam’s Map won three of his four starts last year for Teresa Viola Racing Stables. This year, the colt finished second in the Whitney and won the Woodward Stakes, both G-1 events. His current race record is 7-5-2-0 ($808,940) and he may contest either the 2015 Breeders’ Cup Classic or Dirt Mile.

2013 – The yearlings of 2013 are now three year olds.  A remarkable 18 yearlings sold for over $1 million dollars. Currently, only two of them have earned blacktype.

The sales topper at $2.5 million dollars was Treaty of Rome (War Front – Blading Gold Ring, by During). Owned by Magnier, Tabor & Smith and trained by Aidan O'Brien, Treaty of War finished third twice in three starts, one on turf and once on Polytrack. Still in training, the colt has accumulated £597 for his owners.

THE GREAT WAR (War Front – Guide, by Pulpit) checking in at an even $1 million dollars, joined Treaty of Rome in Ireland and raced for the same connections. The Claiborne Farm bred colt spent his two year old season in Ireland and England, where he won and placed in two stakes.  At the end of the year, he contested the Breeders’ Cup Juvenile and finished a good fourth place in his first dirt attempt. Staying in the U.S., The Great War has raced three times this year, winning the 96Rock Stakes at Turfway and more recently, finishing second in the Quick Call Stakes at Saratoga. The Great War counts G-1 sprinter ZENSATIONAL and multiple Derby hero DEPARTING in his second generation.

Iron Fist (Tapit - Successful Outlook, by Orientate) gathered interest to the tune of $1,550,000 million dollars. The half brother to Test (G-1) winner SWEET LULU was third in the Del Mar Futurity (G-1) and recently placed second in the Pennsylvania Derby behind Frosted, completing the stakes exacta for their sire.  So far, the pretty gray colt has earned $364,600 in eight starts.

CARPE DIEM (Giant's Causeway - Rebridled Dreams, by Unbridled's Song) WinStar Farm LLC and Stonestreet Stables own the $550,000 yearling purchase and he was trained by Todd Pletcher. Carpe Diem won the Claiborne Breeders' Futurity (G-1) at Keeneland and finished second in last year’s Breeders' Cup Juvenile. This year, he won the Tampa Bay Derby (G-2) and Blue Grass Stakes (G-1) before a tenth place finish in the Kentucky Derby.  He was retired in July due to a knee chip and will stand his first season at stud at WinStar Farm next year.  Race record: 6-4-1-0 ($1,519,800) 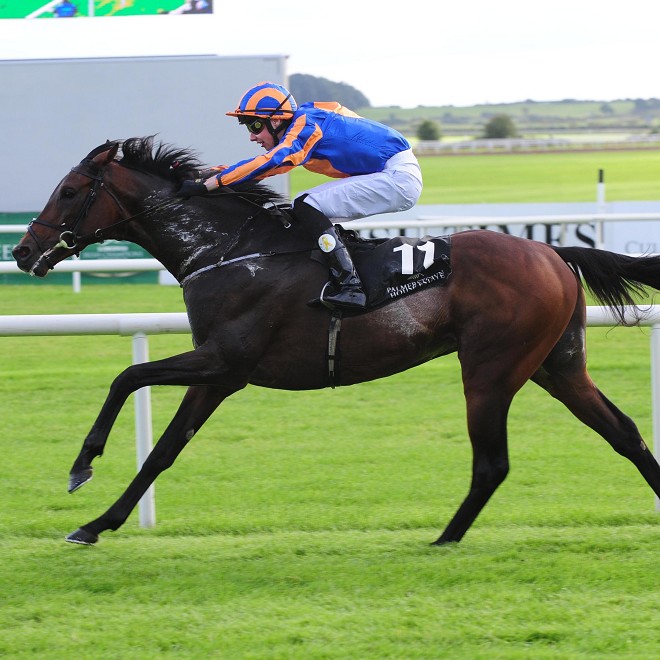 2014 – Last year’s sales remained strong, with 13 yearlings selling for $1 million dollars or more.  Some of the babies are emerging onto the track and have made just one or two starts. 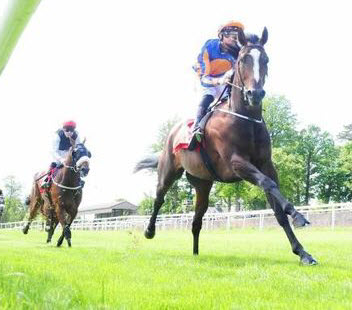 Leading the herd price wise as well as the most accomplished of the top twenty to date, was Air Vice Marshal (War Front – Gold Vault, by Arch) at $2.2 million dollars. The full brother to MOSLER sold to Tabor, Smith, Magnier & Allen and is trained by Aidan O'Brien. The colt has raced three times and hit the board in every start. In his last start, Air Vice Marshal placed second in the Superlative S. (Eng-G2) at Newmarket in July.

Records show that the typical stakes winner sells in the price range of $50,000 - $400,000. Three of the last five Kentucky Derby heroes, including Triple Crown Champ AMERICAN PHAROAH, passed through the sales ring as yearlings. American Pharoah was a buy-back at $300,000 at the Fasig-Tipton August Sale.  Animal Kingdom cost $100,000, while I'll Have Another sold for a paltry $11,000 at the Keeneland Yearling Sale.

There is less likelihood of earning back the purchase price or obtaining a stakes winner from the top echelon of the September yearling sales.  Armed with this information, horse players can use sales price to their advantage when handicapping an elite field of maidens. More expensive doesn't necessarily mean better.