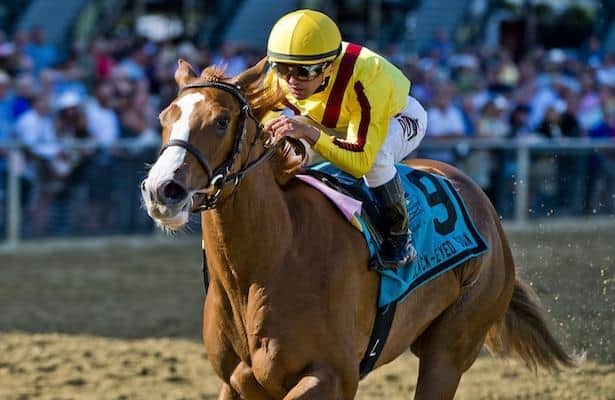 Keen Pauline lead every step of the way to steal the 2015 edition of the Black-Eyed Susan (G-2) at 1 1/8 miles over the Pimlico Dirt for three-year-old fillies.

Making the sixth start of her career, Keene Pauline was virtually ignored at odds of 15-1. She appeared outclassed, having been bested by almost nine lengths in her combined last three starts by optional claimers.

Piloted for the first time by jockey Javier Castellano, Keen Pauline broke sharply from the far outside post and found herself on the lead.  Castellano cleverly slowed the pace to a crawl, ticking off splits of :24.37 and :49.09  Gypsy Judy tracked a length back in second place, with Devine Aida on her outside in third, while Luminance settled, somewhat uncomfortably, on the rail in fourth, barely a length covering the four fillies. Sweetgrass, strongly restrained traveled on the heels of Luminance while Ahh Chocolate started to gear up on the outside.

As the fillies made their way around the far turn, Keen Pauline continued to lead the way, oblivious to the traffic jam behind her. After getting six furlongs in 1:13 flat and a mile in 1:37.85, Keen Pauline played catch me if you can down the lane, opening up by 2 ¾  lengths.

Meanwhile, the remainder of the field was bobbing up and down going nowhere fast. Include Betty made up over thirteen lengths from her customary place at the back of the pack to finish second, a half length in front of Ahh Chocolate, who edged out Danessa Deluxe for third by a neck.

Keene Pauline stopped the clock in 1:50.46. In capturing the Black-Eyed Susan, the chestnut filly earned her first graded stakes victory and second lifetime win. Despite the slow early fractions, Keen Pauline’s final time was the fastest since Royal Delta’s 1:49.60 time in 2011.

Javier Castellano stated after the race, “You have to take advantage when anything happens in a race. I didn’t expect to be on the lead. I saw a lot of speed in the race. I thought that Martin Garcia on (Luminance) had the speed and was going to dictate the pace. He broke OK and didn’t send his horse to the lead. My horse broke so well out of the gate I dictated the pace and I enjoyed the ride.”

Castellano earned the blanket of Black-Eyed Susans for the second straight year.  He won last year with Stopchargingmaria.

Roman’s Assistant Tammy Fox remarked about Keen Pauline, “Dale took his time with her in Florida. She had a couple of months off. She came back for the Keeneland race and it set her up perfect for this race here. Yesterday, when I galloped her over this surface, she loved it. She loved everything about it.”

Keen Pauline is the first blacktype earner for her unraced dam.  She hails from the same female family as 2010 English Champion Filly Hooray, plus the sires Souvenir Copy and Doneraile Court.  Her fourth dam is the blue hen Close Control.