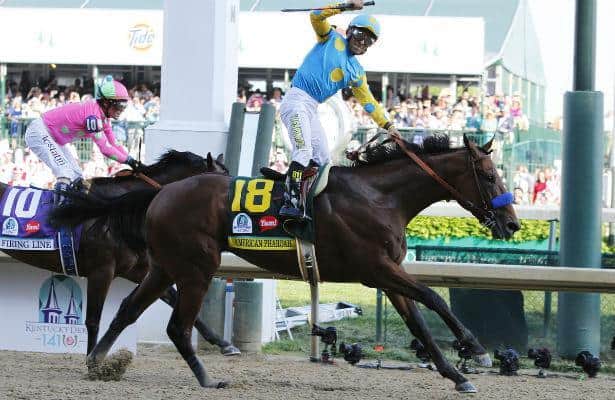 Summer racing at Saratoga, Del Mar, and Gulfstream Park is just around the corner. All three meets highlight the juvenile races as this year’s crop of two-year-olds take their first steps towards the Breeders’ Cup and ultimately, next year’s Triple Crown. The very early precocious types already have a start or two under their girth. Join Horse Racing Nation as we unveil the 2017 Kentucky Derby contenders and the 2017 Kentucky Oaks Contenders.

Horse Racing Nation is the only website in the world that offers up to the minute news and an ever expanding wiki of Thoroughbred racehorses.  You, our members, can add horses, update data, read and comment on the news, view race data and videos plus vote for your favorite runners.

The amount of data on the 2017 Kentucky Derby and Oaks lists is entirely dependent upon the Horse Racing Nation community. As part of this community, you can help expand the database by adding and voting for two-year-olds to the Wiki as you spot them. Learn how to use the Wiki. To vote for your favorites, click on the horse’s name and vote.  Horses will move up and down the power rankings as more members vote. Discover more about the Power Rankings and Voting.

This year’s herd of Freshmen Sires is all about the Classics. This year ushers in an unusual number of highly accomplished classic-winning stallions. They will get the occasional precocious winner, but the majority of their progeny will be mid-to-late season types and improve as three and four-year-olds. Don’t be surprised to see their babies making their own mark on next year’s Triple Crown trail.

The aforementioned Bodemeister leads the First Crop Sires by way of auction sales with a gross of $4,326,000 for twenty-four two year olds. He was also the most popular with the breeders and sired 131 foals in his first crop.

Not to be outdone, Union Rags was represented by twenty-six offspring at auction, which sold for a gross of $4,218,000. Union Rags is the sire of 106 two-year-olds. Two of his offspring have started and one, Lady Stardust, captured a 4 ½ furlong event at Aqueduct in April by 5 ½ lengths.

Keep an eye on the offspring of the very well-bred Empire Way (Empire Maker) at Del Mar this summer.  The young stallion is a full brother to Eclipse Award heroine Royal Delta.  He wasn’t as accomplished on the track as his famous sis, but he does own blacktype. Empire Way’s babies are off to a quick start. From only 21 foals, six have started, two are winners, and one has placed.

The two-year-old class of 2016 includes American Cleopatra, a full sister to Triple Crown Champ American Pharoah. Be on the lookout for full and half siblings to Songbird, Uncle Mo, Nyquist, Exaggerator, Cathryn Sophia, and Land Over Sea. Other well-bred two-year-olds claim relationships to Runhappy, Paynter, Into Mischief and his half sister Beholder, plus Creative Cause and his full brother Destin.

Below are a dozen promising two-year-olds to add to your virtual stable:

Silvertoni (Tapit - Somasach, by Johannesburg) is undefeated in two starts. She beat the boys (and girls) in the Kentucky Juvenile Stakes. Her family is filled with class. Silvertoni’s second dam is a half-sister to Two-Year-Old Champ Easy Goer.

Hey Mike (Cape Blanco (IRE) - Nina Fever, by Borrego) finished second in the Kentucky Juvenile Stakes. He set a new track record for 4 ½ furlongs in :51.36 in his Keeneland debut. Hey Mike is a half brother to Frizette (G1) heroine Nickname.

Stay Thirsty's first starter made his debut in the Kentucky Juvenile Stakes. Thirstforlife (Stay Thirsty - Promenade Girl, by Carson City)   was a step slow out of the gate, but he made up ground to finish third.  The Mark Casse trainee is a three-quarter brother to Grade 1 winner Cavorting (Bernardini).

Bode's Dream (Bodemeister - Frolic's Dream, by Smoke Glacken) scored in her debut to become the first winner for her sire. The Pletcher trainee zipped through quarters of 21.88 and 44.82 on her way to a 3 ¾ victory. Her time of 51.26 for 4 ½ furlongs was less than an eye blink off of the track record of 51.07. The pretty gray daughter of a Kentucky Derby/Preakness runner-up descends from a strong stakes winning Florida distaff line. She’s the second foal out of Forward Gal (G2) heroine Frolic’s Dream. Bode’s Dream’s female family includes the talented millionaires Smoke ‘N Frolic, Super Frolic, plus stakes veterans Linsey Frolic, Frolic’s Revenge, Fabulous Frolic, and, of course, Cherokee Frolic.

Capt. Grider (Astrology - Majestic Dy, by Dynaformer) made up five lengths from the ¼ pole to earn his debut victory by a head in a 4 ½ furlong baby race at Keeneland’s Spring Meet. The colt is surprisingly precocious, given his pedigree.  He’s a half-brother to the G2 router Al Qasr and multiple stakes winner Delicate Dynamite. Their dam is a multiple stakes winner over the lawn. Capt. Grider has recorded a string of consistent breezes at Keeneland.

Milton Freewater (Creative Cause - Lovehi, by Swiss Yodeler) is the first starter and winner for Creative Cause.  The speedy gray colt bested only three other juveniles, but he won his debut by a fighting nose.  The Patricia Harrington trainee set a new track record of 51.37 for 4 ½ furlongs at Los Alamitos in California. Milton Freewater shares the same female family as Breeders’ Cup Sprint hero Dancing in Silks.

Alpenhorn (Empire Way - Alpine Echo, by Swiss Yodeler) was a game second to Milton Freewater in her debut. It was over eight lengths back to the remaining two runners. She’s by the well-bred Freshmen sire who is a full brother to Royal Delta. Alpenhorn is a half to Swiss Minister, who placed in the Graduation Stakes at Del Mar as a juvenile.

Starstruck Kitten (Kitten's Joy - Celestial Woods, by Forestry) is a full brother to three stakes winners, including graded stakes winners Bobby’s Kitten and Camelot Kitten. Three of his four siblings won at age two. He hasn't posted any breezes yet.

Into the Breach (Creative Cause - Holy Bubbette, by Holy Bull) is a half-brother to Nashua (G2) and Holy Bull (G3) winner Cairo Prince. Into the Breach recorded three works at Palm Meadows in April.

Maximum Edge (Dialed In - Champagne Sparkle, by Street Boss) made her Florida Derby winning sire proud when she earned her maiden victory by a slender neck in a 4 ½ furlong maiden race at Churchill Downs. Conditioned by Bill Connelly, Maximum Edge is the first foal out of a full sister to Arkansas Derby hero and Kentucky Derby runner-up Danza.  Champagne Sparkle is also a half-sister to Santa Anita Gold Cup winner Majestic Harbor.

Greek Alphabet (Medaglia d'Oro - Afleeting Lady, by Afleet Alex) is the first foal out of a G2 winning half-sister to Preakness champ Shackleford. Greek Alphabet was an $875,000 yearling, and he is  trained by Kiaran McLaughlin for Godolphin Racing. Greek Alphabet has recorded current works at Greentree Training Center.Expect to see him debut this summer at Saratoga.

The month of May is the starting point for two-year-olds looking for those important blacktype earnings.  Hard to believe, but these new babies will be contending in the Breeders’ Cup Juvenile in six months.  It seems as if the stakes action for two-year-olds starts earlier every year. The Kentucky Juvenile Stakes was contested on May 5, three days before the Kentucky Derby.

On June 9 the two-year-old summer stakes season begins in earnest for most of the country.  At Belmont Park, the precocious types get an opportunity to show their class in the Astoria and Tremont on June 9 and 10 as a preview of the prestigious Saratoga meet.

Fourth of July weekend will showcase two-year-olds at Churchill Downs and Gulfstream Park. The Grade 3 Bashford Manor and Debutante will be held on July 2.  On the same day in Florida, the Summit of Speed includes two sprint stakes for two-year-olds aiming for the $2 Million Dollar Florida Sire Stakes series later in the year.

The California contingent gets to show their stuff in the Santa Anita Juvenile and Landaluce on July 9, a month ahead of Del Mar’s lucrative meet.

Follow these talented youngsters and get the latest news and developments on the two-year-old racing scene at Horse Racing Nation.