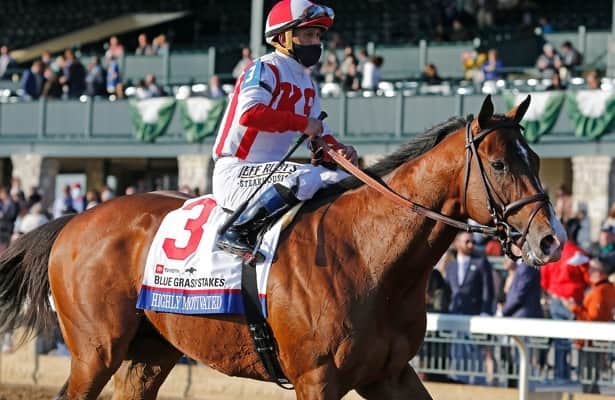 Highly Motivated is trained by Chad Brown. Although Klaravich Stables bred him, Highly Motivated went through the 2018 Keeneland November Breeding Stock Sale as a weanling because of Klaravich buying out a partner. The colt brought a bid of $240,000.

In the first start of his 3-year-old season, Highly Motivated bobbled at the Gotham (G3) start but put in a late bid to finish third, bested 1 3/4 lengths by Wyburn. Highly Motivated showed class last year when he set a stakes and track record in the 6 1/2-furlong Nyquist Stakes of 1:14.99. The track record had been 1:15.00.

Pedigree: Highly Motivated (Into Mischief - Strong Incentive, by Warrior's Reward) has a middle-distance pedigree, and he might find 10 furlongs too far in top company (See the Highly Motivated pedigree chart).

Into Mischief is consistently a top-five leading sire. Out of 60 graded/listed winners, three – Kentucky Derby (G1) winner Authentic, Super Derby (G2) winner Vicar’s in Trouble and Pan American (G2) turf router Bema’s Boy – are winners at 10 furlongs and farther. Besides Highly Motivated, Into Mischief is represented on the Kentucky Derby trail by Mandaloun. The stallion also is the sire of San Felipe (G2) hero Life Is Good, who we might see later this summer.

Highly Motivated is the second foal and first blacktype earner out of stakes winner Strong Incentive. His half-sister Dew Springs competes in Puerto Rico. They have a yearling half-sister by Flintshire (GB) and a new little sister by Practical Joke.

The lightly raced Strong Incentive campaigned for only her 3-year-old season. She was slow to catch on, finishing progressively better in three maiden starts. The lightbulb came on when she ran for a tag of $75,000, beating maiden claimers by a length over Saratoga’s inner turf course. After placing in a turf sprint allowance,  Strong Incentive won the Jammed Lovely Stakes at seven furlongs over Woodbine’s Polytrack for her finale.

There is minor blacktype earnings in Highly Motivated’s second generation. Strong Incentive’s half-brother Hall Pass (Freedom Child) placed in two sprint stakes at Laurel Park in his 30-race career. Their dam G G's Dolly (Comic Strip) won the six-furlong Prairie Rose Stakes at Prairie Meadows and was in the money in two other sprints, one at Fonner Park and the other at Canterbury Park. The hardy mare was in the money 14 of 21 starts. G G's Dolly is the only blacktype earner in the third generation of Highly Motivated’s female family.

Warrior’s Reward (Medaglia d'Oro) has the breeding and scope of a two-turn horse, but he didn’t want to run that far. His sole stakes win was a victory over Musket Man and Munnings in the seven-furlong Carter Handicap (G1). However, Warrior’s Reward placed second in the nine-furlong Jim Dandy (G2), as well as the Churchill Downs Stakes (G2) and Northern Dancer Stakes (G3), and he was third in the Dwyer (G2) and Phoenix Stakes (G3).

As a broodmare sire, Warrior’s Reward has 23 starters from 75 foals. Nineteen are winners, and four are stakes winners. Two are full sisters, Mom’s Red Lipstick and Charlie’s Penny, this year’s Silverbulletday Stakes winner.

Into Mischief has one other stakes winner out of a Warrior’s Reward mare, Mundaye Call, who won last year’s six-furlong Audubon Oaks at Ellis Park.