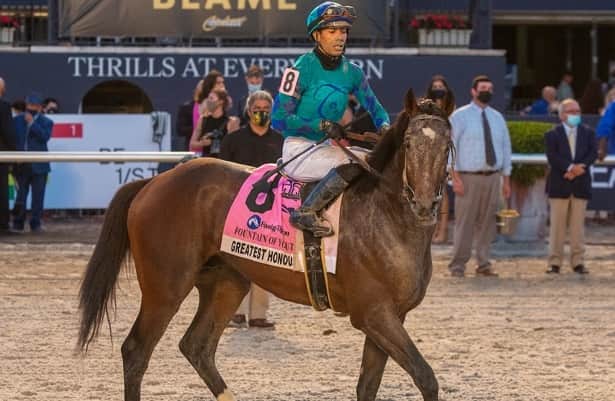 The Grade 1, $750,000 Florida Derby is the final leg of three Gulfstream Park preps for the 2021 Kentucky Derby. Greatest Honor attempts a rare sweep of the series, while 10 other hopefuls try to ruin his bid in the 1 1/8-mile event.

Laurie: Greatest Honour attempts a rare sweep of the Holy Bull Stakes, Fountain of Youth, and Florida Derby. The Holy Bull was previously named the Preview Stakes, which took the place of the Flamingo Stakes. The last horse to win all three Florida preps for the Kentucky Derby was Spectacular Bid in 1979.

There’s no “gotta have the lead” type in here unless Soup And Sandwich feels pressured and grills them. Nova Rags, Quantum Leap, Known Agenda, and Collaborate could mix it up near the front, while Greatest Honor lingers mid-pack or farther back.

I do not like how confident Jose Ortiz was in the Fountain of Youth, waiting until the last minute to unleash Greatest Honour. True, he was much the best, yet he could have easily lost if Drain the Clock had held on. Hopefully, we will not see that scenario here.

It is a toss-up for the lesser awards between Known Agenda, Collaborate, Quantum Leap, and possibly Nova Rags and Spielberg, if that one does not regress.

Ashley: No recent Derby hopeful has swept the Gulfstream preps, something that does not really bode well for morning-line favorite Greatest Honour. However, Greatest Honour checks all the boxes and truly is the one to beat.

Papetu even got the jump on him in the Fountain of Youth yet Greatest Honour simply swept past him, with Jose Ortiz wrapping him up before he had even passed Drain the Clock.

Spielberg has faced his stablemates and champion Essential Quality and will likely take home a check and some more Derby points.

Collaborate is the interesting new shooter, in my opinion. If he gets loose on the lead or even sits right off the pace setter, he could be incredibly dangerous.