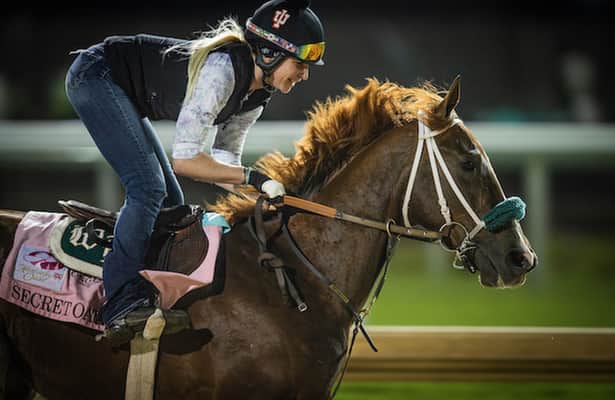 The $1,000,000, Grade 1 Cotillion Stakes at Parx on Saturday attracted a field of nine talented 3-year-old fillies in what likely will be their last shot against strictly their peers.

Despite the defect of Queen’s Plate winner Moira, the field is still loaded for bear. Heading the field is Kentucky Oaks heroine Secret Oath. With Nest not in the field, this could be the daughter of Arrogate’s time to shine again. Four other graded-stakes winners join her in the gate, along with several others who are graded-stakes placed.

Since 2000, only two fillies have completed the Cotillion/Breeders’ Cup Distaff double. In 2004, Ashado won both events along with the Eclipse Award for champion 3-year-old female. Ten years later, Untapable also completed the feat and earned year-end honors for her division.

With such a rich history at hand, Ashley Tamulonis of From Coast to Coast and Laurie Ross of Pedigree Power determine who will dance in the winner’s circle and who will be waiting to fill their dance card.

Ashley: There’s a good bit of speed in here.

You have Green Up and Adare Manor toward the rail, with Beach Daze and Gerrymander in mid-field and Shahama and Society drawn to the outside. This sets up well for Goddess of Fire and Secret Oath, who can tactically sit off that speed.

Green Up gets that coveted rail position, but my biggest concern is her final times. Granted, she’s won by open lengths, so that could simply be a matter of not doing anything more than necessary to get the win.

Adare Manor must answer the question of whether she wants longer than a mile. Gerrymander needs to start stringing together wins, and Secret Oath needs to prove that she hasn’t lost a step.

There’s a lot going on here, but it sets up for a stellar race. I may live to regret it, but I’m going to continue to stand behind my heart horse, Secret Oath.

Laurie: Race keys: The Cotillion is straightforward. Since 2010, the favorite has won or placed. Eight Cotillion heroines, including the last six, hit the top four spots in the Alabama Stakes.

Secret Oath is the class of the Cotillion and, unless she stubs a hoof, is our winner.