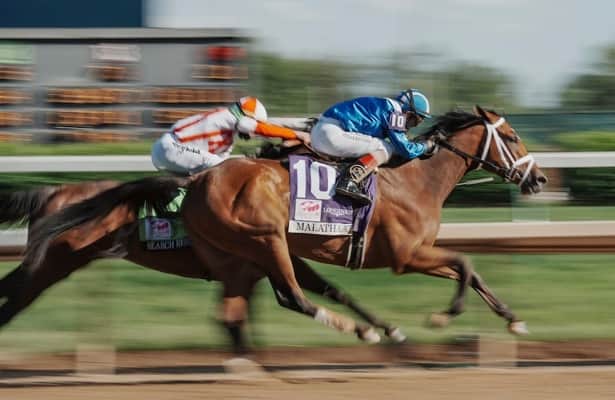 The Grade 1, $600,000 Alabama Stakes is a version of the Belmont Stakes for fillies. This might be the only time in their career that these 3-year-old fillies will stretch to 10 furlongs. The event is carded as race 10 Saturday at Saratoga, with a post time of 6:13 p.m. EDT.

With a 56 percent chance of rain later in the day, we handicapped the race for an off track.

Ashley: First things first, let’s discuss Malathaat. The Kentucky Oaks heroine has a history of just getting the win, much like the famed Zenyatta. However, Malathaat does not come from the back of the field. Typically she is setting the pace or closely pressing it. She had to work hard in her last two races; she held off Search Results in the Kentucky Oaks, but after being continuously pressed by Clairiere in the CCA Oaks, Malathaat was unable to hold off Maracuja. I think that will be the key here as well, especially since everyone is stretching out to 1 1/4 miles for the first time.

I expect Played Hard to go straight to the front. Left alone there, I think she could spring the upset and take them gate-to-wire. A case can be made for Crazy Beautiful, Clairiere and Maracuja. I can imagine that I will be virtually sent to the gallows, but I’m going to go big or go home.

Laurie:  The favorite has won or placed third in nine of the last 10 editions of the Alabama Stakes. Eight of the 10 winners prepped in the CCA Oaks.

Although I admire Ashley’s “Go big or go home” stance, and as much as it pains me to choose an even-money favorite on top, I see redemption for Malathaat. She’s the class of the field and has tactical speed. She can settle off Play Hard to her inside or farther back if necessary. While Played Hard might be lone speed, a few in here might push her early, and I don’t like her pedigree or trainer stats.

Crazy Beautiful might draft in behind Play Hard, with Clairiere, Maracuja and Army Wife in the mix, while Will's Secret will make a late run. Watch out for falling bridge jumpers!