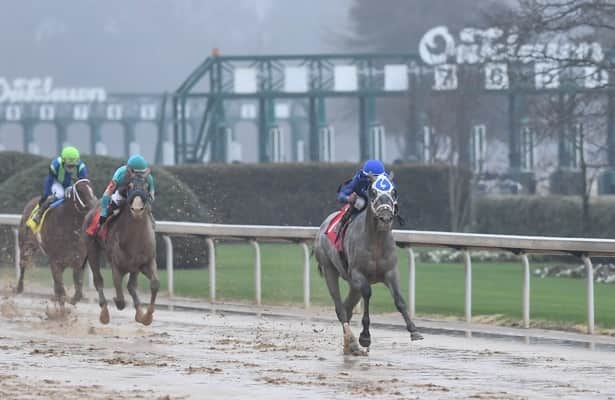 Last year’s 2-year-old champ Essential Quality remains perfect entering the second start of his 3-year-old campaign. He faces his toughest test yet, facing eight other competitors at 1 1/8 miles. Should he prevail, the pretty gray colt could be the early Derby favorite.

Ashley Tamulonis of Coast To Coast and I weed out the pretenders, but do we agree on the same contenders?

Ashley: This is a pretty unique Kentucky Derby prep field in that there is not one runner in the field that traditionally vies to set the pace. I foresee Essential Quality snagging the lead a la his Breeders’ Futurity (G1) effort. If he gets loose on the lead, he will be going, going, gone.

As for the others, their best bet is to not let Essential Quality put too much space between himself and the field since Keeneland has such a short stretch. Highly Motivated and Keepmeinmind both should be sharper for this race, and Highly Motivated owns the highest dirt speed rating in the field. Hidden Stash should make some noise as he has been consistent thus far in his career.

Laurie: Here is a key to the Blue Grass Stakes: excluding last year when the race was held in July, six of the last eight winners won the Blue Grass in their second start off the layoff. Of those, all but one lost their first start of the season, but most hit the board. No pacesetter has won in a dozen years. The preferred winning style is a presser or closer.