Greenpointcrusader Sparkles in the Champagne Stakes 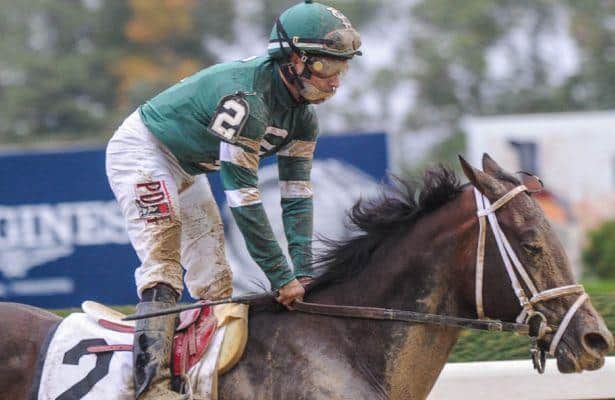 Greenpointcrusader splashed to a 4 ½ length victory under jockey Joe Bravo in the Grade 1 Champagne Stakes  over a sloppy Belmont track.

The son of Bernardini broke slowly, then gradually made his way up to fifth place, saving ground on the rail.  Up front, Tale of S’Avall, RALIS and SUNNY RIDGE fought on the lead through a first quarter in 23.59 and a half in 46.78. Slipping to the outside, Greenpointcrusader extended into a ground-eating stride and made a six wide move to breeze past a tired Sunny Ridge, TALE OF S'AVALL and Ralis.

Greenpointcrusader got the mile in 1:36.25 in a decisive 4 ½ length victory. Sunny Ridge was second by 2 ½ lengths. PORTFOLIO MANAGER put in a good late run to capture third a half length in front of SAIL AHOY. RAFTING was scratched.

After the race, Joe Bravo remarked, “This horse really didn't have the clearest of races in his first two starts. He's a big horse and he needs a clear shot. He recovered [from the break] so well and was so comfortable on the backside, he gave me confidence when we turned for home that he was going to kick. Dom did a great job bringing him around. The stride this big boy has, man, that was fun. The last sixteenth of a mile, I kind of geared him down. I didn't really want to get to the bottom of him.”

Bravo continued, “His next one is going to be sick. How great is this Breeders' Cup going to be this year? Every day is a blessing, that's all."

Bred by Oakbrook Farm, Greenpointcrusader was a $575K Keeneland September Sales yearling purchase and is owned by St. Elias Stable, MeB Racing Stables LLC &  Brooklyn Boyz Stables. The colt is trained by Dominick Schettino and has a 3-2-1-0 ($366,400) race record.

After having his photo taken in the winner’s circle, the trainer stated, "He [Greenpointcrusader] was training good up to the race. His first two races, even though he won, he had tight trips down inside. We talked about the track, being inside, I basically left it up to Joe. He got a little shuffled back at the break and the rest was up to Joe."

GREENPOINTCRUSADER (Bernardini - Ava Knowsthecode, by Cryptoclearance) became the latest stakes winner in a family filled with blacktype. He’s a full brother to Holy Bull SW and sire ALGORITHMS and a half to the MGSW warriors JUSTIN PHILLIP, SUCCESSFUL MISSION and KEYED ENTRY. A half sister, ALEX'S ALLURE, won the Senorita Stakes as a two year old.

Greenpointcrusader is bred to run two turns. The 5 ½ furlongs of his maiden debut was a bit short for the colt, but he put in a fantastic effort to finish second by a bare head to the ultra-game Saratoga Mischief. That one returned to place in the Saratoga Special. The Champagne Stakes hero won his maiden in his second start when he stretched out to seven furlongs. Greenpointcrusader earned a trip to the Breeders’ Cup Juvenile at Keeneland, as the Champagne Stakes is a Breeders’ Cup Challenge race.