Derby pedigrees: Why Essential Quality can outrun his breeding 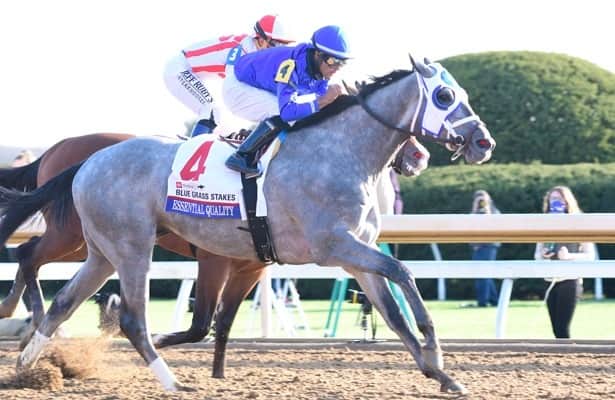 Essential Quality is undefeated in five career starts, including a runaway 4 1/4-length victory in the Southwest Stakes (G3) and a gutsy neck decision in the Blue Grass (G2) over Highly Motivated.

The Brad Cox trainee has earnings of $2,265,144 and races for the esteemed Godolphin stable, which also bred him.

Pedigree: Essential Quality (Tapit - Delightful Quality, by Elusive Quality) has a miler/middle-distance pedigree, although he may go farther because of his talent, tactical running style and training. He’s bred on the same Tapit/Elusive Quality cross as the listed winning turf sprinter Blind Ambition. (Click here for the Essential Quality pedigree chart).

Tapit is a consistent top five leading North American sire. Since 2014, three of his sons won the Belmont Stakes, and two others placed. Adding to his legacy, Tapit’s grandson Tiz the Law won last year’s Belmont.

Despite his leading sire status and classic-winning offspring. Tapit’s resume lacks a Kentucky Derby winner. The best finish was a third place finish by Tacitus in 2019.

Smarty Jones also captured the Southwest Stakes before winning the Kentucky Derby and Preakness as the overwhelming fan favorite. His sole career defeat was a one-length defeat at the hooves of Birdstone in the Belmont Stakes.

Others in the family include Grade 1 winning sprinter/miler Come Dancing (Malibu Moon), who set a new stakes record of 1:08.74 in this year’s Honorable Miss Handicap (G2) at Saratoga, plus Biddy Duke (Bayern), the recent heroine of the Senator Ken Maddy Stakes (G3) over the Santa Anita turf. Essential Quality’s third dam Jeano was a multiple Grade 3-winning sprinter.

Elusive Quality is the damsire of 88 graded/listed winners in North America. The bulk of his daughter’s offspring, led by two-time Eclipse Award-winning sprinter Roy H, are sprinter/milers, although three have won listed events at 1 1/8 miles.