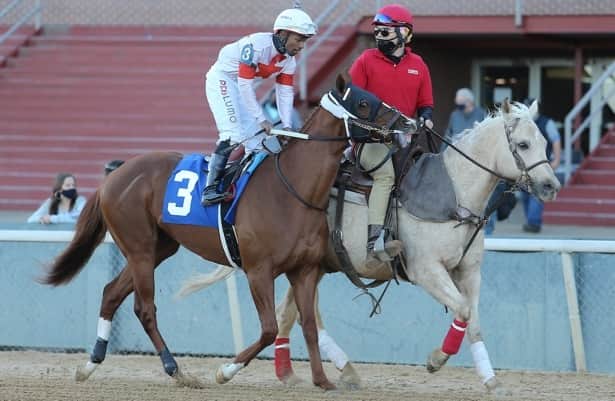 Cowan (Kantharos - Tempers Flair, by Smart Strike) put forth an excellent effort in the $1.5 million Saudi Derby. The Steve Asmussen trainee was left at the gate, breaking last in the one-turn mile event. He raced 10 lengths off the lead, went five wide on the turn and stormed down the long stretch, missing victory by a half-length. Cowan has a severe case of seconditis; the Saudi Derby was the fifth consecutive time he played the bridesmaid.

Cowan has an 8:1-5-1 ($665,877) record. He earned eight Kentucky Derby qualifying points for his finishes in the Remington Springboard Mile and Smarty Jones Stakes, both listed events. Cowan was his sire’s leading earner in 2020.

Bred by Hill 'n' Dale Equine Holdings, Cowan went through the sales ring twice; once as a Keeneland September Yearling, where he brought $185,000 from Bill & Corinne Heiligbrodt, and the following year, he didn’t meet his $385,000 reserve at the OBS March 2-year-old in training auction. The Heiligbrodts kept Cowan, and he races in their silks.

Pedigree: Cowan has a miler pedigree, and 1 1/16 miles might be as far as he’ll want to go. Although with closing running style, perhaps he can finish in the money at 1 1/8 miles with maturity and the right surface.  He’s proficient over dirt and turf. Often, horses can go farther over the lawn than on dirt. See pedigree chart.

Kantharos was brilliant but fragile. He won his trio of starts by a combined 28 1/2 lengths. After graduating at first asking by 11 3/4 lengths, Lion Heart's son returned in the 2010 Bashford Manor (G3). Despite stumbling at the break, Kantharos won by 9 1/2 lengths, which is still the largest winning margin in the race’s history. The Saratoga Special (G2) was the Steve Asmussen trainee’s final race, which he captured by 7 1/4 lengths.

Kantharos suffered a career-ending leg fracture during a morning gallop a few weeks later and retired to Ocala Stud in Florida. His brilliance didn’t end on the track. He earned Leading Sire honors by earnings in 2016, getting 26 winners and four stakes winners. It made the Kentucky folk sit up and take notice, and Kantharos earned his ticket to Hill ‘n’ Dale Farms, where he stands for $30,000.

Kantharos’ offspring are brilliant, are proficient on every surface and improve with maturity, but they are distance challenged.

Cowan is the second foal and first blacktype earner out of Tempers Flair, who just missed becoming a stakes winner by a nose in the Hatoof Stakes at 1 1/16 miles over the Arlington lawn. Smart Strike’s daughter won over dirt and turf from a mile to 1 1/16-miles and earned $70,130 in 13 starts. Barren in 2019, Tempers Flair foaled a Candy Ride filly in 2020.

Cowan gets his class from his third generation. His second dam, Cloudburst (Storm Cat), is a stakes-winning sprinter. Her half-brother is 1996 2-year-old champ Boston Harbor (Capote). This is also the family of 1987 champion sprinter Groovy.