Helium: A long-shot prep winner is one thing. But the Derby? 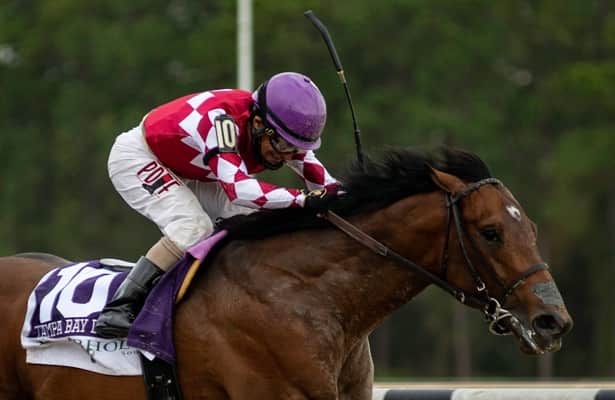 Helium (Ironicus - Thundering Emilia, by Thunder Gulch) is the first blacktype earner for his first-crop sire Ironicus, yet he is just one of his distaff line’s long list of stakes winners.

Helium’s Tampa Bay Derby (G2) victory was exciting and remarkable. The bay colt was off slow and traveled four to five wide throughout. After gaining the lead at the top of the stretch, the Mark Casse trainee had every right to be exhausted nearing the wire, yet Helium repelled Hidden Stash's desperate late bid by three-quarters of a length.

Helium’s triumph was remarkable in three ways: He was trying a new surface, stretching to two turns for the first time and returning off a 139-day layoff. Additionally, he traveled farther than the rest of the field in the 1 1/16-mile race. Helium’s final time was 1:43.55.

The Mark Casse-trained Helium is undefeated in three starts, and he has earnings of $287,763. Last year, Helium captured Canada’s Display Stakes by 4 1/4 lengths. He was bred by Teneri Farm Inc. and Bernardo Alvarez Calderon and sold for $55,000 at the 2019 Fasig-Tipton Kentucky Fall Yearling sale to Cool Hill Farm.

Helium is campaigned by D.J. Stable LLC, and he will be supplemented to the 2021 Kentucky Derby now that he owns 50 qualifying points. Casse said Helium will try to win the Kentucky Derby in just his second start of the season.

Pedigree: Helium has turf breeding top and bottom for turf yet has never raced on the surface. His pedigree indicates that nine furlongs may be at the top of his distance scope, yet training and other factors must be considered. See pedigree chart.

Ironicus, a Stuart S. Janney III homebred, was later-maturing. He was unplaced in his sole start as a 2-year-old and was brought along conservatively as a 3-year-old by Shug McGaughey.

Ironicus benefitted from the patient handling and as a 4-year-old won his first try in a stakes, the 2015 Dixie (G2) (later renamed the Dinner Party Stakes) at 1 1/16 miles over the Pimlico lawn. After missing by a neck in the one-mile Fourstardave Handicap (G2), Ironicus shined over Saratoga lawn, setting a course record of 1:38.54 for 1 1/16 miles in the Bernard Baruch (G2).

The following year, Ironicus captured the 1 1/8-mile Fort Marcy Stakes (G3) and was second in a pair of Grade 1 events: to champion Flintshire in the Manhattan Stakes and by a head to Miss Temple City in the Shadwell Turf Mile.

Ironicus, a well-bred son of Distorted Humor, is one of five graded winners out of A.P. Indy’s stakes-placed daughter Meghan’s Joy. His half-siblings were proficient on dirt and turf from a mile to 12 furlongs. His half-sisters On Leave (War Front) and Quiet Harbor (Silver Deputy) won graded stakes on the lawn between a mile to 1 1/16 miles. Half-brother Hunting (Coronado’s Quest) won a Grade 3 at nine furlongs, and Norumbega (Tiznow) won the Brooklyn (G2) at 12 furlongs.

Ironicus retired to Claiborne Farm in 2017 with a 15: 6-6-1 record and $1,148,790 in earnings. He stands for $5,000, and his first crop are 3-year-olds. The gray stallion is off to a slow start at stud, with only three winners from 10 starters, yet given the stallion’s later-maturing inclinations, this isn’t surprising. Helium is his sire’s first black-type earner.

Thundering Emilia started her racing career in Peru, capturing a six-furlong sprint stake and placing at about 10 furlongs in the Group 1 Clasico Pamplona over the lawn during her three-year stint in the country. After shipping to the U.S., the Teneri Farms homebred won the John W. Rooney Memorial at 1 1/16 miles on the Delaware lawn and placed in two other listed stakes. Although unsuccessful at the graded level, Thundering Emilia retired with a 33: 7-8-3 record and $140,963 in earnings.

Thundering Emilia is quickly making her mark as a broodmare. All four foals of racing age own blacktype. Besides Helium, the mare bore Emilia’s Moon (Malibu Moon), a Group 1 winning miler in Peru; Mighty Scarlett, who was third in the 2018 Wonder Again (G3) at nine furlongs; and King Daddy (Scat Daddy), who is multiple stakes-placed in Venezuela and Peru but has yet to find his stride in the U.S. Thundering Emilia’s other offspring include Thunder Stride, a 2-year-old son of Classic Empire, and a yearling son of Accelerate.

Helium’s distaff line back three generations all competed in South America. His second dam Saint Emilia (PER) (Saint Ballado), is a multiple stakes-winning dirt sprinter, and her full brother Domingo is a Champion miler in Peru. Four of Saint Emilia’s daughters are blacktype producers, with most of their offspring competing in South America. However, one has a multiple-stakes-placed Irish turf router, and another, Valiant Emma, is stakes-placed at Santa Anita.

In the U.S. and Canada, Thunder Gulch’s damsire progeny are strongest between eight and nine furlongs, with one representative at classic distances. His daughters’ European progeny have no distance limitations over the lawn. His daughters’ most accomplished foals include 2014 Breeders' Cup Classic winner Bayern, 2015 Kentucky Oaks heroine Lovely Maria and multiple Grade 1 winner Mshawish.