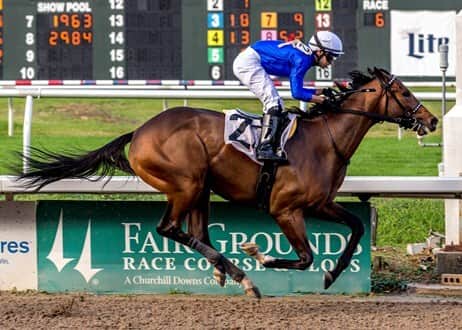 In his 3-year-old debut, Godolphin homebred Proxy (Tapit - Panty Raid, by Include) finished a close second in the Grade 3 Lecomte Stakes, beaten a length by Midnight Bourbon. Proxy was again second in the Risen Star (G2) to Mandaloun, who he beat in the Lecomte. The trio have taken turns beating each other at the Fair Grounds.

Pedigree: Proxy is bred to handle middle to classic distances and be proficient over various surfaces. See pedigree chart. 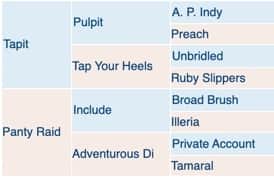 Tapit is consistently a top-10 leading North American sire. His progeny have no distance/surface limitations. None of his sons have won the Kentucky Derby or Preakness, but three have captured the Belmont Stakes. Other sons of Tapit on the Triple Crown trail include Holy Bull (G3) winner Greatest Hounor and last year’s 2-year-old champion Essential Quality.

Proxy is the eighth foal out of multiple Grade 1 winner Panty Raid. The daughter of Include captured the 10-furlong American Oaks Invitational (G1) on turf and the Spinster (G1) on Polytrack and the Black-Eyed Susan Stakes (G2) on dirt, both at nine furlongs. The Todd Pletcher trainee earned $1,052,380 in 10 starts.

Out of eight foals, five of Panty Raid’s babies have started, and four are winners. Proxy’s half-sister Micheline (Bernardini), also conditioned by Michael Stidham, does her best work on the lawn. She captured a pair of listed events, the Honey Ryder Stakes at a mile and 1/16th at Gulfstream Park and the 1 5/16-mile Dueling Grounds Oaks. She also placed in the Queen Elizabeth II (G1). Currently, Proxy is Panty Raid’s last foal. Her 2019 foal died, and she was not covered for 2020.

Panty Raid’s full sister, St. John's River, won the Delaware Oaks (G2) placed in the Kentucky Oaks, and three other stakes from a mile and 1/16th to a mile and an eighth. Panty Raid’s half-brother Franc is a listed winner in France.

The bloodlines of Proxy’s damsire Include, and second damsire Private Account, are quickly fading from North America.

Include, a son of leading sire Broad Brush, is the sole major stallion descending from the male line of the "black whirlwind"  Domino. Domino sired only 19 foals, yet his influence continues through today. He is found in the pedigrees of Mr. Prospector, Dr. Fager, Bold Reason, Holy Bull, Unbridled, Princess Rooney, to name a few.

Private Account, a son of legendary Damascus, traces back to Teddy, a leading sire in France for many years. Teddy is a cornerstone in North American pedigrees through his most famous daughter, the foundation mare La Troienne, plus sons Bull Dog – whose descendants include Mr. Prospector, Citation, Iron Liege, Coaltown, Hill Gail, Tim Tam, Alydar, and Ruffian – and Sir Gallahad III, the sire of Triple Crown winner Gallant Fox and many more.