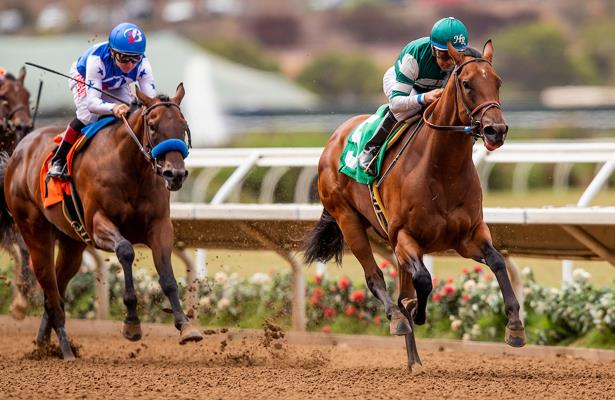 Last weekend’s winning 2-year-olds from Del Mar includes Collusion Illusion, victor of a strong Best Pal Stakes (G2), plus an expensive winner from the first crop of The Big Beast. For some, this is the Breeders’ Cup Juvenile and Juvenile Turf starting point. Let's meet them...

Pedigree:  Collusion Illusion has the pedigree and conformation to handle middle distances. Twirling Candy gets winners at all distances, although the bulk of his offspring are best as sprinter/milers. Collusion Illusion is the first stakes winner for First Dude as a damsire. As a sire, First Dude is represented by only eight listed or graded stakes winners. Two have won beyond 1 1/16 miles. The bay Collusion Illusion is the first foal out of an unraced half-sister to three stakes winners: multiple graded stakes-winning sprinters Bahamian Squall and Apriority, plus listed wining sprinter Squall City. She bore Big Tiz, second in the Hollywood Starlet (G1); Miss Preakness winner Vindy City; and multiple stakes-placed turf sprinter Lady Chance.

The John Sadler trainee flashed surprising precocity last Wednesday by winning his five-furlong turf debut. He signaled his readiness with a flashy second-to-last gate breeze, which was the best of 10. He could be an intriguing prospect for the Breeders’ Cup Juvenile Turf.

Pedigree: Encoder has the pedigree to run all day. English Channel’s babies rarely win five-furlong sprint debuts in August, so pay attention to this guy. There’s class throughout his second generation. Although only one of his dam’s half-sisters owns blacktype, they are strong producers. The second generation of Encoder’s distaff line includes 2009 Kentucky Derby shocker Mine That Bird, his half-brother Pacific Classic hero Dullahan and Shoemaker Miler winner Bolo.

In her Sunday debut, this Sadler trainee lived up to her $850,000 OBS March Auction price tag when she bested a classy group of seven other fillies. The field included America’s Surprise, a half-sister to Champion Songbird; Superstition, a full sister to Grade-3 winner Gloryzapper; K P Dreamin, who is out of a full sister to multi-millionaire Go Between; and Bast, who hails from the family of Grade-1 winner Falt.

Pedigree: Inspiressa sports sprinter breeding. She’s a daughter of first crop sire The Big Beast, who captured the 2014 King’s Bishop and paced in the Forego (G1) and  Alfred G. Vanderbilt Handicap (G1). All of Inspiressa’s six half-siblings are winners, although none own blacktype. Her dam, Lucky Trip, is a full sister to two stakes-winning sprinters: multiple stakes winner Dream Of Angels and Candrea, who also placed in the Oak Leaf (G1). Lucky Trip’s half-brother, Good to Be Seen, was stakes-placed as a juvenile. Inspiressa’s second dam, Burn Brightly, is also a stakes-winning sprinter.

The Richard Baltas conditioned Savvy Girl won her debut on Sunday, getting a mile on the lawn in 1:37.28, with split times of  25.51, 24.76, 11.66 and 12.07. Aaron Gryder positioned the bay filly to stalk the pace on the outside. They took over in the stretch and held off the late charge of Text Dont Call. The field included runners from the first crops of Summer Front, Lea, and Wicked Strong.

Pedigree:  Savvy Gal has a miler’s pedigree, but may handle 1 1/8 miles with maturity. She’s a first foal. Her dam is a full sister to Banner Bill, winner of a pair of Canadian sprint stakes for 2-year-olds. Bellarada is also a half-sister to stakes-winning sprinter Zulu, who placed in the 2016 Fountain of Youth Stakes (G2) and a year later, the Skip Away Stakes (G3). Bellarada’s half-sister, Third Chance, is a multiple stakes-winning sprinter who earned close to $500,000 in 19 starts.