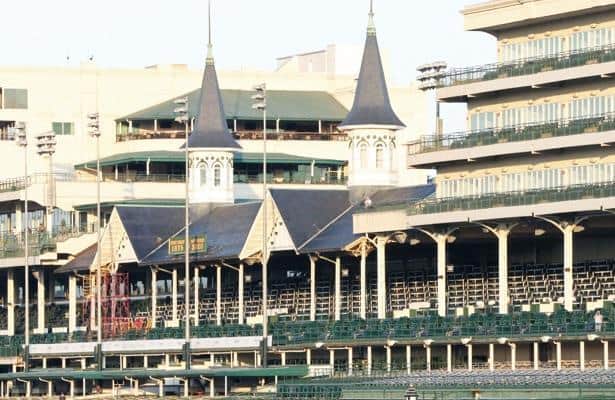 Mama Rina. The class of the field, Mama Rina finished a distant second at long odds in the Pocahontas Stakes (G3). However, she was not up to Grade 1 competition in the Alcibiades in her most recent start, finishing a distant fourth, beaten 5 3/4 lengths. The Ken McPeek trainee has three starts at 1 1/16 miles under her girth, and the drop in class could result in a visit to the winner's circle. Win contender.

Sandstone. In her second start over a sloppy Churchill track, Sandstone put away the pacesetter and turned back all changers on her way to a nine-length score in a one-mile maiden event. The Ken McPeek trainee was timed in 1:37.43 and got her final furlong in a good 12.47 seconds while under a hand ride. Win contender.

Yuugiri. She has speed to spare, and Yuugiri could run them off their feet if she can carry that speed around two turns. In her Churchill debut, the Rudy Brisset trainee chased an opening quarter of 21.32 before taking over and getting the half-mile in 44.91. She opened up under a hand ride, got five-furlongs in 56.92, and galloped under the wire 7 1/4 lengths in front in a sparkling 1:09.55, just two seconds off the track record of 1:07.55 set by Indian Chant in 2007. Win contender.

Pedigree: Yuugiri (Shackleford - Yuzuru, by Medaglia d'Oro) has a miler pedigree and could be proficient over multiple surfaces. The blacktype in her distaff line is international, although her dam won the turf mile Forever Together Stakes at Delaware. Yuzuru's half-sister bore three Japanese stakes winners. Multiple Japanese and French group winners make up the bulk of the third generation of this family, except for Grade 1 winning turf horse Sligo Bay. Yuugiri's fourth dam is the Rene-de-Course, Ballade, Dam of champions Devil's Bag, Glorious Song, and the prominent sire Saint Ballado.

Dressed. In her last start, her graded stakes hopes were dashed in the Jessamine (G2), so Wayne Catalano gives Dressed a chance to see if she'll take to dirt after winning over Polytrack and turf. Dressed ran a powerful race in the Jessamine, wide the entire way and finishing with a rush, just 1 1/2 lengths behind the winner. Florent Geroux is seeking his fourth victory in five years, and he'll be sure to keep Dressed clear of kickback. Wild-card chance.

Pedigree: Dressed (More Than Ready - Almada, by Lonhro (AUS)) has turf breeding throughout her pedigree. Her dam is a half-sister to Maqsad, a ten-furlong listed winner in Great Britain. Dressed's third dam Aquarelliste is a three-time Group 1 winner in France, and she placed second in the Arc de Triomphe (G1) and Hong Kong Vase (G1).

Manasota Sunset. She seeks a return to the winner's circle after finishing a distant third in the Ellis Park Debutante and second, bested 2 1/4 lengths in a one-mile $80,000 Optional Claiming race at Keeneland. Unfortunately, the Joe Sharp trainee has her work cut out for her, and Minnesota Sunset has not shown the class or speed to run with this group. Toss.

Pedigree: Manasota Sunset (Outwork - Highestmaintenance, by Macho Uno) has a miler pedigree. Second-crop sire Outwork's babies are best as sprinter-milers. Highestmaintenance is a stakes-placed sprinter, and her dam Half Heaven is a multiple stakes-winning miler who earned $435,526 in 29 starts.

Only one favorite has won, and one finished third in the Rags to Riches since the race's inception. Six winners made two or three previous starts, and pacesetters and pressers won the majority of the time, although closers prevailed from 2014 to 2016.

Sandstone fits the winning profile. She's made two starts, won her last start, and has a setting/pressing running style. Add the high percentage combo of McPeek and jockey Brian Hernandez Jr., and we have a strong case.

Mama Rina and Dressed also have excellent chances to win. Yuugiri could be something special, but she may regress slightly from that huge victory.