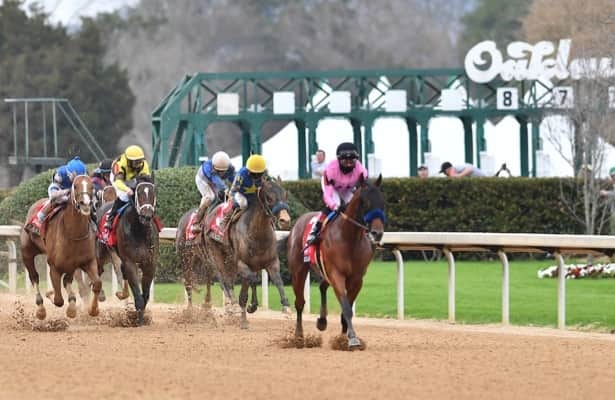 Photo: Ted McClenning/Eclipse Sportswire
Check out Pedigree Reports on Horse Racing Nation
Concert Tour rocked his way to a 4 1/4-length performance in Saturday’s Grade 2 Rebel Stakes at Oaklawn Park, going the 1 1/16 miles in 1:43.18. The Bob Baffert trainee was never seriously pressured at any point and dominated his rivals under a hand ride.

Concert Tour races as a homebred for Gary and Mary West. The bay colt is undefeated in a trio of starts with earnings of $756,600. He owns 50 Kentucky Derby qualifying points, putting him in fourth place on the leaderboard.

An interesting fact about Baffert’s record in the Rebel is that he has won the race in three-year cycles. The first cycle was 2010-12, and again 2014-16. He is working on another, since Nadal won the Rebel in front-running style last year for Baffert.

Of his first seven Rebel winners two continued to win the Arkansas Derby (G1), and two made it into the Kentucky Derby starting gate. American Pharoah swept the 2015 Triple Crown after Lookin At Lucky finished an unlucky sixth but redeemed himself with a victory in the 2010 Preakness.

Concert Tour (Street Sense - Purse Strings, by Tapit) has a solid nine-furlong pedigree. His conformation, tactical speed and training could take him farther. (Click here to see his pedigree chart).

Street Sense, a son of Street Cry, was the first Breeders’ Cup Juvenile hero to win the Kentucky Derby. The established stallion has 55 graded and listed winners in North America. His progeny’s sweet spot is between eight and nine furlongs, but Street Sense’s turf runners in Great Britain and Australia have won at classic distances.

Street Sense’s most accomplished offspring include McKinzie, who won the 2019 Whitney (G1) and finished second in that year’s Breeders’ Cup Classic. His daughters Sweet Reason and Wedding Toast are Grade 1 winners at nine furlongs. Street Sense’s son, the talented Maxfield, was a winner in 5 of 6 starts. Maxfield recently was a gaining third in the Santa Anita Handicap (G1), his only defeat.

Concert Tour is the second foal and first winner out of Purse Strings. He has an unnamed yearling half-brother by Lookin at Lucky. Purse Strings hit the board in 9 of 12 starts but did not graduate until her 12th and most rcent start, winning a six-furlong event by a desperate neck.

Class is known to skip a generation in Thoroughbred bloodlines. That is the case with Concert Tour. The second generation of his female family is void of black-type earners. His second dam My Red Porsche (Mt. Livermore) never got out of first gear, hitting the board once in seven attempts.

However, My Red Porsche’s half-sister My White Corvette (Tarr Road) was a stakes-winning sprinter, and she placed in the Golden Rod (G2) and Honeybee (G3) at 1 1/16 miles. She is better known as the dam of 2008 champion 2-year-old filly Stardom Bound (Tapit), who won the Santa Anita Oaks (G1) and Las Virgenes (G1) the following year.

A couple Stardom Bound half-sisters bore black-type runners. Mylittledeucecoupe (Lion Heart) gave us the precocious Myhotrodlincoln (Verrazano), who placed in the Kentucky Juvenile Stakes and Zia Park Juvenile at 2 and an overnight sprint as a 3-year-old. Scandalous Song (Unbridled’s Song) bore Zanesville (Tiznow), multiple stakes-placed at a mile and 1 1/16 miles.

Tapit is an established stallion whose sons are continuing his legacy as a sire. Tapit also is making his mark as a broodmare sire. Currently, he is ranked 12th on the leading broodmare leaderboard by earnings and 17th by winners. So far none of his daughters’ offspring have won beyond nine furlongs, but he is still young in terms of broodmare-sire status, so this could be rectified in coming years.