Pedigrees: Here are 4 fillies that could be in the Kentucky Oaks 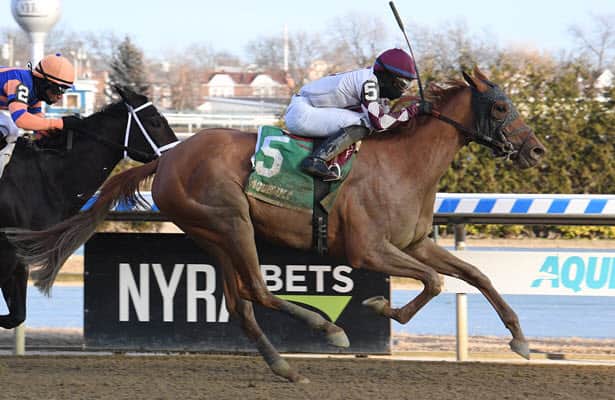 Here's a closer look at their bloodlines in this latest rundown of emerging 3-year-old fillies.

The Grass Is Blue

The Grass Is Blue wasn’t a happy traveler for much of the Busanda Stakes. She was pushed out around the clubhouse turn; then, when Manny Franco tucked her in behind the pace, she didn’t want to settle down. It didn’t matter because once in the clear, the Chad Brown trainee opened up to win the 1 1/8-mile race by a length. The filly earned 10 Kentucky Oaks qualifying points. She was bred by Phillips Racing Partnership and sold at the Keeneland September sale for a bargain $20,000. Louis Lazzinnaro campaigns The Grass Is Blue.

Pedigree: The Grass Is Blue is proven at nine furlongs. She has turf attributes in her pedigree, so that could be a future option. (Click here for pedigree chart.)

The Grass Is Blue is the fifth foal and first black type earner out of the stakes-winning turf miler Shine Softly. She has an unnamed 2-year-old half-brother by Dialed In and a yearling half-brother by Bolt d’Oro.

Shadwell Stable homebred Zaajel remained perfect in two starts when she captured the Forward Gal Stakes (G3) by 1 1/4 lengths. The Todd Pletcher trainee added her name to the Kentucky Oaks fillies list and has 10 qualifying points.

Zaajel is the fourth foal and second black type earner out of the multiple stakes-placed sprinter Asiya. Her half-brother Ajaaweed (Curlin) placed in the 2019 Remsen (G2) and in last year’s Sam F. Davis Stakes (G3).

Zaajel’s damsire Daaher, despite being a son of Awesome Again, favors his sprint-orientated distaff side. He’s sired only one stakes winner beyond a mile. He’s a young broodmare sire, with only a couple of stakes winners.

The Street Sense/Daaher bloodline cross has produced four winners from four starters, and one stakes winner.

Will’s Secret is out. The filly stepped up to the listed ranks and pulled away by 5 1/4 lengths in the Martha Washington Stakes. The Dallas Stewart trainee covered a mile over a muddy (sealed) track in 1:38.78. The Willis Horton homebred had been knocking on the door last fall and put it all together with a 2 3/4-length maiden victory in December. The filly has a 5: 2-0-2 record for $163,300 and 10 Kentucky Oaks qualifying points.

Pedigree: Will’s Secret has the pedigree and conformation to handle a middle to classic distances. She has a fluid stride with no paddling. She has turf attributes in her pedigree, so that could be a future option. (Click here for pedigree chart.)

Will Take Charge earned 2013 Champion 3-Year-Old Colt honors. The big, flashy Chestnut son of Unbridled's Song competed through his four-year-old season at the highest levels. So far, his progeny aren’t producing as many black type wins as expected. His first crop are 4-year-olds, and Will Take Charge has sired six stakes winners. None have been successful beyond 1 1/16 miles.

Will’s Secret is the first foal out of Girls Secret, a maiden winner at 1 1/16 miles over the lawn. The mare hit the board in four of seven starts but never visited the winner’s circle after her initial victory. Will’s Secret has an unnamed 2-year-old full brother and a yearling Hard Spun half-brother.

Only one of Girls Secret’s half-siblings made it to the track, and that one was unplaced. Their dam Well Monied (Maria's Mon) captured the Honeymoon Handicap (G2) at nine furlongs over the Hollywood Park turf. She placed in the Del Mar Oaks and American Oaks Invitational, both Grade 1 events.

Well Monied is a half-sister to three sprinter/milers. Half-brother Jimmy Simms (Lost Soldier) was a multiple stakes-winning miler over dirt and turf. Economic Model (Flatter) won the Hals Hope (G3) and hit the board in a number of graded stakes, including the King's Bishop (G1). His full sister Your Love won the Shine Again stakes and placed in the Safely Kept and Gallant Bloom Handicap (G2).

Charlie's Penny continued her win/lose cycle with an easy 3 1/4-length victory in the listed Silverbulletday Stakes. The Chris M. Block trainee earned 10 Kentucky Oaks qualifying points. She previously finished third in the Letellier Memorial Stakes after winning an Allowance Optional Claiming at Churchill. The Lothenbach Stables homebred has a 5: 3-0-1 record with $173,890 in earnings.

Pedigree: Charlie's Penny has a miler to middle distance pedigree. She paddles with her right fore. She switched leads near the wire after clearing the Silverbulletday field. (Click here for pedigree chart.)

Race Day was a solid Grade 2 and Grade 3 handicap horse. The Todd Pletcher trainee captured a pair of Handicaps at Oaklawn, the Razorback (G2) and Oaklawn (G2). The son of Tapit also set a track record of 1:47.90 for nine furlongs in the Fayette Stakes (G2). Race Day compiled a 12-6-1-2 ($748,000) record. He retired to Spendthrift Farm for the 2016 breeding season but was sold to South Korea this year.

The pretty gray stallion sired 53 winners from 96 starters and has five stakes winners and a stakes-placed runner. Not bad for a stallion whose first crop are now 4-year-olds. His stakes-winning progeny are all sprinter/milers.

Charlie's Penny is the second foal out of the unraced mare Sweet Lorraine. Her full sister, sprinter Mom's Red Lipstick, won the 2019 Arlington-Washington Lassie and placed in the Glorious Song Stakes. Sweet Lorraine has a 2-year-old unnamed filly by Munnings.