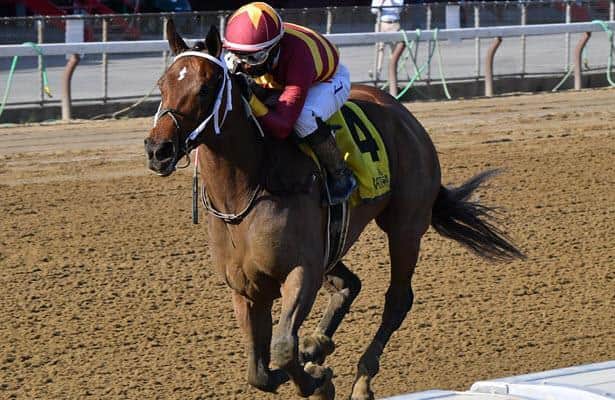 The 2-year-olds of 2020 have quietly appeared across the country while racing fans are focusing on the Kentucky Derby and Oaks scene. Three stakes-winning 2-year-old fillies deserve a closer look and are names to know heading to the Breeders’ Cup.

(Tapit - Pension, by Seeking the Gold)

Thoughtfully proved to be too much for her competitors in the Grade 2 Adirondack Stakes. She settled between the horses and behind the pace in the early going. Ricardo Santana Jr. tipped her out around the turn and Thoughtfully glided past the competition to win by five lengths. The Steve Asmussen trainee traveled 6 1/2 furlongs in 1:17.20 over Saratoga’s main track. Thoughtfully dominated by 8 1/2 lengths in her debut. A $950,000 Fasig-Tipton acquisition by Heider Family Stables, Thoughtfully is undefeated in two starts and has earned $127,564.

Pedigree: Thoughtfully is one of the most well-bred fillies in this year’s 2-year-old crop. She has middle distance/classic breeding and may handle multiple surfaces, especially turf.

Tapit needs no introduction as one of the most accomplished sires of his generation. He was the leading sire in North America from 2014 to 2016.

Thoughtfully is the fourth blacktype earner out of Pension. The Phipps Family-bred mare won only once in seven attempts, but what she lacked on the track she’s making up for in the breeding shed. Her son Annual Report (Harlan’s Holiday) captured the 2014 Belmont Futurity (G2). Her son Giant Payday (Giant’s Causeway) is a multiple stakes-winning turf miler, and his full sister Flores Island is multiple stakes-placed from seven to nine furlongs. After skipping the 2019 breeding season, Pension bore a pretty gray full brother to Thoughtfully this year.

The royally bred Seeking the Gold, an Ogden Phipps homebred, is one of the best broodmare sires of the last 20 years. He’s been a top-20 fixture on the leading broodmare sire list by earnings for the last 13 years. His daughters have produced 142 graded/listed winners in the U.S. and Canada. Champions Point of Entry, Blame, Surfside, and Take Charge Brandi are among the highlights found on his broodmare record.

After dominating in her debut by seven lengths, My Girl Red proved to be no match in the Sorrento Stakes (G2). She was never threatened while opening up to win by 4 3/4 lengths over Del Mar’s main track. The Keith Desormeaux trainee was timed in 1:12.12 for six furlongs. Undefeated in two starts, Texas Red has earned $120,000. The filly failed to meet her $70,000 reserve at the OBS October Yearling Auction, and races in the silks of her breeder, Erich Brehm.

Pedigree: My Girl Red physically resembles her sire. She has a miler/middle-distance pedigree, and the leggy filly has a long, smooth stride.

Texas Red, a son of Afleet Alex, is best known for his upset in the 2014 Breeders’ Cup Juvenile over Carpe Diem. He returned as a 3-year-old with a second-place finish in the San Vicente Stakes (G2) but skipped the Kentucky Derby trail with a foot abscess. He returned in the summer with a runner-up finish in the Dwyer, which set him up for a half-length victory in the Jim Dandy (G2) over three rivals, including Frosted. Texas Red’s final track appearance was a fifth-place finish in the Travers Stakes (G1).

The first-crop stallion has sired a graded stakes winner, a restricted stakes-placed runner (Somuchsugar), and four in-the-money runners from 10 starters. He’ll get some precocious winners here and there, but many of his offspring may need a few starts to find the winner’s circle. They should handle middle distances over all surfaces.

My Girl Red is the fourth blacktype earner out of the stakes-placed sprinter Morakami. The mare earned $145,532 in 17 starts. Her most accomplished foal to date is multiple stakes-winning sprinter/miler Gold Street (Street Boss), winner of this year’s Smarty Jones Stakes. Morakami also bore Grade 3-placed miler Oh Marvelous Me and restricted stakes placed turf router Over Thinking. The rest of the distaff line is light on blacktype but includes 2004 Pennsylvania Derby (G2) hero Love of Money. My Girl Red has a yearling full sister and a weanling half-sister by Kitten’s Joy.

Kentucky Derby hero Fusaichi Pegasus is the damsire of 29 graded/listed winners in the U.S. and Canada, including 2014 Spiral Stakes hero We Miss Artie, and last year’s Kitten’s Joy Stakes winner Flameaway. None of his daughters’ offspring have won beyond nine furlongs.

(Into Mischief - Gottahaveadream, by Indian Charlie)

Dayoutoftheoffice, ignored at 19-1, shocked the Schuylerville (G3) field, beating a nice field of fillies by six lengths. The Timothy Hamm trainee galloped six furlongs in 1:10.43 over Churchill’s main oval. Dayoutoftheoffice races for her breeder, Siena Farms, and for Hamm. The daughter of Into Mischief won her debut at Gulfstream Park by 4 3/4 lengths. She has earnings of $79,000.

Into Mischief was last year’s leading sire by earnings and is atop the general sire leaderboard this year. His classy progeny win over all surfaces but are at their best up to nine furlongs.

Dayoutoftheoffice is the third competitor and first blacktype earner out of Gottahaveadream. The mare won only once in 12 starts, but her bloodlines guaranteed her career as a broodmare. Gottahaveadream is a half-sister to the swift Grade 1-winning sprinter, Here Comes Ben (Street Cry (IRE)). Dayoutoftheoffice’s third dam Race the Wild Wind was a Grade 1-winning miler who placed twice at nine furlongs at the Grade 1 and Grade 2 level. Among her descendants are Daredevil, whose first crop includes likely Kentucky Oaks favorite Swiss Skydiver and 2008 Breeders’ Cup Dirt Mile winner Albertus Maximus.

Indian Charlie is the damsire of 47 graded/listed winners in the U.S. and Canada, led by last year’s Champion Male Sprinter Mitole. He lends sprinter/miler speed to the pedigree, although three of his daughter’s offspring are winners at nine furlongs.