Bloodlines: Juvenile colts in the spotlight 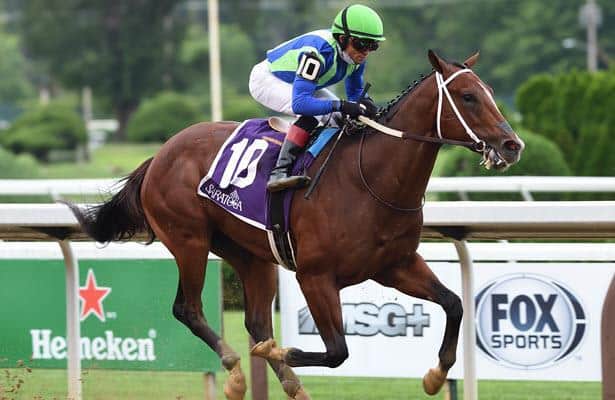 The 2-year-olds of 2020 have quietly appeared across the country while racing fans are focusing on the Kentucky Derby and Oaks scene. Three graded stakes winning 2-year-old colts and geldings deserve a closer look and are names to know heading to the Breeders’ Cup.

Jackie’s Warrior broke sharply from the far outside in the Saratoga Special (G2) and was never seriously challenged, winning by a comfortable three lengths. The Steve Asmussen trainee traveled six furlongs in 1:09.62. Kirk Robison picked up Jackie’s Warrior for $95,000 at the 2019 at the Keeneland September Sale. The bay colt is undefeated in two starts and has earned $127,564.

Maclean’s Music is the sire of a dozen graded/listed winners, including 2017 Preakness winner Cloud Computing and last year’s Champagne Stakes winner Complexity. His son Sonic Brees was third in this year’s Best Pal.

Weston bobbled slightly at the break in the Best Pal Stakes (G2) but came out running to contest the early lead. Drayden Van Dyke steadied the gelding, then moved him to the outside of the pacesetter, Girther. The pair threw it down in the stretch, with Weston gradually inching clear to win by a neck. The Ryan Hanson trainee got six furlongs in 1:12.72 over Del Mar’s main track. Weston is undefeated in two starts and has earned $120,000. Chris Drakos stole the bay gelding for $7,000 out of the 2019 Keeneland September Sale.

Hit It a Bomb, a son of War Front out of a Group 3 winning daughter of Sadler’s Wells, spent his racing career in Ireland and England, traveling to the U.S. twice. He captured the 2015 Breeders’ Cup Juvenile Turf (G1) in a thrilling neck finish over Grade 3 winner Airoforce. Hit It a Bomb was undefeated as a juvenile but couldn’t carry his form as a 3-year old, placing third in a couple of Group Stakes before unplaced results in the Queen Elizabeth II Stakes (G1) at Ascot and the Breeders’ Cup Dirt Mile.

Weston is his sire’s first winner and first stakes winner, and is also the first stakes winner out of Elke, a multiple stakes placed juvenile who earned $122,970 in 13 starts. Weston’s half-sister Miss Segovia (Paddy O’Prado), is a multiple stakes placed juvenile in Panama. Class skips to Weston’s third dam Trumpet’s Blare (Vice Regent), who captured the Arlington-Washington Lassie when it was a Grade 1 event in 1989. Trumpet’s Blare won or placed in 40 starts, mostly stakes races, and earned $532,810. Grade 1 winning handicap horse Albert the Great, and multiple Grade 1 winning turf router Rushing Fall, who captured the 2017 Breeders’ Cup Juvenile Fillies Turf (G1), are part of the family.

Cazadero was the runaway 4 3/4-length victor of the Bashford Manor (G3) but could manage no better than fifth place in the Saratoga Special (G2). Ricardo Santana Jr. mentioned to trainer Steve Asmussen that the colt didn’t handle the track, so we may see Cazadero contest the Iroquois (G3) on the Kentucky Derby undercard.

Pedigree: Cazadero has a miler’s pedigree, and perhaps could go farther with maturity.

Forest Wildcat is the damsire of 74 graded/listed winners. The bulk are sprinter/milers, although Paradise Woods, two-time winner of the 1 1/8-mile Santa Margarita, last year’s Canadian Horse of the Year Starship Jubilee, heroine of the 10-furlong E.P. Taylor, are a couple of exceptions.