Bloodlines: These four 3-year-olds are the best of Florida racing 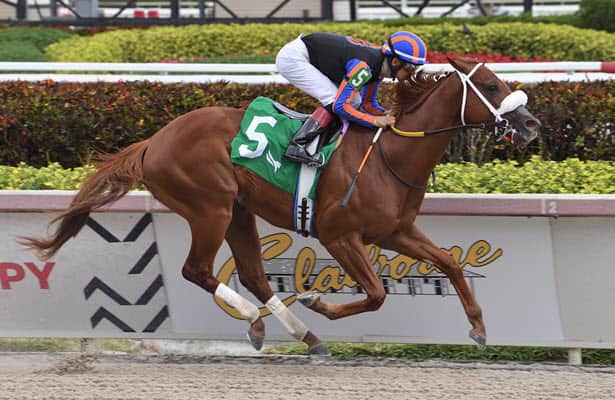 The royally bred Greatest Honour blazed onto the 2021 Kentucky Derby trail. Drain the Clock proved that he’s the best 3-year-old sprinter in Florida. Chess’s Dream earned the status of the first stakes winner for his sire, Jess’s Dream, who is the only son of Rachel Alexandra. Meanwhile, Prevalence, a Godolphin homebred son of Medaglia d’Oro, should be added to your Derby radar.

Let’s take a closer look at the abilities and expectations of these 3-year-old colts.

Pedigree: McGaughey compared Greatest Honour to 2013 Kentucky Derby Orb, who Hall of Fame trainer conditioned. “Their running styles are similar — they both come from behind, but pedigree and looks-wise, they’re different. This horse is taller, while Orb was more compact,” McGaughey said. He also noted, “The farther, the better for him. I think he can run all day.” (Click here for pedigree chart.)

Greatest Honour’s distaff line is full of champions and accomplished stakes horses, where the Belmont Stakes figures prominently. His dam is a half-sister to 2007 Champion 3-Year-Old Filly Rags to Riches, who beat Curlin in an epic battle in the Belmont Stakes. Her half-brother Jazil also captured the Belmont Stakes, while Casino Drive won the Peter Pan (G2). That one was trained in Japan and shipped with the Belmont Stakes as his ultimate goal, but unfortunately, had to scratch from the race due to a stone bruise. The final stakes-winning half-sibling is the long-winded Man Of Iron, winner of the 2009 Breeders’ Cup Marathon.

The class doesn’t stop with Tiffany’s Honour’s siblings. Her half-sister Teaming (Storm Cat) has started her own dynasty of stakes winners, including Hollywood Starlet (G1) heroine Streaming, plus stakes winners Cascading and Counterforce. The brilliant and pricy ($3.65 million) Cezanne is a grandson of Teaming. He was a Kentucky Derby buzz horse for Bob Baffert last year before a fourth-place finish in the Shared Belief Stakes. Cezanne is back in training, and perhaps we’ll see what he can do as a 4-year-old.

Greatest Honour’s second dam is the Rene-de-Course (superior female) Better Than Honor (Deputy Minister). Her sole stakes victory was in the Demoiselle Stakes (G2), but she finished a bad luck second in the Comely Stakes (G3), beaten a neck, and was again foiled, by a head, in the Acorn Stakes (G1). She placed second in the Mother Goose Stakes (G1) in her career finale. Better Than Honor received her class from Kentucky Oaks heroine Blush with Pride (Blushing Groom), who is also a Rene-de-Course. The hits keep coming with Best in Show (Traffic Judge), who earned 1982 Broodmare of the Year honors.

Fresh off a 7 1/2-length victory in the Limehouse Stakes, Drain the Clock proved that he’s the best 3-year-old sprinter in Florida with a decisive 6 1/4-length victory in the Swale (G3). The Saffie Joseph Jr. trainee is undefeated and untested in four of five starts. The only mark on his otherwise perfect record is the Jean Lafitte Stakes, where he lost the rider due to a broken iron and didn’t finish the race. Owned by the partnership of Slam Dunk Racing, Madaket Stables LLC, Wonder Stables, and Michael Nentwig, Drain the Clock has a 5: 4-0-0 record and $152,550 in earnings. He hasn’t competed in a Kentucky Derby qualifier and hasn’t raced beyond seven furlongs.

Pedigree:  Drain the Clock has the conformation and pedigree of a sprinter/miler, although he could be capable of 1 1/6-miles, given his talent. Turf could be an option, as his half-sister Amazing Audrey (Bodemeister) spent her career on the lawn, and there is plenty of turf class in his pedigree. (Click here for pedigree chart.)

Maclean’s Music won his only start before injury sent him to the breeding shed.

The Stonestreet Stable homebred retired to Hill’ n’ Dale and stood his first year at stud in 2013 for $6,500. His fee is now $25,000 after six racing crops. His first crop included Preakness winner Cloud Computing and four other graded/listed winners.

The son of Distorted Humor is represented by Jackie’s Warrior, who swept last year’s Saratoga Special, Hopeful Stakes, and Champagne Stakes, one of only a few colts in history to complete this feat. Maclean’s Music’s son Complexity won the 2018 Champagne Stakes.

So far, Maclean’s Music’s progeny are firmly sprinter/miler oriented. Cloud Computing (out of an A. P. Indy mare) is his only stakes winner beyond 1 1/16 miles.

Drain the Clock’s pedigree is a good example of class skipping a generation. His dam Manki hit the board in two of four starts but never made it to the winner’s circle. She came close, losing the head-bob in her second start. Drain the Clock is her fourth foal and first to earn blacktype. She slipped (aborted) in 2019 but bore a Mineshaft colt last year.

The Maclean’s Music/Arch bloodline cross has resulted in four winners from six starters and one stakes winner. One, Bay Muzik, is a Grade 2-placed turf sprinter.

Chess’s Dream benefited from a patient ride by Tyler Gaffalione in the Kitten’s Joy Stakes (G3). The eager colt was under a tight hold behind the pace for much of the race. Gaffalione pushed Chess’s Dream through a narrow opening on the rail at the top of the stretch, and the pair opened up to win the one-mile turf event by a comfortable two lengths. The Mike Maker trainee graduated in his previous start by five lengths traveling seven furlongs over the lawn. His only off-the-board finish was in the In Reality Stakes in a dirt experiment. Loren Nichols bred chess’s Dream. A bargain $25,000 Fasaig Tipton July yearling purchase, the bay colt races for the partnership of Michael Dubb, Steven Bouchey, Bethlehem Stables LLC and Chester Bishop. Chess’s Dream has a 5: 2-2-0 ($108,980) record.

Pedigree: Chess’s Dream has a miler pedigree and a definite preference for turf. (Click here for pedigree chart.)

Chess’s Dream is the first stakes winner for his sire Jess’s Dream (Curlin - Rachel Alexandra, by Medaglia d’Oro). There were enormous expectations for the son of Curlin and 2009 Horse of the Year Rachel Alexandra, and he is one of only two foals out of the mare. His half-sister Rachel’s Valentina won the Spinaway (G1) and placed in the 2015 Breeders’ Cup Juvenile Fillies and the Ashland Stakes (G1) the following year. Jess’s Dream won his debut, but unfortunately, was trotted off to the breeding shed after injury. He stood his first year at stud in 2017 for $5,000 at Ocala Stud in Ocala, Florida, and his 2021 fee is $4,000. He has seven winners from 22 starters.

Chess’s Dream’s big brother Casa Creed (Jimmy Creed) won the 2019 Kitten’s Joy Stakes when the race was contested at 7 1/2-furlongs. Casa Creed also won the National Museum Of Racing Hall Of Fame Stakes (G2) and was in the money in five other stakes, including the Fourstardave Handicap (G1).

Chess’s Dream is the third foal out of the unraced Achalaya. The mare has an unnamed yearling colt by Distorted Humor. The second dam is the hard-knocking Wild Heart Dancing (Farma Way). The mare racked up one Grade 2 and three Grade 3 victories over turf and dirt, winning stakes from five to nine furlongs. She earned $597,641 in 25 starts. Wild Heart Dancing’s half-brother  Man From Wicklow (Turkoman) was a multiple graded winning turf router, and he captured the Gulfstream Park Breeders’ Cup Handicap (G1), which was his sole Grade 1 victory.

Prevalence is one to watch after his smashing 8 1/2-length winning debut at Gulfstream Park on Jan. 23. Facing a full field of 11 other competitors, Tyler Gaffalione hustled Prevalence out of the gate from post 6, and the pair secured a spot at the rail, where they were part of a three-horse cavalry charge. Tyler let out a notch around the turn, and Prevalence galloped away under his own power under a hand ride. The runner-up was Triple Crown hero Justify’s half-brother Stage Raider (Pioneerof the Nile). The third-place finisher Ghazaaly (Curlin) is related  to Pacific Classic winner Higher Power. Conditioned by Brendan Walsh, Prevalence is one to watch in upcoming stakes.

Pedigree: This Godolphin homebred has the pedigree to run all day, although there’s plenty of classy speed in his distaff line. Additionally, he has turf attributes in his pedigree, and a couple of his half-siblings won on the lawn, so the option is there if the Derby dreams don’t pan out. (Click here for pedigree chart.)

Prevalence is the fifth foal out of the unraced Enrichment. His half-brother Estihdaaf (Arch) won the 2019 U.A.E. Two Thousand Guineas (G3 UAE), and half-sister Libreta (Girolamo) won the restricted Park Avenue division of the New York Stallion Stakes. Enrichment has an unnamed 2-year-old son of Quality Road and a yearling son by Frosted.

Enrichment has three stakes-winning siblings. The most accomplished is her full sister, the versatile Better Lucky, a Grade 1 winning miler over the lawn, who had runner-up finishes in the Madison (G1) over Keeneland’s Polytrack, and she was also second in the 2014 Breeders’ Cup Filly and Mare Sprint (G1) on the dirt. The mare amassed $1,278,950 in 20 starts. She bore a pair of stakes-placed runners; Kentucky Wildcat (Tapit), who placed in the 2019 Sam F. Davis (G3), and his full brother Tapwood, who was third in last year’s Saratoga Special.