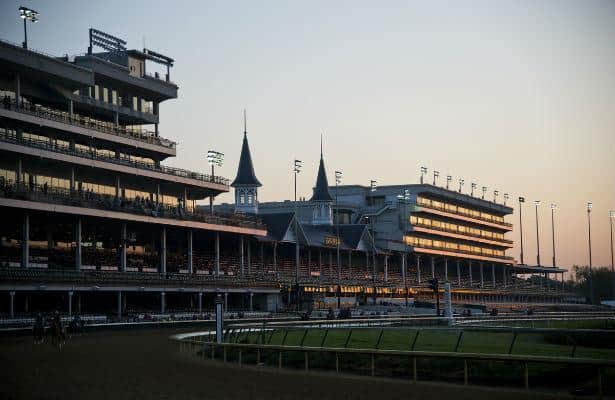 The Bashford Manor Stakes (G-3) is the first chance for two-year-old colts to pick up black type earnings. Typical of early season juvenile stakes races, distance challenged sprinters are prevalent in the six furlong event.  The last colt to win/place in the Grade 3 event and have an influence on the following year’s Classics was 1989 Bashford Manor champ Summer Squall.  The back to back winners in 2006 and 2007, Circular Quay and Kodiak Kowboy, became multiple graded sprinter/milers. Since then, none of the top three finishers in the Bashford Manor have continued on to notable careers. This year, seven colts and a gelding will contest the Bashford Manor. It’s doubtful that any of them will be around for a shot at the 2016 Kentucky Derby, but you never know.

HE'S COMIN IN HOT (Early Flyer - Shocktime, by Langfuhr) proved third time’s the charm in his last, triumphing over a maiden field by 4 ½ lengths in a sharp :57.96 for five furlongs. The gelding is a first foal and his dam owns minor blacktype. He’s Comin In Hot has speed on the rail and the highest speed figures in the field. Trainer Bret Calhoun and jockey Jamie Theriot have teamed for a 3-2-1-0 record in the last two weeks.

SHOOT CRAPS (Trappe Shot - Goldeni, by Gone West) found some trouble in his debut, but showed his determination in his second start, hooking up with Show Bound for much of the race before putting that one away and prevailing by a steady ¾ length over the lawn. The son of freshman sire Trappe Shot has little blacktype in his immediate female family, however, many of his dam’s siblings were proficient over both dirt and turf. Shooting Craps was supplemented to the Bashford Manor. Trainer Dane Kobiskie hits with 20% for the turf to dirt angle, but has a 0-4 graded stakes record.

SHOW BOUND (Warrior's Reward - Spanish Cat, by Hennessy) fought on the rail against Shoot Craps in his debut for much of a five furlong turf race.  Show Bound tired slightly at the end and finished third.  Snow Bound has a strong sprint-oriented pedigree. His sire Warrior's Reward was a top freshman sire last year and is currently ranked #6 on the second crop sire list. Show Bound’s second dam is multiple graded stakes placed. Show Bound breezes regularly at Churchill and should be stronger in his next start. Trainer Steve Asmussen has won the Bashford Manor four times, including last year with Cinco Charlie.

PATRICK ROCKS (Awesome of Course - Dewars Rocks, by Big Mukora) showed improvement in his second start, tracking the pace setter from second and then drawing off to win by an easy length. His dam is a G-3 winning sprinter, but so far, none of her eleven offspring have earned blacktype.  Patrick Rocks is based in Maryland and ships in for John Robb. The trainer hits with 21% shippers, but Patrick Rocks is shipping, facing winners and a longer distance.  Not an easy task for a young horse. Exotics contender.

DOTHAT DANCE (Louis Quatorze - Guess the Dance, by Austin Powers (IRE)) was ten lengths out of it in the early stages of his debut.  He made up some ground around the far turn, however, it was a matter of catching up to slowing horses, not flashing any real speed. The son of Preakness Stakes winner Louis Quatorze has the pedigree to relish two turns. There’s class farther back in his pedigree, but nothing notable in the first two generations. Trainer Jimmy Corrigan has a 12% win rate with two year olds. Exotics contender.

SAPPHIRE STORM (Primal Storm - Bluehue, by Woodman) battled fiercely every step of the way in his last race and got the win on a nose bob.  While the colt’s tenacity isn’t in question, his class is. He has no notable blacktype in three generations of his distaff line and his frantic victory was against maidens in Indiana in an average 1:00 flat for five furlongs. The colt is the lesser regarded stablemate of Show Bound.

JUSTANOTHERMORGAN (Zavata - Bond Beauty, by High Yield) is the most experienced colt in the field with four starts under his girth. He was passed late to finish second by 1 ½ lengths in his last start as the favorite, when he shipped to Pimlico against easier company. Justanothermorgan has no blacktype in the first two generations of his female family. He’s improved his speed figures in every start and trainer Tommy Short scores with 23% beaten favorites, but the colt is showing signs of a good/bad race cycle.

ROMAN'S CHANCE (Sun King - Dreams On Tap, by Tapit) hasn’t come closer than 3 ¼ lengths to the winner of any of the three races where he’s competed.  While he was supplemented to the Bashford Manor, Roman’s Chance is shipping, facing tougher company and trying a new distance. He should enjoy the extra real estate, but class is suspect. Trainer Gennadi Dorochenko has a 3-52 record in stakes races. Pass.

HE'S COMIN IN HOT is speed on the rail. SHOW BOUND hasn’t raced over the Churchill dirt, but this is his home base. He should progress here.  SHOOT CRAPS also has an excellent chance to win. Keep an eye on two longshots. PATRICK ROCKS could continue to improve. DOTHAT DANCE could put it together in his second start.

Barn Tour: Glatt is off to a good start this winter at Santa Anita
Check out Barn Tours on Horse Racing Nation Bret C...
x