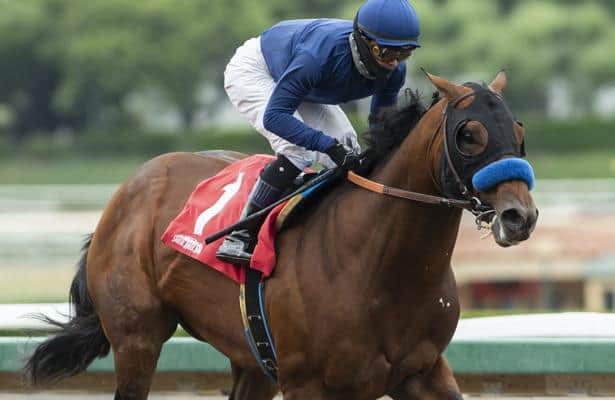 Bob Baffert was hit by the double whammy of Nadal’s retirement and, just days later, Charlatan’s injury, subtracting both of them out of the 2020 Kentucky Derby picture. But the Hall of Fame trainer's Derby dream hasn't died. He has two well-bred, expensive backup plans emerging from the stable and likely headed toward stakes company. Let's see if they're made for the Triple Crown series.

Pedigree: Cezanne has the bloodlines and conformation to handle middle to classic distances.

Cezanne is a direct descendant of the superior females Best in Show, Blush with Pride and Better than Honor, who are his fifth through third dams, respectively. That means Cezanne’s second dam, Teeming, is a half-sister to champion 3-year-old filly Rags to Riches, who fought with Curlin in an epic Belmont Stakes battle, defeating him by a head. Teeming is also a half-sister to Belmont Stakes winner Jazil and Peter Pan winner Casino Drive, plus she is a three-quarter sister to Breeders’ Cup Marathon hero Man of Iron.

Teeming’s daughter, Achieving, scored only one victory in five starts. But the class of her family has been passed along to her offspring.

Cezanne is a fourth foal, and two of his siblings own blacktype. His three-quarter brother Counterforce (Smart Strike) is a 24-race veteran with earnings of $323,708. Counterforce won the 2016 six-furlong Bachelor Stakes at Oaklawn Park and placed in three other stakes, all sprints.

Cezanne’s half-sister, Arabian Hope, won the listed Ganton Stakes in England and placed in the Falmouth (G1) at a mile. She also won the International Istanbul Trophy (G3) in Turkey.

Cezanne’s half-brother, J and L, was unplaced in two starts. Achieving has an unnamed 2-year-old colt by Liam’s Map and an unnamed yearling full sister to Cezanne.

Overall, the Smart Strike/A.P. Indy cross has resulted in 21 graded/listed winners. The bulk are best between eight and nine furlongs.

Upon first glance, Cezanne could still prove to be $3.65 million well spent. ??

Baffert-trained Ragtime Blues is another up-and-comer on the Derby trail. The son of Union Rags finished second in his 2-year-old debut, sprinting 5 1/2 furlongs at Los Alamitos. He didn’t see action until this April, when he graduated in an Oaklawn Park six-furlong maiden event, the day before stablemate Eight Rings finished off the board in the Bachelor Stakes. A month later, Ragtime Blues confirmed his quality with a 2 1/4-length victory over Zimba Warrior sprinting six furlongs over Santa Anita’s main track.

Belmont Stakes hero Union Rags has 14 graded/listed winners, led by multiple Grade 1 winner Paradise Woods, who earned $1,123,890 in 18 starts. The bulk of Union Rags’ offspring are best up to nine furlongs. Two of his foals, Grade 3-winning turf router Big Bend and French listed winner Musawaah, have been successful at 10 furlongs and farther.

Ragtime Blues’ dam, Home of the Blues, never visited the winner's circle in 10 lifetime starts. But her foals are competitive. Ragtime Blues’ older half-brother, Tough Love, has hit the board in four of five starts. An unnamed 2-year-old Carpe Diem brother recorded a 21.1 work at the 2020 OBS 2-year-old sale and hasn’t gone through the ring as of this writing. Home of the Blues has a yearling Dialed In filly and an unnamed weaning colt by Bernardini.

Congratulations to all the partners on Ragtime Blues victory today in the 6th race @santaanitapark for trainer Bob Baffert, Irad Ortiz was aboard. Mo Hawk was 3rd for #StarlightRacing #SF #Madaket pic.twitter.com/TTmeh11za6